In the latest umlaut Audit Report, Rakuten Mobile achieves in Tokyo 920 out of 1,000 points and scores “very good” only about one year after launch and shows the potential of OpenRAN under real-life conditions. 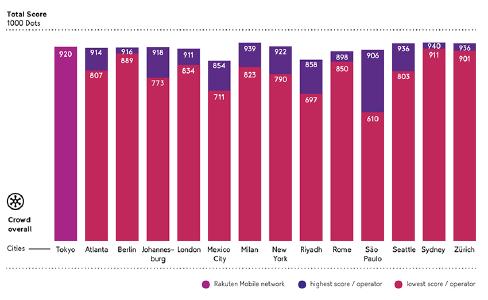 (PresseBox) ( Aachen, 07.06.21 )
Aachen/Tokyo, June 7, 2021 – umlaut, the global consultancy company and world leader in mobile network testing and benchmarking, has analysed the performance of the OpenRAN mobile network of Rakuten Mobile in Tokyo. Based on its methodology established as the global de-facto industry standard, umlaut compared the Rakuten Mobile OpenRAN network with the leading mobile networks in the cities Atlanta, Berlin, Johannesburg, London, Mexico City, Riyadh, Rome, Sao Paulo, Milan, New York, Seattle, Sydney and Zurich. Conclusion: The Rakuten mobile network performs competitively to the top networks in the 13 cities showing a “very good” performance with an umlaut score of 920 points out of 1,000.

This report is of special interest as it compares the new OpenRAN approach with conventional networks. The main difference of OpenRAN is the use of off the shelf hardware and a software-based feature implementation for cellular radio networks, as far as possible. The foundation of the OpenRAN ecosystem was made by large mobile operator groups encouraging software companies to develop a technology which implements the radio network features of 4G and 5G with software running on general purpose processing platforms. Creating an alternative to purchasing specialised radio network hardware of the incumbent suppliers. This shall add flexibility in selecting the best-of-breed RAN components allowing operators building multiple generation networks. However, OpenRAN networks shall at least perform on par with conventional network implementations or even better.

“Congratulation to Rakuten Mobile. The OpenRAN network achieves an umlaut score of 920 points in Tokyo and the grade “very good”. This is remarkable, as, on global level, Rakuten has already a very good performance level – even before its first anniversary of network launch,” says Hakan Ekmen, CEO Telecommunication at umlaut.

Mobile networks are undergoing a significant transformation, with a movement away from the closed, proprietary systems of legacy networks to more open, efficient and flexible systems known in the industry as OpenRAN. OpenRAN solutions with truly open interfaces compete with traditional network implementations. OpenRAN promises high flexibility and faces complexity challenges, while conventional solutions deliver clear responsibilities for the interfaces and an optimised interworking between them.

Worldwide Rakuten is one of the first large scale adopters of OpenRAN. In April 2020, Rakuten launched the first commercial 4G OpenRAN network in Japan. umlaut compared the Rakuten OpenRAN network of the 10-million-inhabitant metropolis of Tokyo with the network performance of other cosmopolitan cities all over the world. The umlaut Score evaluates three main categories: Coverage – Where is the mobile network available? Speed – How many speed samples are good for supporting popular services like basic internet, HD Video and UHD Video? Latency – How many of the latency executed on users’ handsets are good enough for OTT voice services and Gaming? The proven methodology was used to calculate the umlaut Score for the mobile networks in the selected cities. For a fair comparison, umlaut selected the lowest and highest achieved score of the mobile networks in each city to directly compare it with the Rakuten OpenRAN network in Tokyo.

Being at the core of innovation, umlaut has a strong interest to evaluate the customer experiences of those front-running networks and compare it with network performance of established player. The aim is to offer a unique perspective into this new ecosystem.

Within an able and agile collective of 20 consultancies and engineering firms spread across 50 locations all over the world, 4,500 specialised experts and engineers provide innovative solutions and transformations across all industries and their various intersections as well as serving the public sector and developing organisational cultures, structures and processes.
For more information please visit: umlaut.com.