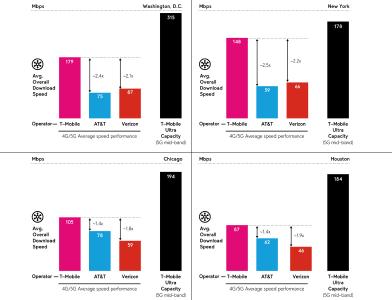 (PresseBox) ( Morristown, 26.01.21 )
January 26, 2021 – umlaut, the global consultancy company and world leader in mobile network testing and benchmarking, analyzed the mobile networks in the US metropolises Washington D.C, New York, Chicago, and Houston. Using the latest 5G capable smartphones (Samsung S20+) in mobile experience tests, the downlink and uplink performance of data services were tested and measured by drive tests. Commissioned by T-Mobile, the measurements were executed in December 2020 and January 2021. The test area, the drive routes and measurement times were defined by umlaut.

Hakan Ekmen, CEO Telecommunication at umlaut, explains: “Congratulations to T-Mobile. In average, T-Mobile shows the fastest data speed performance in the tested cities. On top, T-Mobile’s 5G availability is excellent with numbers clearly above 90% for each market. With our analysis we are fairly and transparently assessing the US digital infrastructure.”

The drive tests were conducted during December 2020 and January 2021 and covered the inner-city areas of the four US metropolises Washington D.C, New York, Chicago and Houston. The drive routes added up to 1927 miles thus representing a total area of 3489 square miles. The test areas selected account for more than 6500 test samples per operator.

T-Mobile shows the highest average download and upload speeds in all four cities up to two times faster than all other mobile networks. The test devices were operated in 5G preferred mode, which means they attach to 5G whenever it is available. Otherwise, the devices typically switch to 4G.
The 5G average download speed delivered by T-Mobile‘s ‘Ultra Capacity’ (5G mid-band) exceeds 300 Mbps in Washington D.C., 170 Mbps in New York, 190 Mbps in Chicago and 180 Mbps in Houston. In addition, in all four cities, T-Mobile provided top 5G availability with more than 99% in Chicago and 94% in Washington D.C., New York and Houston. In Washington D.C., AT&T showed 95% and Verizon 70%. In New York AT&T has shown 90% and Verizon 51%. In Chicago AT&T showed 87% and Verizon 92% and in Houston AT&T showed 95% and Verizon 61%.
The latest report (https://www.umlaut.com/en/benchmarking/usa) is the start of a series of studies with focus on 5G, metropolitan as well as rural areas, markets, states and more, based on umlaut drive test and crowdsourcing measurements.

umlaut is a global, full-service, cross-industry, end-to-end company that offers advisory and fulfilment services to clients all over the world. In-depth domain expertise, broad practical knowledge and interdisciplinary collaboration allow them to add value, quality and focus to their clients’ organizations, services and products, in disruptive times in which industries are increasingly converging.

Within an able and agile collective of 20 consultancies and engineering firms spread across 50 locations all over the world, 4,500 specialized experts and engineers provide innovative solutions and transformations across all industries and their various intersections as well as serving the public sector and developing organizational cultures, structures and processes.

umlaut and Velodyne to rock the ADAS/AV sensor market