Company founder dies at the age of 90 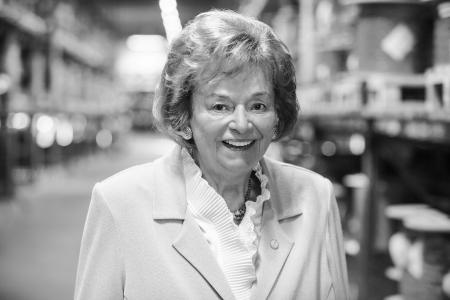 (PresseBox) ( Stuttgart, 27.04.21 )
She was a fantastic businesswoman and made business history: Ursula Ida Lapp, founder of LAPP, died last Sunday at the age 90 in Stuttgart, Baden-Württemberg. "Our mother was the soul of the company. We will miss her terribly, both as a mother and as a wise advisor," says Andreas Lapp, Chairman of the Board of LAPP Holding AG.

Ursula Ida Lapp was an entrepreneur with passion and drive. Together with her husband Oskar Lapp (1921-1987), she established a company that is now the world market leader for integrated connection solutions. The success story began at the end of the 50s when Oskar Lapp developed the first rectangular connector for industry and the first industrially manufactured power and control cable. This invention revolutionised connection technology around the world.

This would not have been possible without Ursula Ida Lapp. The Lapps founded their company U.I. Lapp KG in 1959, where U.I. stands for Ursula Ida. At the beginning, business was run from their home’s garage in Stuttgart’s district of Vaihingen. Oskar Lapp did sales, while Ursula Ida Lapp took care of bookkeeping, advertising and their small children at home. She would often travel to the freight yard with her hand cart to take delivery of the cables as they came in – cables that the enterprising couple had made to order in the beginning – or to ship them on there and then.

Together, the Lapps established the first brand in the world of cables: ÖLFLEX® delivered the right product at the right time. The Lapps set quality standards that are still applicable around the world today in the field of cable production. Demand was huge. In 1963, the company opened the first factory of its own to produce ÖLFLEX® cables. Following Oskar Lapp's death in 1987, Ursula Ida Lapp took over leadership of the company together with her sons Siegbert and Andreas. The company continued to increase its presence on the international stage. With its headquarters in Stuttgart, Germany, LAPP is a leading supplier of integrated solutions and branded products in the field of cable and connection technology.

Political, social and cultural engagement were also always close to her heart. In addition to generous donations to establishments in India as well as institutions in and around Stuttgart, she founded the Oskar Lapp Foundation with her sons in 1992. Ursula Ida Lapp was also involved in the regional parliament for four years. Ursula Ida Lapp has won many awards for her achievements as a businesswoman and for her social engagement, including the Order of Merit of the Federal Republic of Germany and the Business Medal of the State of Baden-Württemberg.

LAPP has remained in continuous family ownership to this day. Ursula Ida Lapp is survived by three sons, two of whom are active in the company. Two of the company founder’s grandchildren also already work at LAPP. Matthias Lapp (38) is CEO for the Europe region, including South America, Africa and the Middle East, and Alexander Lapp (36) is responsible for digitalization and e-business. "That was our mother's greatest wish: to see her grandchildren take on responsibility within the company too. I'm glad that she lived to see it come true. We will continue our company in her spirit," says Chairman of the Supervisory Board Siegbert Lapp.

The burial will be held with her closest family and friends.

Headquartered in Stuttgart, Germany, LAPP is a leading supplier of integrated solutions and branded products in the field of cable and connection technology. The company’s portfolio includes standard and highly flexible cables, industrial connectors and cable entry systems, customized system solutions, automation technology and robotics solutions for the intelligent factory of the future, as well as technical accessories. LAPP’s core market is in the industrial machinery and plant engineering sector. Other key markets are in the food industry as well as the energy and the mobility sector.

LAPP has remained in continuous family ownership since it was founded in 1959. In the 2019/20 business year, it generated consolidated revenue of 1,128 million euros. LAPP currently employs approximately 4,575 people across the world, has 20 production sites and around 43 sales companies. It also works in cooperation with around 100 foreign representatives.