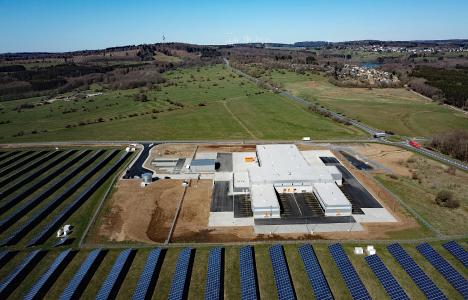 (PresseBox) ( Weinheim, 03.05.21 )
.
trans-o-flex continues to expand its network: Expressdienst, which specialises in the carriage of pharmaceuticals and sensitive goods, today started operating another logistics centre in Driedorf, Hesse. "The new site, which we can commence operations today as planned despite the coronavirus pandemic, will further increase the efficiency of our trans-o-flex Express and ThermoMed networks and create new synergies between the two networks," said trans-o-flex CEO Wolfgang P. Albeck. With a total investment of around 13 million euros, a hub has been built on a 41,649-square-metre site in the Potsdamer Platz industrial estate in Driedorf, where parcels and pallets can be handled in two different temperature zones. "trans-o-flex is the only service provider in Germany that can actively monitor, control and document the temperature in the entire logistics chain between 2 to 8 and 15 to 25 °C," Albeck explained.

One facility for different temperature zones

Previously separate facilities for the transport of refrigerated pharmaceuticals (2 to 8 °C) in the trans-o-flex ThermoMed network and of medicines in the room temperature range (15 to 25 °C) in the trans-o-flex Express network will be combined at the new centre. For this purpose, a separate cold storage cell for handling at 2 to 8 °C has been installed in the building where consignments are sorted and handled at a temperature of between 15 and 25 °C. While these cold storage cells are controlled by air-conditioning systems from the very beginning, the rest of the hub is built in such a way that it reaches the specified temperature on more than 80 per cent of all days through the principle of free cooling. The temperature in the hub is regulated by a controlled ventilation system. "That saves energy," explains Albeck. "However, to ensure the temperature range of 15 to 25 °C, we will be installing additional air-conditioning technology for extremely hot days."

At the new site, trans-o-flex will have a total of 81 loading and unloading gates with only around 5,000 square metres of warehouse space. This is thanks to a Y-shaped construction that reduces space requirements and optimises handling at the same time. Albeck: "With the same handling space, we can install more loading and unloading gates in the Y-shaped construction compared to the traditional rectangular design. We also shorten the sorting distances in the building and thus save time in daily operations."

"The Driedorf industrial area is ideally connected in terms of transport," said Albeck. "Without having to pass through the town of Driedorf, the trans-o-flex vehicles reach the B255 east-west link road in one minute and the A45 south-north link road in 9 minutes." To be prepared for the increased use of electric vehicles, there are charging points for electric cars in the staff car park. There are also power connections at the loading and unloading gates to regulate the temperature of vehicles with green electricity. In addition, special connections for charging battery-electric delivery vehicles have been prepared.

Last but not least, the location of the hub right next to a solar farm is ideal for the company. "trans-o-flex has been sourcing its electricity almost exclusively from renewable energy sources since 2008 and documents, among other things, its climate footprint and CO2efficiency in its annual sustainability report." trans-o-flex aims to be completely carbon-neutral by 2050.

trans-o-flex core areas of expertise are logistics solutions for the pharmaceutical, cosmetics and consumer electronics industries and for other high-end, sensitive goods. The company has built up transport networks that convey goods at 15 to 25 degrees Celsius or at 2 to 8 degrees Celsius actively temperature-controlled and documented in accordance with EU regulations for the transport of pharmaceuticals. These EU-GDPs require the highest standards for safety and security, cleanliness, reliability and transparency, from which all trans-o-flex customers benefit. trans-o-flex operates internationally via the networks EUROTEMP (temperature-controlled logistics) and EURODIS (in 36 European countries). In contrast to conventional parcel services or forwarding agencies, trans-o-flex delivers goods in parcels as well as on pallets. trans-o-flex Express also offers numerous express and time-slot deliveries, special services such as dangerous goods transportation (without minimum quantity regulation), consignment consolidation or direct deliveries. The express shipments are complemented by warehousing, order picking and individual value-added services such as serialisation of pharmaceuticals. This means that the company covers the entire logistics chain from procurement through to fulfilment. The annual business volume of the trans-o-flex companies, which employ a total of around 2,150 people, amounted to around 515 million euros in 2020. More information is available at www.trans-o-flex.com.