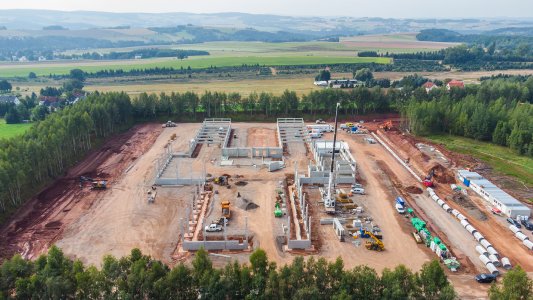 (PresseBox) ( Weinheim, 08.09.21 )
trans-o-flex's Expressdienst yesterday laid the foundation stone for a new transshipment centre in Wildenfels near Zwickau. This service provider, who specialises in express shipping and logistics solutions for manufacturers in the pharmaceutical, cosmetics and consumer electronics industries as well as other high-value and sensitive goods, is having a highly efficient and eco-friendly sorting centre built on a 30,000-square-metre site and costing tens of millions of euros. The special Y-shape of the facility allows a total of 99 gates for fast loading and unloading in a transshipment building of only 5,000 square metres. Wildenfels is scheduled to start operations in spring 2022. Including drivers employed by transport partners, up to 150 people will work from the site.

"We also have our sustainability goals in mind for every new building that increases the efficiency and capacity of our networks," said CEO Wolfgang P. Albeck at the laying of the foundation stone. The company aims to be completely carbon neutral by 2045 at the latest. "We are therefore also increasing our investments for high-level thermal insulation, thereby reducing operating costs and climate impact. The special temperature control of the facility, which is necessary for service purposes, is carried out using an eco-friendly and economically favourable combination of free cooling via supply air grilles and exhaust air fans as well as an air conditioning system." It is heated with gas dark radiators, LED lights ensure sustainable workplace safety. As a further investment in greater sustainability, all rain that falls on roofs and sealed surfaces of the site is not drained into the sewage system. Instead, a special pipe system was laid under the yard surface to collect all rainwater. The pipes have valves through which the water is released in a controlled manner. "In this way, we enable natural drainage despite having developed the site," trans-o-flex CEO Wolfgang P. Albeck explained to the guests at the laying of the foundation stone. "As a result, we relieve the local sewer network and the sewage treatment plant, do something against the sinking of the groundwater level and still save on rainwater charges." The system is dimensioned in such a way that it can completely absorb the rainfall of a so-called once-in-a-century downpour without overflowing. The system thus has a balancing effect and can mitigate the consequences of both heavy rainfall and dry periods. To prevent tyre abrasion or oils from entering the groundwater, a lamella separator filters such substances out of the surface water before it is discharged into the environment in a controlled manner.

The centre is also prepared for increasing electromobility with charging points being installed for employees' electric vehicles and connections being made for charging delivery vehicles. From an operational point of view, the new centre will increase network efficiency, among other things because two previously separate facilities will be merged here. Albeck: "The new branch will be a transshipment centre for our trans-o-flex ThermoMed refrigerated network (2 to 8 degrees Celsius) as well as for trans-o-flex Express with its non-temperature and actively temperature-controlled shipments in the ambient range (15 to 25 degrees Celsius)."

Tino Kögler, mayor of the town of Wildenfels, also emphasised trans-o-flex's sustainability strategy at the laying of the foundation stone. "We are pleased not only because with trans-o-flex we are getting a company that is creating jobs here," said the 50-year-old. "Rather, trans-o-flex is very conscious of its responsibility as a logistics service provider and as a company that primarily transports pharmaceuticals and other sensitive goods. Not least during the coronavirus crisis, it has made an important contribution to supplying the population not only with medicines, but also with disinfectants and urgently needed protective equipment. And the sustainable investments here at the site are a good example for me of how profitability and environmental protection can be combined."

trans-o-flex's core areas of expertise are logistics solutions for the pharmaceutical, cosmetics and consumer electronics industries and other high-end, sensitive goods. The company has built up transport networks to carry goods at 15 to 25 degrees Celsius or 2 to 8 degrees Celsius actively temperature-controlled and documented in accordance with EU regulations for pharmaceuticals transport throughout Germany and Austria. These EU-GDPs require the highest standards for safety and security, cleanliness, reliability and transparency, from which all trans-o-flex customers benefit. trans-o-flex operates internationally via the networks EUROTEMP (temperature-controlled logistics) and EURODIS (in 36 European countries). In contrast to parcel and groupage services, trans-o-flex delivers parcels and pallets on a consolidated basis. trans-o-flex Express offers numerous express and time-slot deliveries, special services such as hazardous goods transportation (without minimum quantity regulation), consignment consolidation or direct deliveries. The range of services is complemented by warehousing, order picking and individual value-added services such as serialisation and deserialisation of pharmaceuticals. This means that the company covers the entire logistics chain from procurement through to fulfilment. The annual turnover of the trans-o-flex companies, which employ a total of around 1,954 people (FTE, end of 2020), amounted to around 515 million euros in 2020. More information is available at www.trans-o-flex.com