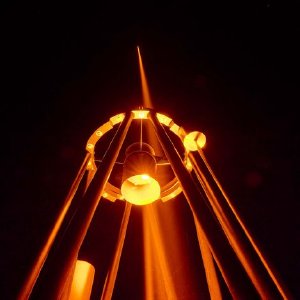 (PresseBox) ( Gräfelfing, 31.08.21 )
A powerful experimental laser developed by the European Southern Observatory (ESO), TOPTICA Projects1 and other industry partners2 passed a key test last month at the Allgaeuer Volkssternwarte Ottobeuren observatory in Germany. The adaptive-optics laser has important additional capabilities compared to existing systems. It is to be installed at the European Space Agency’s (ESA) Optical Ground Station in Tenerife, Spain, in the frame of the ESO–ESA Research & Development collaboration. The higher laser power and its chirping system will lead to significant improvements in the sharpness of astronomical images taken with ground-based telescopes. The technology also opens the door for developments in laser satellite communication.

Astronomical adaptive optics refers to systems on ground-based telescopes that correct for the blurring effect brought about by turbulence in the Earth’s atmosphere — the same effect that causes stars seen from Earth to “twinkle”. To remove the distortions, these systems require a bright reference star close to the object of study. Because these stars are not always conveniently placed on the sky, astronomers use lasers to excite sodium atoms at 90 km altitude in the Earth's atmosphere, creating artificial stars near the field of interest that can be used to map and correct for the atmospheric turbulence.

The narrow band highest optical quality laser power of 63 Watts locked to the sodium wavelength as such is already a significant leap forward compared to current astronomy laser technology. However, a second important step has been the experimental frequency chirping system developed and implemented by TOPTICA Projects in collaboration with ESO, that is targeted to also improve the signal-to-noise of the adaptive optics system.

Chirping consists in rapidly changing the frequency to which the laser is tuned. This increases the number of sodium atoms excited by the laser, making the artificial star brighter and thus improving the turbulence correction. TOPTICA has installed the chirping prototype on the ESO 63 Watts CaNaPy laser and, together with ESO, has commissioned on sky both the laser and its novel chirping system.

Once the technology is installed at the ESA Optical Ground Station in Tenerife — a collaborative project between ESO and ESA — it will provide both organizations with opportunities to advance the use of laser guide star adaptive optics technologies not only for astronomy but also for satellite optical communication.

About ESO
ESO, the European Southern Observatory, is the foremost intergovernmental astronomy organisation in Europe and the world's most productive astronomical observatory. ESO provides state-of-the-art research facilities to astronomers and is supported by Austria, Belgium, the Czech Republic, Denmark, Finland, France, Germany, Ireland, Italy, the Netherlands, Poland, Portugal, Spain, Sweden, Switzerland and the United Kingdom, along with the host state of Chile. Several other countries have expressed an interest in membership.

ESO's main mission, laid down in the 1962 Convention, is to provide state-of-the-art research facilities to astronomers and astrophysicists, allowing them to conduct front-line science in the best conditions. The annual Member State contributions to ESO are approximately 198 million euros and ESO employs around 700 staff members. By building and operating a suite of the world's most powerful ground-based astronomical telescopes enabling important scientific discoveries, ESO offers numerous possibilities for technology spin-off and transfer, together with high technology contract opportunities and is a dramatic showcase for European industry.

The ESO Headquarters (comprising the scientific, technical and administrative centre of the organisation) are located in Garching near Munich, Germany. In Chile, ESO operates the Vitacura centre as well as three unique observing sites: La Silla, Paranal and Chajnantor.

ESO is building the 39-metre Extremely Large Telescope, the ELT, which will become “the world’s biggest eye on the sky”.

International Day for the Preservation of the Ozone Layer