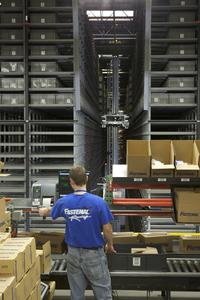 (PresseBox) ( Wels, 05.11.10 )
A new mini-load system from TGW Systems led the transformation of Fastenal's Indianapolis distribution center. With 126,000 tote locations, the system delivers totes to workstations where operators fill orders for 275 stores in the Great Lakes region and replenish stock at 13 regional distribution centers around the US.

"Growth through customer service" has been the motto at Fastenal, one of the nation's largest distributors of industrial fasteners, since the company was founded in 1967. From the start, Fastenal distinguished itself by staying close to its customer with an ever-growing network of industrial supply stores that provide local service and immediate product availability.

Today, the company has 2,357 store locations across 18 regions of the US. But Fastenal's growth isn't defined just by adding new store fronts. Over the last few years, Fastenal has also expanded the number of products it sells by a factor of five.

To accommodate that growth, the Winona, Minnesota-based distributor implemented automated materials handling technologies to turn its 530,000 square foot (49,200 m²) Great Lakes Distribution Center in Indianapolis from a regional DC serving 275 stores into a master DC that stocks 163,000 stock keeping units (SKUs) and replenishes the company's 13 other distribution centers around the country.

At the heart of the system is a goods-to-the-person picking system powered by a mini-load automated storage and retrieval system (AS/RS) from TGW with 126,000 storage locations and 12 fast, double-handling cranes. The mini-load delivers totes to workstations where operators do order selecting in an ergonomic and efficient environment.

The benefits: By using the mini-load to store and retrieve totes, Fastenal has reduced the number of times it touches a product in the distribution center from as many as 12 to as few as two. In addition, delivering totes to order selectors at an ergonomic height has cut down on the amount of travel time in the DC, reduced injuries and improved morale. Employee turnover is on the decline.

Combined with other materials handling technologies, including a 13-crane unit load AS/RS with 52,000 pallet locations, the new system is processing an estimated 16,000 packages per day while picking from as many as 100,000 unique SKUs each month. Best of all, there is room to grow as the company continues to grow. "High density storage is huge for us," says Walter Tate, Fastenal's manager of distribution development.

Better yet, the mini-load has "improved inventory accuracy and eliminated errors," says Tate. "Every time you touch a product, there's an opportunity for a mistakes. By eliminating those touches, we've reduced the opportunity for error."

A new strategy, a new DC

Fastenal's business model is designed to distinguish itself from the competition by utilizing a network of industrial supply stores that provide local service and immediate product availability over a catalog of parts.

The network is supported by 14 distribution centers that average 125,000 square feet (11,600 m²) and typically carry the 20,000 or so SKUs that are most commonly ordered by customers of the stores served by that DC. Over time, Fastenal has developed three distribution center models. One is for smaller, manual distribution centers. As a business unit grows over a five- or ten-year period, the company moves that business into a bigger facility. Eventually, Fastenal adds automation as economies of scale dictate. That typically occurs once a facility is processing 200,000 to 250,000 requests a month.

Three years ago, Fastenal began to investigate ways to grow the business at its existing stores. Back then, the company was purchasing or manufacturing about 32,000 SKUs. The next step was to expand the number of SKUs by adding products that would complement the products it was already selling: instead of just selling nuts and bolts, the company added new items like cutting tools to bore a hole for the belt, ratchets to set a bolt and wrenches to tighten them. "The emphasis is to have the product ready when our customers need it," says Tate.

One of the first steps was to add a purchasing group in Indianapolis to expand the inventory. In addition, the company allowed store managers to purchase any piece of inventory they might need to service a customer or to create a new part number to buy something the company has never purchased before. Within three years, Fastenal was offering 160,000 SKUs, or 5 times the number of products it had previously offered. Those additional SKUs began to generate new sales.

Since it was impractical for each DC to stock all the products the company was carrying, Fastenal's CEO, Will Oberton and his colleagues designed a new distribution strategy utilizing a master DC that can stock all of the parts and then replenish parts as needed at the regional DC's. The Great Lakes Distribution Center was chosen as the master DC because of it's location and at 460,000 sq ft (42,700 m²), it was the largest facility in the network. While the Indianapolis DC would continue to support the 275 stores in the Great Lakes region, it would also receive and store product in bulk and then break those pallets down if necessary to replenish other DCs - or ship directly to a store - with product not typically stocked in those regions. "By utilizing our fleet of semis and by utilizing UPS and FedEx for smaller shipments, we can hit most of the United States in one day from Indianapolis," explains Terry Hanley, a regional distribution manager.

Handling those additional SKUs also required a makeover of the Indianapolis facility. Until that time, Indianapolis was a traditional semi-automated warehouse, using narrow-aisle pallet rack, lift trucks, some conveyor and sortation equipment and RF-directed picking driven by an internally developed WMS. The new design incorporated automation to maximize storage, direct fast, accurate and efficient picking and accommodate the growth strategy. "We started with automated storage because we were going to run out of room," says Tate. "We added the mini-load AS/RS to increase throughput and decrease touches."

Mini-load technology was also the best solution for handling medium to medium-fast moving SKUs in a facility that offers same-day order processing. "We didn't have the room to add the number of people we needed to keep up with demand in a traditional picking environment," says Tate. "We now have the capacity we need and the system operates at a speed that allows us to control our work flow."

With as much as a 50 percent share of the European market for mini-load technology, TGW was an ideal partner for this installation. "We have already designed and implemented systems for this type of operating environment," says Rostan Eaton, TGW's project manager and team leader. "We were not reinventing the wheel with this project."

In addition, the Fastenal system utilized TGW's Mustang crane, a double-deep handling base designed to move a 200-pound (90 kg) load capacity with some of the fastest speeds in the industry. "Since Fastenal wanted to handle two totes at a time weighing approximately 75 pounds (34 kg) each, that was our sweet spot," says Eaton.

The cranes also feature a proprietary two-piece brazed mast; plus, they are modular in design, adjustable for height and use parts in common with other TGW products. "With a modular product, we can easily add cranes as Fastenal's business expands," says Eaton. "And by using common parts, they can expand their system without expanding the number of spare parts that have to be stored."

Adds Tate: "When we looked at the market, TGW had the best throughput rate for double deep storage, and the speed of their cranes allowed us to use fewer cranes to get the same amount of work done. They clearly were a strategic partner in this project."

Mixed pallets with more than one stock keeping unit (SKU) are scanned at the receiving area and delivered to a workstation for processing. There, operators scan the cartons into a storage tote. Once the tote is full, it's conveyed to the mini-load AS/RS, where the warehouse control system (WCS) chooses a putaway location and updates the WMS. That inventory is now available to promise to branches nationwide.

Meanwhile, Fastenal's branch locations report sales in real time to the corporate inventory system. That information is used by the WMS to create replenishment orders in both branch locations in the Great Lakes region as well as regional DCs. The system may also process cartons for parcel delivery to branch locations that need a small quantity of an item not stocked in a regional DC.

Once the orders are dropped into the WMS, the mini-load AS/RS retrieves totes from storage based on the departure times of the trucks. The totes are conveyed and sorted to an operator at a workstation. The operator scans the tote to verify the product. A screen displays the part number, a quality control number and the quantity to be picked. Once all the items for an order have been picked, the tote is returned to a storage location in the mini-load. The shipping container is closed, placed on the conveyor system and sorted to the pallet build area.

In the shipping area, cartons are either loaded directly into a truck for parcel shipment, or scanned and palletized onto a mixed SKU composite pallet and queued for a later delivery. Full pallets are similarly queued for delivery. Trucks typically depart the facility between 10 PM and midnight so they can arrive at a branch location before it opens the next morning.

By delivering the totes to order selectors who previously walked to picking locations, Fastenal eliminated a significant amount of walking time in the warehouse. In addition, the combination of automated bulk storage and the mini-load has eliminated a significant number of touches to the product, which is not only more efficient, it's more accurate. "We touch the product when it arrives at the receiving dock and when we pick it to ship it out the door," says Tate. In between, all of the handling is executed by automation.

The system also eliminated a secondary sort for many orders. "The mini-load can deliver a part to a picker based on where it's going, which allows us to get more product to more areas of the country quicker," says Tate.

An unexpected benefit of the goods-to-the-person picking has been a safer work environment for Fastenal's employees and better morale. "We're now delivering 75 lbs (34 kg) totes to the operator at waist level instead of them picking it from a shelf," says Tate. "Our reportable incidences have been cut in half, and we've seen both a decrease in turnover as well as an increase in the number of people willing to go to work in the warehouse on the first offer."

That latter is especially important to Fastenal's recruitment strategy: Traditionally, the company has hired part-time college students who may transition into Fastenal's sales force or management after graduation. "It's a great way for us to recruit bright young people who have good ideas they can bring to the company," says Hanley. "With the automated system, this is a much more appealing environment for them."

Planning for the future

The initial automation project in Indianapolis is complete. But Fastenal has plans to continue to add automation in the future. For instance, the company has implemented a scaled-down version of the mini-load, with 42,000 tote locations, in Dallas, a fast-growing DC that is servicing two regions. "We were sending out 200,000 or more packages a day and had outgrown the facility," says Tate. "The dense storage units will allow us to grow our business without moving from that facility." The company also has plans to create a second master DC in Modesto, California to receiving shipments from Asia and distribute to regional DCs in the west.

After nearly a year of operation with the new system, the benefits are becoming clear. "At the end of the day, the choice of mini-load cranes delivered the best return on investment for this application," says Tate. "That's the name of the game."

The TGW Logistics Group is an integrated solution network. Since 1969 the company has been implementing different internal logistics solutions, from small material handling applications to complex logistics centres.