The Impact of the Economic Meltdown on IT Spending 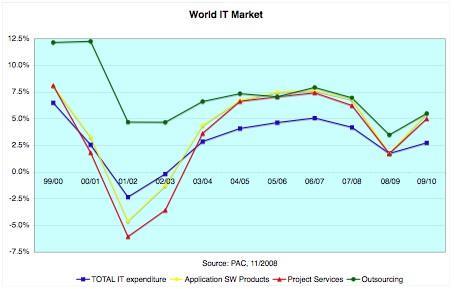 (PresseBox) ( Munich, 20.11.08 )
The IT sector is entering into its second major downturn in the space of eight years. Pierre Audoin Consultants (PAC) believes that while there are some valuable lessons to learn from the previous market decline that followed the dotcom boom-and-bust, suppliers also face a different set of challenges in 2009.

The Software & IT Services market is entering a period of uncertainty following four years of sustained growth. This is being driven by the economic slowdown, a financial crisis that may not yet have reached its peak, and volatility in prices for energy and raw materials. But what lessons can the sector learn from the previous downturn at the start of the decade?

PAC believes that suppliers can draw valuable experience from how market conditions changed back in 2001, but they must also be aware that this time around, the context is very different. 2001 was an IT crisis, with the implosion of the e-business bubble forcing many organizations to reassess whether IT really mattered to the success of their business. But the current situation seems closer to that of 1992-1993, which was an economic rather than an IT crisis. And at that time, the IT markets recovered quite quickly.

What else changed between 1992, 2001 and 2008? Looking back at 1992, only a few processes were really strongly supported by IT. Two trends started in the nineties: better support for all processes and their integration, resulting in new concepts such as ERP and later SCM, CRM, PLM or e-Business. While not all projects in these areas met expectations, these topics have become acknowledged as strategic for improving the performance of any company. No business can exist today without a reliable IT operation, and future performance improvements will heavily rely on IT. So as we move into 2009, IT clearly matters!

The main challenges for IT users will not dramatically change with the crisis. Cost reduction and efficiency increase, globalization, the need for more flexibility and agility and mergers and acquisitions are all challenges requiring IT support. Another lesson learned in the post-e-business-crisis phase is that cost saving and process efficiency alone are not a panacea for performance improvement. To succeed, a company must innovate. Here again, IT has a key role in the product development process.

So what does change with the crisis? First of all, companies changed from an "Attack" to "Defend" strategy. This means optimizing existing products portfolio and processes, focusing on customer retention and optimizing the deployment of the existing workforce. The crisis means reduced investment capacities and focus on a short term ROI. So overall, this will result in a slowdown of IT investments, although nothing comparable with what we experienced in 2001.

Most projects have already been reviewed or will be reviewed in the coming months, resulting in some postponements, cancellations and delays. The fastest reaction has come from small companies, while large businesses traditionally take advantage of a crisis to optimize their efficiency. Topics like collaboration and workflow, risk and performance management and flexibility have become priorities.

So growth will be affected - and in some cases result in a decline. This will put reinforced pressure on prices, in particular by very large accounts. Nevertheless, we don't expect a dramatic price collapse: the timid recovery of onshore daily rates was lower than the salary increases in the last four years, and IT users know this well. Most users understand that offshoring requires a time- and cost-intensive learning curve so the pace of offshoring won't accelerate substantially.

The banking industry, and in particular investment banks, will be the most affected. But even there, numerous projects will be completed and new ones begun, due to the strategic role played by IT in most banking operations. There is a lot of efficiency potential linked with process optimization, process consolidation and process integration. And topics like risk management, compliance or multi-channel integration will even experience growing investment.

Overall, the software product business will suffer more than the services business, though maintenance fees will generate stable revenues. Project services will be strongly impacted too. Overall, the outsourcing business will see more new deals, however the pressure on existing deals, especially in mature countries and industries, will result in a slight slowdown of growth.

In terms of countries, medium-sized Western European economies like Austria, Belgium, Denmark, Finland, Italy, the Netherlands, Norway and Switzerland are expected to be among the least affected. France and Germany will be in the average, while the US and the UK will be severely hit. These two countries combine several negative factors: very liberal and more reactive economies, strong investment banking industry, importance of the housing crisis and very mature IT services market. Emerging countries like China, India or Russia will be impacted too, however they will remain in two-digit growth rates.

Overall, the market situation will be much tougher than in the last four years, however there will be a lot of interesting segments to address, selected topics or services in selected industries, even in the most mature countries.

PAC will publish revised, generic market figures (by products and services matched by industries) for all major countries in the coming weeks; the first ones are already online.

PAC is a global market research and strategic consulting firm for the Software and IT Services Industry (SITSI). PAC helps IT vendors, CIOs, consultancies and investment firms by delivering analysis and advice to address a range of growth, technology, financial and operational issues.

Our 30+-year heritage in Europe - combined with our US presence and worldwide resources - forms the foundation of our ability to deliver in-depth knowledge of local IT markets, anywhere. We employ structured methodologies - undertaking thousands of annual face-to-face interviews on both the buy and sell side of the market, as well as a bottom-up, top-down approach - to leverage our research effectively.

PAC publishes a wide range of off-the-shelf and customized market reports -including our best-selling SITSI® program - in addition to our suite of strategic consulting and market planning services. Over 160 professionals in 16 offices -across all continents - are delivering the insight that can make a difference to your business.

Pressemitteilung The Impact of the Economic Meltdown on IT Spending weiterempfehlen