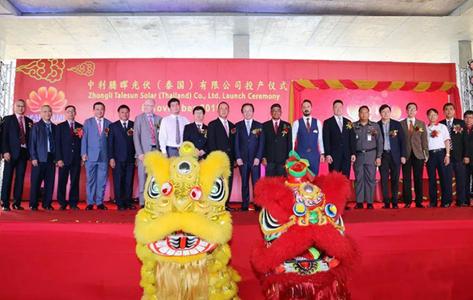 (PresseBox) ( Munich, 02.12.15 )
Zhongli Talesun Solar, a leading international manufacturer of high quality solar modules and cells, has opened a new production line in Thailand. The manufacturing plant, located in the coastal province of Rayong, has a capacity of 500 Megawatt each for PV cells and modules. The new facility, the construction of which began in February this year, will exclusively meet demand in overseas markets.

The opening of this new production facility in South East Asia sees Talesun increase its total production capacity to two gigawatts for photovoltaic cells, and three gigawatts for modules. The company will produce all its major module types at the Thai facility. The corresponding cell production is taking place entirely on site and European deliveries will begin in the first six months of 2016. The company is currently concluding all of the important certification processes both within the country and on the international level. These will ensure, from the outset, that the factory produces products that meet all of the established standards of the solar sector. The efficiency levels of the cells and modules produced in Rayong are 20.3%, and 17.55% respectively.

Zhongli Talesun Solar – recently confirmed by Bloomberg as a Tier 1 manufacturer – has invested some two billion Renminbi Yuan in the construction of the production facility - a figure that equates to approximately 292 million Euros. "The commencement of production in Thailand represents another important step in our plan to invest around 15 billion Renminbi Yuan at the site by 2018," explains Eva Belletti, Managing Director at Talesun Solar Germany GmbH. "Our new state of the art facility maintains our commitment to an automation strategy. This ensures that the high quality of our cells and modules remains constant, irrespective of where they are produced. "

The city of Rayong is situated in the East of Thailand, in the province that shares its name. Administratively, the area is affiliated to the central region of the country. The Kingdom of Thailand's capital city Bangkok is some 200 kilometers away. Alongside commerce, Rayong boasts a strong agricultural sector. The international airport U-Tapao lies approximately 40 kilometers to the west of the city. In addition, a 220 kilometers high-speed railway line is currently being planned, which will link the cities of Bangkok and Rayong, with a journey time of just 60 minutes.

Talesun is an internationally operating premium producer of solar modules and cells for the private and industrial sectors. The company's 210,000m², fully automated production plant in the Chinese province of Jiangsu reaches a production capacity of 2 GW. Talesun has subsidiaries in Hong Kong, Singapore, Munich and San Jose. More information under: www.talesun-eu.com and www.talesunenergy.com.