(PresseBox) ( Hamburg, 11.06.12 )
Effect of the WEEE recast on PV manufacturers and importers

When the amended directive of the European Parliament and of the council on waste electrical and electronic equipment (WEEE directive) is also becoming binding for all manufacturers and importers of solar and PV modules, the producers will require support in implementing such requirements. The WEEE directive regulates in summary the professional recycling of waste electrical and electronic devices and its financing by the manufacturers – and in the future also in the case of photovoltaic and solar modules. After the implementation of the "WEEE2" in the countries of the European Union, the requirements and obligations already apply before the sales of solar and PV modules and not only when recycling them after lots of years of operation.


Bureaucracy and cost expenditures are underestimated

Lots of manufacturers of photovoltaic and solar modules apparently did not yet realize these aspects. Since too often the discussion on the WEEE directive is only conducted with regard to recycling.

Significant and much more important are the obligations and their effects that occur already short-term which retreat in the background. In particular in Germany manufacturers and importers have to prove an insolvency-proof guaranty for the notified sales quantity after a time-consuming registration process and moreover handle a complex monthly and annual reporting obligation. Of course, it is also necessary to provide an area-covering disposal network in order to be able to handle possible recycling requirements in compliance with the law in a timely and qualitative manner. The accomplishment of these obligations is the basis for the sales in Germany which is generally forbidden without the release of the registration and the issuing of an individual WEEE number by the responsible authority.


Fines and prohibitions on sale as a result of illegal sales


Recycling can be handled via established systems

In Europe, the recycling and take-back of PV and solar modules can be handled via the established logistics and recycling systems. Due to the integration in the ElektroG (Electrical and Electronic Equipment Act) (for instance in Germany) the manufacturers even have the opportunity to handle their obligations in a cost-efficient way. However, if possible, it is necessary to make sure that the used modules are not damaged when they are taken back. To do so, it is recommended to check if it would be possible to install a proper collection group for PV modules at the transfer points. The gathering and transportation can, for instance, be performed on stake pallets.

The consideration shows that it is not sufficient to consider the WEEE directive only from the end-of-life view (EOL) since it is already becoming binding at the beginning of the lifecycle of PV modules and the recycling can anyway be handled by already established logistics and disposal structures.

Furthermore, among others, the self-organization of the manufacturers for the take-back of EOL photovoltaic modules did not protect against the integration of the industry in the WEEE directive since the majority of EOL PV modules will only accrue in a few years and therefore it was not possible to generate sufficient collection rates. The pure focus on the EOL recycling leads the PV manufacturers into a cul-de-sac against the background of the upcoming WEEE directive.

At this, the integration of the WEEE directive makes sense: The processes and structures have successfully established since more than seven years. Furthermore, the WEEE rules the EOL recycling simply by a free of charge acceptance of used modules in more than 1'500 public recycling centres only in Germany.

The industry-comprehensive system solutions for the complete handling of the WEEE directive have long been available on the market. The established providers have already implemented the learning curve effects in handling the WEEE directive after many years of experience which yet can be felt in their cost structures, their quality and their process reliability and thus to the benefit of the PV manufacturers. Against this background it will be difficult for industry specific take-back systems to enter this market.

Finally, it is relevant in the implementation of the WEEE directive to reduce the administrative burdens and to realize a quick registration and the manufacturers need to participate in a guaranty and recycling system according to performance as a basis of the legal and cost optimized sales. To do so, no industry specific take-back system of the manufacturers is required.

With its two approved manufacturer's guaranty systems take-e-way is the full service provider and one of the most important suppliers on the German market with a share of 36 percent of all manufacturers registered in the field B2C according to the Electrical and Electronic Equipment Act (ElektroG). Furthermore, take-e-way has experience from several thousands of successfully performed registration processes for companies in 31 countries all over the world. take-e-way processes provision and disposal orders on behalf of its more than 2'500 connected customers every day. To do so, take-e-way maintains a nationwide network of certified treatment plants which do not shy efficient handling of worn out PV modules.


take-e-way at the Intersolar Europe 2012 in Munich/Germany

The team of take-e-way is at the disposal of all interested companies and organisations under the phone number +49/ 40 / 21 90 10 - 65 and will be glad to advise all manufacturers, distributors and importers of solar and PV modules regarding future obligations according to the Electrical and Electronic Equipment Act (ElektroG) at the Intersolar Europe 2012, Germany's most important trade fair for solar technique at booth A5.335 from June 13th to 15th, 2012. 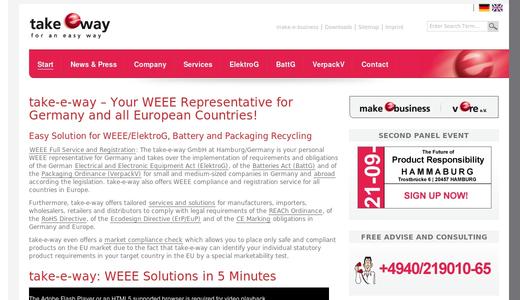 Business Fields: take-e-way GmbH at Hamburg/Germany assumes the implementation of requirements and obligations in conformity with the law according to the Electrical and Electronic Equipment Act (ElektroG/WEEE), Battery Act (BattG) and Packaging Ordinance (VerpackV) for medium-sized companies in Germany and abroad.

VERE Association: take-e-way represents the interests of more than 2'500 small and medium-sized companies even at political level in cooperation with the Verband zur Rücknahme und Verwertung von Elektro- und Elektronikaltgeräten (VERE e.V.) (= Association for the Return and Recycling of electric and electronic Devices) founded in 2003, the organization of suppliers, manufacturers, trade associations and individual persons for implementation of the ElektroG in Germany having the largest number of members.