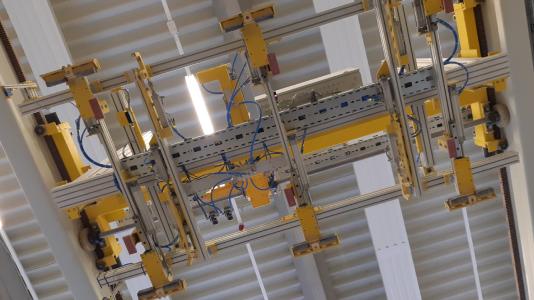 (PresseBox) ( Herford, 24.02.21 )
Herford (Germany), where SYSTRAPLAN GmbH & Co. KG has been developing and building individual material flow and storage technology for over 40 years. The proven systems and solutions from Herford are mostly used for handling in production, storage and order picking of flat materials, such as lightweight panels.

Press feeding with the aid of belt trays and the associated discharge devices have been part of SYSTRAPLAN’s product range since it was founded.

In 2000, SYSTRAPLAN received an enquiry from a lightweight panel manufacturer for the first time, which led directly to the first joint project. The requirements were successively specified and expanded, so that the relationship between the two companies, but also the scope of the handling solution for the special machine manufacturer SYSTRAPLAN, gradually expanded.

In the last joint major project, which was created in the course of a production expansion, a wide variety of material flow technology was again supplied.

This consisted of two line gantries for handling the mould lids, a press loading and unloading system via lifting trays, a drum turner, an edge cleaning system, two stacking gantries for the finished lightweight panels and a number of conveyor systems. The insertion of the fabric mats into the moulds was also automated by means of an individual solution.

"The system as it has now been running for some time is unique, customised and reliable. But we can also still rely on the older system from SYSTRAPLAN that was delivered before," reports the head of maintenance.

There are always attempts to jointly develop the machinery further in order to achieve optimum efficiency for production and to make the work of the employees easier. The two companies are currently in talks to find improvements for the loading

and unloading of moulds and mould covers. The optimisation of a destacking portal could also become relevant in the future in order to be able to accommodate further formats in the panel segment if necessary.

"This is exactly what is important in special machine construction," SYSTRAPLAN emphasises. Because only through good cooperation between customer and supplier can such individual and complex solutions be optimally developed and subsequently implemented. This also applies to subsequent optimisations.

"For us, there is no such thing as an off-the-shelf machine, so we are also dependent on the help of our customers," they continue. This important cooperation between the customer and SYSTRAPLAN seems to have been working for a long time, 20 years to be exact, and both sides hope that it will continue to do so in the future.

Since 1974 the know-how of more than 60 qualified SYSTRAPLAN employees has stood for intelligent, economical production logistics around the world. The latest concepts for the timber trade and furniture industry, building materials, plastics processing and metal working industries as well as for the granite and rubber processing industries (tire sector), are guarantee for optimum material flow control and storage technology.

This holds true for individual solutions as well as for entirely linked production systems. From the task, the concept through to the completed machine, our experienced employees develop excellent solutions together with the customer for maximum cost effectiveness and efficiency throughout the entire production process. Whether transporting, moving, stacking, storing or feeding - the latest SYSTRAPLAN materials handling equipment ensures that our customers receive dependable products made with state-of-the-art technology for profitability, performance and application possibilities.

For an engineering company like SYSTRAPLAN it is necessary to work intensively on the continued development of their products. At the same time, this not only uncovers potential for rationalization, but also, and more importantly, boosts the quality of products and processes. With this gained knowledge we are able to develop unique selling features, which represent a clear technical and economical advantage for our customers.