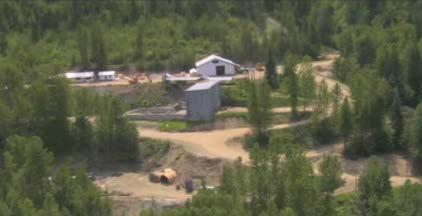 (PresseBox) ( Vancouver, B.C., 20.06.19 )
Ximen Mining Corp. (TSX.V: XIM) (FRA: 1XMA) (OTCQB:XXMMF) (the “Company” or “Ximen” - http://www.commodity-tv.net/c/mid,2697,Company_Presentation/?v=298917) has entered into an agreement for a draw-down equity financing facility (the “Investment Agreement”) with Alumina Partners (Ontario) Ltd. (“Alumina”), an affiliate of New York-based private equity firm Alumina Partners, LLC.  The Investment Agreement will provide the Company with up to C$8.0 million over a 24-month period to finance its exploration and on-going acquisition of gold assets in British Columbia.

Christopher Anderson, President and CEO of Ximen, stated, "This Agreement provides Ximen with additional capital to expand our exploration program on our Brett Epithermal Gold property near Vernon BC and allows us to accelerate our work programs planned for the Kenville Gold Mine near Nelson,  BC."

“Alumina is excited to support Ximen as they move to systematically expand their precious metals holdings in the highly favorable mining jurisdiction of British Columbia,” said Adi Nahmani, Managing Member of Alumina. “As the gradual sector rotation back toward precious metals continues to gain traction, we anticipate the strong management team at Ximen being able to translate their substantial asset base into the real revenue streams of a production-stage company.”

The Investment Agreement is structured to provide Ximen with relatively quick access to private placement financing as and when required. Under the Investment Agreement, the Company has the right to draw down on the facility, at its sole discretion, through equity private placement tranches of up to C$500,000 each. Each tranche will be a placement of units (each a “Unit”), with each Unit comprising one Ximen common share (a “Share”) and one common share purchase warrant (a “Warrant”).  The Units will be priced at a discount of 15% to 25% from the then most recent closing price of the Shares on the TSX Venture Exchange at the time of the applicable Company draw-down notice to Alumina. The Warrants will be issued at a 25% premium over the market price of the Shares and will have a term of three years. There are no standby charges or other upfront fees associated with the Investment Agreement.  Each tranche of Units issued under the Investment Agreement will be subject to the acceptance of the TSX Venture Exchange, and the securities issued will be subject to the customary 4-month hold period.

On behalf of the Board of Directors,

Ximen Mining Corp. owns 100 percent interest in all three of its precious metal projects located in southern BC.  Ximen`s two Gold projects are The Gold Drop Project and The Brett Epithermal Gold Project. Ximen also owns the Treasure Mountain Silver Project adjacent to the past-producing Huldra Silver Mine.  Currently both the Gold Drop Project and the Treasure Mountain Silver Project are under option agreements. The option partners are making annual staged cash and stocks payments as well as funding the development of these projects. The company has recently acquired the Kenville Gold mine near Nelson, British Columbia and The Amelia Gold Mine.

This press release contains certain "forward-looking statements" within the meaning of Canadian securities legislation, including statements regarding the financing available to the Company under its Investment Agreement with Alumina, and the Company’s related plans for exploration and on-going acquisition of gold assets in British Columbia. Although the Company believes that such statements are reasonable, it can give no assurance that such expectations will prove to be correct. Forward-looking statements are statements that are not historical facts; they are generally, but not always, identified by the words "expects," "plans," "anticipates," "believes," "intends," "estimates," "projects," "aims," "potential," "goal," "objective," "prospective," and similar expressions, or that events or conditions "will," "would," "may," "can," "could" or "should" occur, or are those statements, which, by their nature, refer to future events. The Company cautions that Forward-looking statements are based on the beliefs, estimates and opinions of the Company's management on the date the statements are made and they involve a number of risks and uncertainties. Consequently, there can be no assurances that such statements will prove to be accurate and actual results and future events could differ materially from those anticipated in such statements. Except to the extent required by applicable securities laws and the policies of the TSX Venture Exchange, the Company undertakes no obligation to update these forward-looking statements if management's beliefs, estimates or opinions, or other factors, should change. Factors that could cause future results to differ materially from those anticipated in these forward-looking statements include the risk that the Company will not be in compliance with the draw-down conditions under the Investment Agreement at a time when it wishes to rely upon financing under that agreement, the risk that the Company will not be able to secure the acceptance of the TSX Venture Exchange for any draw-down under the Investment Agreement, the risks associated with mineral exploration, development and extraction operations, the risk that its business partners will encounter unanticipated geological factors, or the possibility that they may not be able to secure permitting and other governmental clearances, necessary to carry out their stated plans, and the risk of political uncertainties and regulatory or legal disputes or changes in the jurisdictions where the Company carries on its business that might interfere with the Company's business and prospects. The reader is urged to refer to the Company's reports, publicly available through the Canadian Securities Administrators' System for Electronic Document Analysis and Retrieval (SEDAR) at www.sedar.com for a more complete discussion of such risk factors and their potential effect.