In the budget, the Administration noted that: “Establishing a Uranium Reserve provides assurance of availability of uranium in the event of a market disruption and supports strategic U.S. fuel cycle capabilities. This action addresses immediate challenges to the production of domestic uranium and reflects the Administration's Nuclear Fuel Working Group (NFWG) priorities. The NFWG will continue to evaluate issues related to uranium supply chain and fuel supply.”

In commenting on the Uranium Reserve proposal, US Secretary of Energy Dan Brouillette indicated: “This is the very beginning of a long process to revitalize in many respects the entirety of the nuclear fuel cycle. What you've seen in the President's budget is a request for $150 million to begin the process of purchasing uranium. But it won't stop there."

Former Secretary of Energy and UEC Chairman, Spencer Abraham, stated: “We appreciate the Trump Administration’s recognition of the national security risk from U.S. over reliance on imported uranium for 99% of uranium supplied to the commercial nuclear reactor fleet. The establishment of a Uranium Reserve will allow domestic uranium companies to restart some operations and begin to rebuild domestic uranium mining capability. We hope Congress will support the Administration’s proposal and funding request.  The sooner action is taken the sooner we can put people back to work in the uranium mining sector and begin reducing our overdependence on uranium imports from countries that are not always aligned with U.S. interests.”

President and CEO, Amir Adnani, added: “The Administration should be applauded for taking steps to revive and expand domestic nuclear fuel production as outlined in President Trump’s July 12, 2019 memo establishing the NFWG. We are pleased President Trump has taken the first step to act on the recommendations of the NFWG by initiating a program to purchase U.S. mined uranium for America’s strategic Uranium Reserve. This is great news for the domestic uranium mining industry, and we look forward to working with the NFWG to help fulfil the program’s objectives.”

Since inception in 2005, UEC’s main strategic focus has been on acquiring and developing U.S. in-situ recovery (ISR) projects that are an environmentally friendly and a lower cost alternative to conventional mining. The Company has a near term extraction profile of 4 million pounds of U3O8 per year from our South Texas and Wyoming ISR projects.  The Company’s South Texas hub-and-spoke strategy contains the fully licensed and operational Hobson Processing plant with a capacity of 2 million pounds a year, and license amendments pending, to increase that capacity.  Our South Texas Palangana mine has proven production capabilities and received renewal permits in 2019, authorizing extraction for an additional ten years.

UEC has made the only new discovery of a uranium resource* in the U.S. over the last decade at Burke Hollow in South Texas, and has been aggressively advancing the project towards extraction over the last two years. Burke Hollow has received all its major permits, has an expanded Production Area 1 after this past year’s drilling campaign and can be a timely source of supply for the national Uranium Reserve.

The Company’s Reno Creek ISR project in Wyoming is the largest, licensed, pre-production project in the U.S. with a Measured and Indicated Resource of 32 million tons grading 0.041% U3O8 containing 26 million pounds of uranium and Inferred Resources of 1.92 million tons grading 0.039% U3O8 containing 1.49 million pounds*.  Reno Creek is licensed to produce 2 million pounds of U3O8 per year and received a modified Permit to Construct in 2019, allowing the Company to move forward with construction of ISR wellfields that could also contribute to the U.S. Uranium Reserve Program.

Uranium Energy Corp is a U.S.-based uranium mining and exploration company.  In South Texas, the Company’s hub-and-spoke operations are anchored by the fully-licensed Hobson Processing Facility which is central to the Palangana, Burke Hollow and Goliad ISR projects.  In Wyoming, UEC controls the Reno Creek project, which is the largest permitted, pre-construction ISR uranium project in the U.S.  Additionally, the Company controls a pipeline of uranium projects in Arizona, New Mexico and Paraguay, a uranium/vanadium project in Colorado and one of the highest-grade and largest undeveloped Ferro-Titanium deposits in the world, located in Paraguay.  The Company’s operations are managed by professionals with a recognized profile for excellence in their industry, a profile based on many decades of hands-on experience in the key facets of uranium exploration, development and mining.

Except for the statements of historical fact contained herein, the information presented in this news release and oral statements made from time to time by representatives of the Company are or may constitute “forward-looking statements” as such term is used in applicable United States and Canadian laws and including, without limitation, within the meaning of the Private Securities Litigation Reform Act of 1995, for which the Company claims the protection of the safe harbor for forward-looking statements.  These statements relate to analyses and other information that are based on forecasts of future results, estimates of amounts not yet determinable and assumptions of management.  Any other statements that express or involve discussions with respect to predictions, expectations, beliefs, plans, projections, objectives, assumptions or future events or performance (often, but not always, using words or phrases such as “expects” or “does not expect”, “is expected”, “anticipates” or “does not anticipate”, “plans, “estimates” or “intends”, or stating that certain actions, events or results “may”, “could”, “would”, “might” or “will” be taken, occur or be achieved) are not statements of historical fact and should be viewed as forward-looking statements.  Such forward looking statements involve known and unknown risks, uncertainties and other factors which may cause the actual results, performance or achievements of the Company to be materially different from any future results, performance or achievements expressed or implied by such forward-looking statements.  Such risks and other factors include, among others, the actual results of exploration activities, variations in the underlying assumptions associated with the estimation or realization of mineral resources, the availability of capital to fund programs and the resulting dilution caused by the raising of capital through the sale of shares, accidents, labor disputes and other risks of the mining industry including, without limitation, those associated with the environment, delays in obtaining governmental approvals, permits or financing or in the completion of development or construction activities, title disputes or claims limitations on insurance coverage.  Although the Company has attempted to identify important factors that could cause actual actions, events or results to differ materially from those described in forward-looking statements, there may be other factors that cause actions, events or results not to be as anticipated, estimated or intended.  There can be no assurance that such statements will prove to be accurate as actual results and future events could differ materially from those anticipated in such statements.  Although the Company believes that the expectations reflected in such forward-looking statements are based upon reasonable assumptions, it can give no assurance that its expectations will be achieved.  Forward-looking information is subject to certain risks, trends and uncertainties that could cause actual results to differ materially from those projected.  Many of these factors are beyond the Company’s ability to control or predict.  Important factors that may cause actual results to differ materially and that could impact the Company and the statements contained in this news release can be found in the Company’s filings with the Securities and Exchange Commission.  The Company assumes no obligation to update or supplement any forward-looking statements whether as a result of new information, future events or otherwise.  Accordingly, readers should not place undue reliance on forward-looking statements contained in this news release and in any document referred to in this news release.  This news release shall not constitute an offer to sell or the solicitation of an offer to buy securities. 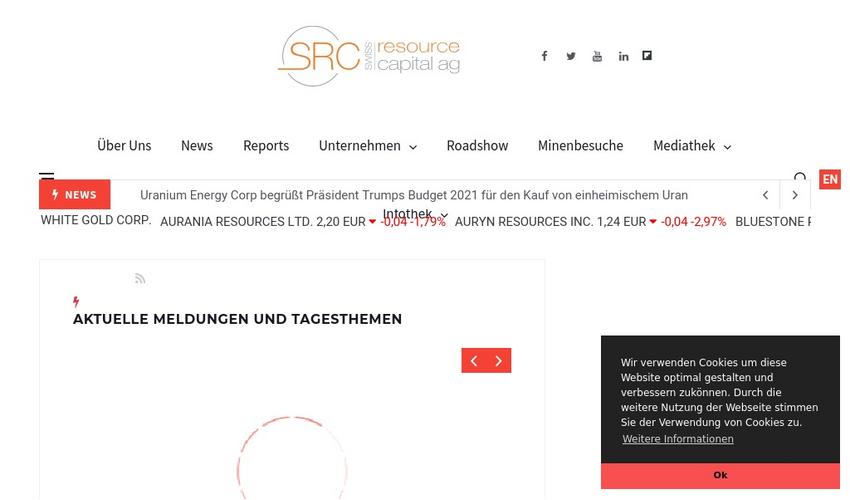