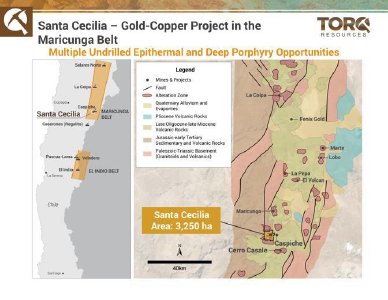 (PresseBox) ( Vancouver, Canada, 22.10.21 )
Torq Resources Inc. (TSX-V: TORQ, OTCQX: TRBMF) (“Torq” or the “Company” - https://www.commodity-tv.com/ondemand/companies/profil/torq-resources-inc/) is pleased to announce that it has acquired an option to earn a 100% interest in the 3,250-hectare (32.5 square kilometre (km)) Santa Cecilia gold-copper project, located approximately 100 km east of the city of Copiapo in northern Chile. The project is in the southern region of the world-class Maricunga belt and immediately north of the El Indio belt (Figure 1). It is estimated that the Maricunga belt could host up to 90 million ounces of gold endowment. The belt is characterized by gold epithermal and gold – copper porphyry deposits that are Oligocene - Miocene in age, including world-class multi-million-ounce deposits such as Salares Norte, La Coipa, Cerro Maricunga, Marte, Lobo, La Pepa, El Volcan, Caspiche and Cerro Casale (Figure 1).

The Santa Cecilia project is located immediately adjacent to the Norte Abierto project, held by Newmont and Barrick, which is comprised of the Caspiche and Cerro Casale gold – copper porphyry deposits (Figure 2). Collectively, these deposits contain proven and probable reserves of 23.2 million (M) ounces of gold and 5.8 billion (B) pounds of copper and measured and indicated resources of 26.6 M ounces of gold and 6.7 B pounds of copper[ii]. Limited historical exploration work at Santa Cecilia was performed by the previous operator, a major international mining company (“previous operator”), in 1988 – 1990, when it drilled 47 holes, totaling approximately 14,000 metres (m), and completed 1,200 m of exploration tunnel development that clearly defined epithermal gold and gold – silver mineralization as well as gold – copper porphyry mineralization at surface and shallow depths, respectively. A subsequent operator of Santa Cecilia then drilled two deeper holes in 2012 that successfully encountered gold – copper – molybdenum porphyry mineralization underlying the shallow mineralization defined by the previous operator’s drilling. Following this work, ground-based Quantec Orion 3D induced polarization and magneto – telluric surveys were conducted to further define porphyry and epithermal targets across the property, which remain untested.

“The Santa Cecilia gold-copper project represents the culmination of our acquisition strategy in Chile. It is our belief that exploration at a project of this magnitude will be transformative for Torq. I would like to thank our entire team, both here in Vancouver and on the ground in Chile, for all their contributions. We look forward to unlocking the exploration potential of the property and adding long-term value for all stakeholders, including surrounding communities, through their involvement in our progress as we earn our social license by operating in a transparent, responsible and respectful manner.”

“Santa Cecilia completes an extraordinary exploration pipeline, which includes our Margarita iron-oxide-copper-gold project, where drilling is ongoing, and the Andrea copper porphyry project, where exploration is expected to commence in early 2022. Our premier portfolio provides the Company with great potential to make Chile’s next significant copper-gold discovery.”

There are three primary target types associated with the 10 square km surficial hydrothermal alteration footprint: 1) Surface epithermal disseminated oxide gold mineralization defined by the previous operator’s shallow drilling, 2) High-grade gold-silver epithermal structures and veins, as observed in the previous operator’s exploration tunnel and associated drilling, and 3) Underlying copper – gold – molybdenum porphyry mineralization analogous to the Newmont/Barrick Caspiche and Cerro Casale deposits, as defined by the 2011-2012 drill holes (Figure 3). (See disclosure regarding information from previous operators, which has been reviewed by the Company)

“Santa Cecilia represents an extraordinary opportunity for discovery in Chile. Effectively, it gives us the rare ability to step back in time, to the early 1990’s, when the first round of discoveries were being made within the Maricunga belt. The previous operator’s drilling has suggested a large oxide gold system and the potential for high-grade precious metal structures, while the two holes in 2012 have demonstrated a bona fide porphyry system beneath the near surface oxide mineralization. We are in an excellent position to expand both the oxide and porphyry mineralized systems as well as to drill entirely new high quality targets for the first time, which we believe have the potential to contribute to the discovery of a cluster of mineralized porphyry bodies.”

“As an explorationist, to be able to identify, acquire and begin exploration at a project such as Santa Cecilia, located within the gold-copper porphyry belt in Maricunga, is an exceptional event. Our group in Chile has been pursuing this project for many years, and finally, with the full Torq Resources team, we have been able to negotiate a favorable agreement. This is a significant milestone, and we very much look forward to initiating exploration at a project we believe holds significant potential for the discovery of a world-class gold-copper deposit.”

The surface mapping, soil sampling, rock sampling and 14,000 m drill program completed by the previous operator were primarily across the Cerro del Medio target area of the project and focused on identifying shallow epithermal mineralization (Figure 3). Select highlights from the previous operator’s drilling include 1.31 g/t gold equivalent (AuEq) over 34 m, 1.02 g/t AuEq over 22 m, 0.58 g/t AuEq over 162 m, 0.54 g/t AuEq over 132 m and 0.43 g/t AuEq over 256 m. Figure 4 illustrates a representative three-dimensional view of the mineralization drilled by the previous operator. Additional results from that drill program are presented in Table 1. Torq’s technical team considers these results to be significant as they demonstrate the need for further drilling to potentially define a mineralized body at shallow depths. The mineralization encountered in the drill holes is primarily oxide gold and gold – copper mineralization from surface to depths of approximately 250 m. This near surface mineralization is primarily characterized by extensive zones of silica stockwork veining associated with hematite and jarosite as well as minor silica – pyrite veins.

The Vetas Condor high-grade gold – silver epithermal mineralization is encountered on the western flanks of the Cerro del Medio target area where east-west trending quartz – alunite structures are exposed over a 1 km by 350 m area (Figure 5). The previous operator completed a total of 1,100 m of horizontal exploration tunnels that were oriented sub-parallel to parallel to the quartz-alunite ledges. Evidently, crosscuts oriented perpendicular to the structures were not completed and therefore true width of the high-grade mineralization was not determined.

The Vetas Condor high-grade gold – silver epithermal mineralization is encountered on the western flanks of the Cerro del Medio target area where east-west trending quartz – alunite structures are exposed over a 1 km by 350 m area (Figure 5). The previous operator completed a total of 1,100 m of horizontal exploration tunnels that were oriented sub-parallel to parallel to the quartz-alunite ledges. Evidently, crosscuts oriented perpendicular to the structures were not completed and therefore true width of the high-grade mineralization was not determined.

Torq’s technical team believes that the high-grade mineralization encountered in the tunnel has not been adequately tested. There have only been three shallow drill holes testing the veins encountered in the first 200 m of the exploration tunnel, which included 6.82 g/t gold and 16.8 g/t silver over 20 m at a depth starting at 110 m (Figure 5) (true width unknown). Table 3 below summarizes drill results from the three drill holes that tested below the tunnel. Torq plans to aggressively explore for high-grade gold – silver mineralization along the 1 km long corridor defined by quartz - alunite structures.

A two-hole drill program to test for porphyry mineralization beneath the epithermal mineralization encountered in the previous operator’s drilling was conducted from January 2012 to May 2012. The two holes were drilled from the northern side of the topographic high, defining the Cerro del Medio target area, and both intersected hundreds of metres of gold – copper – molybdenum porphyry-style mineralization (Figure 6). Drill hole CDM 03 intersected 0.45% CuEq over 925.7 m consisting of 0.21 g/t gold, 0.27% copper and 82 ppm molybdenum, beneath the drilled gold mineralization from surface of 1.38 g/t gold over 24 m (drill hole SP-SC-24) by the previous operator in 1989 (Figure 7). This demonstrates the potential for mineralization over one vertical kilometre from surface that remains open at depth and laterally. Table 4 below lists the intercepts from both drill holes.

To the east of the Cerro del Medio area, where the majority of the historical exploration work has been conducted, are the Las Pircas and Pircas Norte target areas. These targets are located approximately 2 – 3 km from the Caspiche deposit and are defined by areas of strong epithermal silicification alteration, which Torq’s technical team believes have significant potential for the discovery of underlying porphyry mineralization (Figure 3). This is supported by the low resistivity and moderate chargeability geophysical signatures, which start at depths as shallow as 250 m beneath the surface, as defined in the 2012 ground-based Quantec IP and magneto-telluric surveys (Figure 8). Both targets are characterized by resistivity lows of between 3 – 10 ohm m and moderate chargeability values of 30 – 40 mrad, which are consistent with the geophysical responses associated with porphyry mineralization under the Cerro del Medio target area. Together, these anomalies are approximately 1 km by 500 m, as defined by the resistivity data, but remain open at depth (Figure 8). Historical soils show a gold – silver – copper – molybdenum anomaly over the target areas coincident with the geophysical anomalies. The Las Pircas target area has only five shallow historical drill holes, totaling 476 m, that did not intersect the geophysical anomalies, leaving the target untested. The Pircas Norte target is under cover and has never been drill tested. Three rock grab samples taken from a small, isolated outcrop within the target reported a best result of 1.4 g/t gold and 0.5% copper associated with stockwork veining from a diorite porphyry exhibiting chlorite alteration after secondary biotite. Torq plans to aggressively explore the Las Pircas and Pircas Norte target areas with surficial programs to rapidly advance them to drill stage.

Torq acquired the rights to explore the Santa Cecilia project via an option agreement that allows the Company to acquire a 100% interest in the project, subject to net smelter return (NSR) royalties, through cash payments (Table 5).

The Company has also committed to the following work expenditures, which are scheduled from the date it obtains the necessary permits to start its exploration campaigns, including the authorization from indigenous communities located in the area of interest (Table 6).

The option agreement each includes an NSR of 3%, half of which is buyable once the option is executed for a price that will be based on the fair value of the project, determined by mutual agreement between the parties.

Michael Henrichsen (Chief Geologist), P.Geo is the QP who assumes responsibility for the technical contents of this press release.