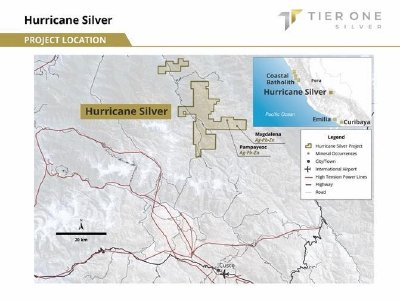 (PresseBox) ( Vancouver, Canada, 22.09.21 )
Tier One Silver (TSXV: TSLV, OTCQB: TSLVF) (“Tier One” or the “Company” - https://www.commodity-tv.com/ondemand/companies/profil/tier-one-silver-inc/) is pleased to announce that it has commenced surface exploration on its 31,503-hectare Hurricane Silver project located in southern Peru, approximately 66 kilometres (km) north of the city of Cusco (Figure 1). The Company has signed a two-year community agreement that provides surface access to the Magdalena silver prospect and half of the Pampayeoc silver prospect and will allow for drilling once a final permit has been obtained from the Peruvian Ministry of Energy and Mines (Figure 2). The Magdalena and Pampayeoc prospects are characterized by historical mining adits and numerous high-grade silver showings, including the following reconnaissance chip sampling results collected by the previous operator: 1.4 metres (m) of 1,175 g/t silver, 2.1 m of 792 g/t silver, 2.5 m of 589 g/t silver and 14 m of 100 g/t silver.

“We are excited to begin work at Hurricane Silver, a second major silver discovery opportunity in Peru. This project is in its early stages but, much like Curibaya, has demonstrated grade and width in multiple rock and chip samples – the hallmarks of a potentially significant system.”

“At Curibaya we have completed our fifth drill hole and plan to complete eight additional holes before year-end.  We are looking forward to a continuous flow of drill results in the coming months, in addition to further surface results, as we have not yet identified the limits of the silver system. Together, we believe that the Curibaya and Hurricane Silver projects represent multiple world-class silver discovery opportunities.”

The property is considered highly underexplored as there has been no systematic exploration conducted on the Magdalena and Pampayeoc prospects. The Company plans to conduct geologic mapping and rock sampling focused on the 1.5-km-long Magdalena vein system to determine the grade and width of exposed veins with additional soil sampling to determine the mineralized footprint under soil and glacial cover. After this first pass of surface work, ground-based geophysical surveys will be conducted to clearly define drill targets so that the Company may apply for a drill permit in Q1 2022.

Michael Henrichsen (Chief Geologist), P.Geo is the QP who assumes responsibility for the technical contents of this press release.

ON BEHALF OF THE BOARD OF DIRECTORS OF TIER ONE SILVER INC.

Tier One Silver is an exploration company focused on creating value for shareholders and stakeholders through the discovery of world-class silver, gold and base metal deposits in Peru. The Company’s management and technical teams have a strong track record in raising capital, discovery and monetization of exploration success. The Company’s exploration assets in Peru include: Hurricane Silver, Emilia, Coastal Batholith, Corisur and the flagship project, Curibaya, which has commenced its first drill program. For more information, visit www.tieronesilver.com.

The historical grab and chip samples from the Hurricane project were collected by Compania de Exploraciones Orion SAC (2007-2009), a Pembrook Copper affiliate, and were included in a database obtained in connection with the transaction. Given the time interval, Tier One Silver has not assessed the validity of the QA/QC protocols that were followed in the collection of these samples. Accordingly, readers are cautioned about reliance on the accuracy or repeatability of this sampling. Sampling is of very limited geological significance and serves only to assist the development of a methodical exploration program involving geochemical, geophysical and ultimately diamond bit drill core drilling. There is no known mineral resource of commercial interest established at the Hurricane Silver project.

The historical grab and chip samples from the Hurricane Silver project were collected by Compania de Exploraciones Orion SAC (2007-2009). Tier One checked approximately 5% of the analytical data entries for the provided rock samples database against the signed PDF assay certificates from 2007, 2008, and 2009. No data entry errors were found. Tier One considers that the provided rock database is of a good quality.

Grab and Chip Samples
Tier One conducted a 3-day field visit to visually confirm the presence of mineralized outcrops historically reported, with check reconnaissance sampling completed. Approximately 3-5kg of material was collected for analysis and sent to ALS Lab in Lima, Peru for preparation and analysis. All samples were assayed using 30g nominal weight fire assay. Platinum and Paladium were analyzed by ICP and MS (PGM-MS23); Gold was analyzed by ICP and AES finish (Au-ICP21), for samples assaying above 10 ppm from ICP21 the assay was repeated with 30g nominal weight fire assay with gravimetric finish (Au-GRA21). Silver and Base Metals were analyzed as part of the multi element package (ME-MS41), or to trace levels in 36 multi element package (ME-ICP41), In 2009, Silver analysis was completed by 30g fire assay with gravimetric finish (Ag-GRA21). Where MS41, ICP41 results were greater than 10,000ppm Cu, 10,000ppm Zn, 10,000ppm Pb or 100ppm Ag the assay was repeated with ore grade aqua regia digestion with AA finish (Cu-AA46; Zn-AA46; Pb-AA46; Ag-AA46 respectively).