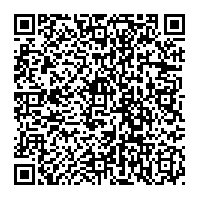 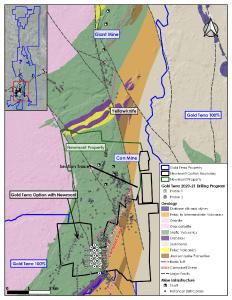 (PresseBox) ( Vancouver, B.C., 18.11.20 )
Gold Terra Resource Corp. (TSX-V: YGT; Frankfurt: TX0; OTCQX: YGTFF) (“Gold Terra” or the “Company” - https://www.commodity-tv.com/ondemand/companies/profil/gold-terra-resource-corp/) is pleased to announce the start of a 12,000 metre drilling program to test the Campbell Shear, south of the former producing Con Mine, on the Company’s recently optioned property from Newmont Ventures Limited and Miramar Northern Mining Limited (“Newmont”), adjacent to its 100% wholly-owned Yellowknife City Gold (“YCG”) project in the Northwest Territories. In this Phase 1 program, the Company plans to drill up to 19 holes testing over 1.2 kilometres of strike extension of the Campbell Shear at vertical depths between 250 and 600 metres to extend known gold mineralization (Figure 1. Plan View) (Figure 2. Plan View – Close-up).

Executive Chairman Gerald Panneton stated: “The Campbell Shear target where more than 13 million ounces of Gold has been produced historically (Con and Giant mines)2 is the main reason I joined Gold Terra one year ago. Our first priority was to secure the option agreement with Newmont (Refer to news release September 8, 2020) and now the time has come to start our drilling program on the prolific Campbell Shear extension immediately south of Newmont’s Con Mine. We are very excited to begin drilling this month on what we believe to be one of the most prospective targets in the Yellowknife mining camp.”

Compilation work further identified that the majority of the historical drilling south of the Con Mine targeting the Campbell Shear structure was terminated at the first shear zone intersection and failed to test the footwall. Some of Gold Terra’s Phase 1 drilling will target beyond the current known structure and into the Jackson Lake Formation.

Based on the success of Phase 1 drilling (approximately 12,000 metres), the Company will plan a deeper  Phase 2 program, which will include a series of holes testing the Campbell Shear at 800 metres depth below the area tested by Phase 1.

The objective of this Phase 1 drilling program is to test the Campbell Shear over a strike length of nearly 1.2 kilometres at 125-150 metre spacing (Figure 2. Plan View – Close-up). The first series of holes are intended to intersect the Campbell Shear between 250 and 600 metres below surface and continue through the footwall to cross the entire width of the shear (Figure 4. Long Section – Close-up). The drilling program also includes a second series of drill holes to test the shear at 800 meters below surface, subject to the success of the Phase 1 drilling results.

Gold Terra has filed for an amendment to its Land Use permit (LUP) with the Mackenzie Valley Land and Water Board (MVLWB) and expects drilling to commence in November on its 100% owned Southbelt property using its current LUP. Drilling will continue all winter long as per the Covid-19 policy already in place with same local manpower. The company is fully funded to complete the Phase 1 drilling program.

1 The intersections stated here are historical in nature and has not been verified by Gold Terra. Hole location, downhole survey, assay and lithologic data was obtained from the Con mine databases, and therefore is assumed by Gold Terra to be reasonably valid.

The technical information contained in this news release has been reviewed and approved by Joseph Campbell, Chief Operating Officer, a Qualified Person as defined in National Instrument 43-101 – Standards of Disclosure for Mineral Projects.

The YCG project encompasses 800 sq. km of contiguous land immediately north, south and east of the City of Yellowknife in the Northwest Territories. Through a series of acquisitions, Gold Terra controls one of the six major high-grade gold camps in Canada. Being within 10 kilometres of the City of Yellowknife, the YCG is close to vital infrastructure, including all-season roads, air transportation, service providers, hydro-electric power and skilled tradespeople.

The YCG lies on the prolific Yellowknife greenstone belt, covering nearly 70 kilometres of strike length along the main mineralized shear system that host the former-producing high-grade Con and Giant gold mines. The Company's exploration programs have successfully identified significant zones of gold mineralization and multiple targets that remain to be tested which reinforces the Company's objective of re-establishing Yellowknife as one of the premier gold mining districts in Canada.

There can be no assurance that such statements will prove to be accurate, as the Company's actual results and future events could differ materially from those anticipated in this forward-looking information as a result of the factors discussed in the "Risk Factors" section in the Company's most recent MD&A and annual information form available under the Company's profile at www.sedar.com.