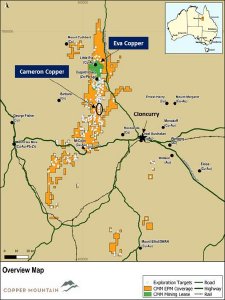 (PresseBox) ( Vancouver, British Columbia, 12.10.21 )
Copper Mountain Mining Corporation (TSX: CMMC | ASX:C6C) (the “Company” or “Copper Mountain” - https://www.commodity-tv.com/...) is pleased to announce positive results from 48 drill holes, totaling 7,936 metres, drilled on the C6, C1 and C2 targets at its Cameron Copper Project (“Cameron”), as part of ongoing exploration at the property. The drill program encountered intercepts of high-grade mineralization, within long, low-grade mineralized envelopes, with lateral continuity between intercepts of up to 1 kilometre. The Company plans to carry out further drilling that will also include new undrilled targets with significant copper-gold anomalies in surface soil and rock samples. Cameron is situated 40 kilometres south of the Company’s Eva Copper Project (“Eva”), located in the Mount Isa region of Queensland, Australia, near Cloncurry. See Appendix 1 for a regional location map.

Please see Appendices 2 to 11 for drill hole locations and plans. Appendices 12 and 13 have a complete drill hole table and associated data. Highlights from the drill program:

“These results are very promising and validate these priority targets,” commented Gil Clausen, Copper Mountain’s President and CEO. “They indicate that there is a potential for a larger mineralized system. This was an initial exploratory drill program to test the geophysical and geochemistry work done to date. These mineralized zones show more continuity with increased drilling. The drilled zones remain open to expansion, and there are numerous targets yet to be drill tested. More drilling is required, and we plan on putting a systematic program in place to develop these targets with additional drilling this year and into 2022. The current results confirm our belief that there is potential for discovery of copper resources."

Systematic definition of large mineralized systems at Cameron is the goal of the current exploration program. The ongoing drill program will test mineralization laterally and to depth to establish economic potential. The C6, C1 and C2 targets were the focus of the initial phase of this work plan. The drill program included 7 diamond core and 41 reverse circulation (RC) hammer holes. At C6, C1 and C2 targets, the drilling intersected both oxide and sulphide mineralization at varying depths. Mineralized zones are open, and the extent of mineralization as indicated by surface geochemistry or geophysical data have not been fully tested. The host rocks, intersected mineralization, and the element association is typical of IOCG (Iron Oxide Copper Gold) deposits. The Company is undertaking further exploration drilling at Cameron in 2021, with a more extensive resource drill program proposed for 2022.

Cameron mineralization combines disseminated, fracture-controlled and strata-bound styles similar to the Eva IOCG deposits. The drilled C6, C1 and C2 targets are part of a cluster of copper-in-soil anomalies along a broad North-South structural corridor. Eva’s Mineral Resource sits within the northern half of this same corridor. Eva has a Measured and Indicated Mineral Resource (inclusive of Mineral Reserves) of 261 million tonnes grading 0.42% copper and 0.04 g/t gold, containing an estimated 2.4 billion pounds of copper and 330,000 oz of gold (for further information please see the technical report titled “NI 43-101 Technical Report for the Eva Copper Project Feasibility Study Update, North West Queensland, Australia”, dated May 7, 2020 with an effective date of January 31, 2020). See Appendix 14.

At C6 (Appendix 3), copper mineralization has been drill tested by 3 diamond and 19 RC holes with broad spacing over a 1 kilometre strike length. The target area includes the historic Quamby gold mine, from which 75,600 ounces of gold were recovered from leaching operations in the 1980's and 1990's. The reported drilling herein tested mineralization southwest of the mine workings beneath a large copper and gold-in-soil anomaly.

The RC drilling was relatively shallow and consisted of 15 holes on sections spaced at 60 to 100 metre intervals with the objective of testing the copper-gold soil anomaly. The drilling indicates a continuous zone of copper mineralization, which is up to 145 metres wide and consists of lower-grade copper, with higher-grade zones localized in a major fold hinge. Mineralization occurs as disseminated chalcopyrite and pyrite hosted in strongly altered metasediments below the weathered zone, which is approximately 25 to 75 metres deep. Oxide mineralization in the weathered zone consists of malachite, native copper and chalcocite, similar to Eva’s ‘copper-only’ type deposits. All mineralization is open along strike and at depth.

At C1 (Appendix 6), the mineralized system appears extensive, with soil anomalies defined over an area of 0.6 kilometres by 3 kilometres. The southern part of the anomaly remains undrilled. Drilling to date has only tested 1.2 kilometres of the surface strike length. Appendix 6 provides a drilling plan related to soil anomalies and illustrates the broad zone of multiple intercepts and the relationship to the much larger copper-in-soils anomaly.

The new drill results combined with those from previous campaigns, together with geology and soil geochemistry, confirm the discovery of a large, structurally controlled copper-gold system. Mineralization consisting of chalcopyrite and pyrite, is hosted in variably altered metasediments. In the weathered zone, mineralization occurs as malachite and goethite, commonly to depths of 20 metres but locally up to 75 metres. The higher grade mineralization formed within the primary structures as discrete lodes and shoots. The mineralization is open along strike and at depth.

At C2 (Appendix 9), copper mineralization has been drilled systematically within zones having lateral extents of 1.2 kilometers by 0.55 kilometers, within a more extensive 3-kilometre-long area of coincident geochemical and geophysics anomalies.

Drilling consisted of 4 diamond and 7 RC holes. Holes were drilled on 200 metre spaced sections on the larger northern zone, and 100 metre sections on the southern zone. The drilling identified multiple higher-grade tenor zones within broader lower grade mineralization envelopes, which were drilled to vertical depths of 160 metres in the southern zone and 200 metres in the northern zone. Copper mineralization varies from disseminated to fracture-fill veinlets of chalcopyrite, chalcocite, and native copper hosted in strongly altered metasediments. However, malachite and goethite form the mineralization in the near surface oxide zone. Mineralization is open along strike and at depth.

Drillholes were logged by geologists at the rig (RC) or at the Company’s central exploration office (DD) using company standard logging procedures. DD core and RC samples are transported to the Company’s exploration office area by geological staff. RC samples were rotary split at the drill rig with a typical sub-sample sizes of 2kg. RC duplicate sub-samples were rifle split. Sample intervals are marked on DD core which is halved by diamond saw; quarter core used for duplicates. Sample length is usually 1m for RC and for diamond core. Blanks, field duplicates and certified standards are inserted into the sample stream at a 1:10 ratio. The RC chip and half core samples are sent in sealed shipping crates to an accredited commercial laboratory (ALS) where samples are dried, crushed, split, pulverized and assayed. Such laboratory is independent from Copper Mountain. The pulverized sample is analyzed by 50 g fire assay and multielement ME-ICP that includes copper, with a detection limit of 10,000 ppm. On return of gold values > 100 ppm Au and copper values >1% Cu; a second series of analyses are completed using appropriate ‘ore grade’ methods. The drill samples were collected in accordance with accepted industry standards. The results from QA/QC samples are routinely analyzed by the database manager and geologist on a batch and campaign basis. There are no known issues that would materially affect the accuracy or reliability of the analytical data from the drill program presented herein.

The information in this report that relates to exploration targets, exploration results, Mineral Resources or ore reserves is based on information compiled by Peter Holbek, B.Sc (Hons), M.Sc. P. Geo. Mr. Holbek is a full time employee of the Company and has sufficient experience which is relevant to the style of mineralization and type of deposit under consideration and to the activity being undertaken to qualify as a Competent Person as defined in the 2012 Edition of the 'Australasian Code for Reporting of Exploration Results, Mineral Resources and Ore Reserves. Mr. Holbek consents to the inclusion in this news release of the matters based on the information in the form and context in which it appears.
Peter Holbek is a qualified person as defined by National Instrument 43-101 (“43-101”) and has reviewed and approved the technical content of this release.

Copper Mountain’s flagship asset is the 75% owned Copper Mountain Mine located in southern British Columbia near the town of Princeton. The Copper Mountain Mine currently produces approximately 100 million pounds of copper equivalent per year, with average annual production expected to increase to approximately 140 million pounds of copper equivalent. Copper Mountain also has the development-stage Eva Copper Project in Queensland, Australia and an extensive 2,100 km2 highly prospective land package in the Mount Isa area. Copper Mountain trades on the Toronto Stock Exchange under the symbol “CMMC” and Australian Stock Exchange under the symbol “C6C”.
Additional information is available on the Company’s web page at www.CuMtn.com.

Generally, forward-looking statements can be identified by the use of terminology such as “plans”, “expects”, “estimates”, “intends”, “anticipates”, “believes” or variations of such words, or statements that certain actions, events or results “may”, “could”, “would”, “might”, “occur” or “be achieved”. Forward-looking statements in this news release include statements concerning, among other things: the timing of the Company’s drilling program; the results of the Company’s exploration and development programs; the potential for discovery of significant resources at Cameron similar to Eva, the timing of studies, announcements, and analysis; the potential to add the expected increase in the Company’s average annual production; the Company’s intentions regarding its objectives, goals or future plans; and all other timing, exploration, development, operational, financial, budgetary, economic, legal, social, environmental, regulatory, and political matters that may influence or be influenced by future events or conditions. Forward-looking statements involve risks, uncertainties and other factors that could cause actual results, performance and opportunities to differ materially from those implied by such forward-looking statements. Factors that could cause actual results to differ materially from these forward-looking statements include the successful exploration of the Company’s properties in Canada and Australia, the reliability of the historical data referenced in this press release and risks set out in Copper Mountain’s public documents, including in each management discussion and analysis, filed on SEDAR at www.sedar.com. Although Copper Mountain believes that the information and assumptions used in preparing the forward-looking statements are reasonable, undue reliance should not be placed on these statements, which only apply as of the date of this news release, and no assurance can be given that such events will occur in the disclosed time frames or at all. Except where required by applicable law, Copper Mountain disclaims any intention or obligation to update or revise any forward-looking statement, whether as a result of new information, future events or otherwise.

This press release includes Mineral Reserves and Mineral Resources classification terms that comply with reporting standards in Canada and the Mineral Reserves and the Mineral Resources estimates are made in accordance with NI 43-101. NI 43-101 is a rule developed by the Canadian Securities Administrators that establishes standards for all public disclosure an issuer makes of scientific and technical information concerning mineral projects. These standards differ significantly from the requirements of the U.S. Securities and Exchange Commission (“SEC”) set out in the SEC rules that are applicable to domestic United States reporting companies. Consequently, Mineral Reserves and Mineral Resources information included in this press release may not be comparable to similar information that would generally be disclosed by domestic U.S. reporting companies subject to the reporting and disclosure requirements of the SEC. Accordingly, information concerning mineral deposits set forth herein may not be comparable with information made public by companies that report in accordance with U.S. standards.