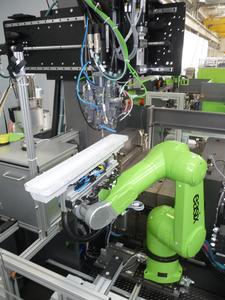 (PresseBox) ( Cologne, 27.06.12 )
At this year's ENGEL Symposium, which was held June 13 and 14 at the ENGEL AUSTRIA facilities in St. Valentin, under the motto "close to the customer. open to innovation", the ENGEL system partner - the Sonderhoff group of companies - presented the integrated process solution MOLD'n SEAL to the symposium participants. According to ENGEL, more than 2700 guests from the international injection moulding industry and supplier industry attended the symposium. Presentations given in the Linz Design Centre provided guests with information concerning intelligent function integration and the future of injection moulding. With great interest, visitors experienced for themselves the innovation potential for shorter cycle times, greater productivity, and reduced energy consumption in injection moulding manufacturing at the 18 machinery exhibit stations in ENGEL AUSTRIA's large machine plant.

Based on the exhibited 18 highly integrated and automated manufacturing cells, ENGEL impressively demonstrated how efficiency potential can be optimally exploited through individual adaptation of the systems to the different task formulations of injection moulding manufacturing. In collaboration with ENGEL, Sonderhoff presented MOLD'n SEAL, a particularly sophisticated integration solution, which in terms of efficiency and product quality combines the two previously separate processes of injection moulding and foam gasketing. Thus pre-produced injection moulded parts and expensive intermediate storage can be dispensed with. On an ENGEL "victory 1350/300 tech series" hydraulic injection moulding machine, housings for moisture-proof luminaires from Zumtobel Lighting were injected and then provided with a Sonderhoff polyurethane sealing bead immediately thereafter. Extremely short curing times of two to three minutes for the gasketing material from Sonderhoff Chemicals that is used enable faster further processing of the components and thus significantly greater time savings for the entire manufacturing cycle. In addition, MOLD'n SEAL also saves costs and space. Investment and personnel costs can be reduced thanks to the high level of integration. Instead of the two robots previously required, with the MOLD'n SEAL process only one robot is required for the parts handling of both procedures injection moulding and foam gasketing. This results in a significantly reduced space requirement of just 24 m², - much less than the space required for the previous manufacturing concept.

In the injection moulding process, the application of foam gaskets is determined by the injection moulding cycle, the cycle time. Within 55 seconds per injection moulding cycle, in an eight hour shift, without interruption a total of 523 luminaire housings could be injection moulded, removed from the mould, foamed, and placed on a discharge belt for curing and further processing. In this specific application case the MOLD'n SEAL process was appropriately adapted to the injection moulded part as follows: The housing of the moisture-proof luminaires is taken out of the injection moulding system by an ENGEL "easix" robot and placed in a waiting and cooling position. Then the robot arm grasps an already cooled component, guides it past an ionizing station to the MK 600 mixing head of the Sonderhoff mixing and dosing system, and positions the groove of the luminaire housing directly below the mixing head dosing needle. The multi-axis robot is programmed so that it moves the mixing head, accurately tracking the groove contour of the component; the dosing needle of the MK 600 precisely applies the gasketing material on the base of the groove which is only a few millimetres thick. The output rate of the mixing head is only 0.45 g/s. After placement on the discharge belt the injection moulded part cools and the foam gasket hardens within two to three minutes. Thus, further processing is possible after just a short time. The specially developed fast reacting, 2-component gasket material from the FERMAPOR K31 product line of Sonderhoff Chemicals can bridge a mixing head standby time of 25 seconds. Within this interim the robot arm takes a new part out of the injection mould, places it in the cooling position, removes a part that has already been placed there, guides it past the ionizing station, and when the part is positioned under the mixing head, starts the sealing application again.

For Sonderhoff, the challenge in developing the MOLD'n SEAL procedure was formulating a gasket material with which the reaction of the two material components can be adapted to each specified injection moulding cycle, and with which the sealed part can be quickly further processed after a short curing time for the applied gasket of two to three minutes. For the MOLD'n SEAL procedure, the sealing specialist, the Sonderhoff Chemicals GmbH in Cologne/Germany, developed new formulations for fast-reacting foam gasket systems, the so called Fast-Cure gaskets from the FERMAPOR K31 product line that enable in-line processing in the injection moulding cycle. Due to the high reactivity of the gasket material, the Fast-Cure gaskets from Sonderhoff cure extremely quickly, and thus the foamed injection moulded parts can also be further processed more quickly. This results in significant time savings for the entire manufacturing process.

The Sonderhoff group of companies, as a technology leader in the area of FIP(F)G (Formed In-Place (Foam) Gasketing), analyses the development trends in the various customer segments and converts these trend analyses into product innovations. For example, increasing energy costs have resulted in the fact that in all industrial sectors, companies are constantly considering more efficient and sustainable manufacturing methods. These topics are also highly significant for Sonderhoff customers, the plastic processors and injection moulders, as they have a crucial impact on becoming more competitive internationally. Consequently, Sonderhoff developed the MOLD'n SEAL procedure - the in-line processing of injection moulded components with subsequent direct application of a polyurethane gasket - to offer the customer a cost-saving and time-saving integration solution with minimal space requirements. The machines used in the MOLD'n SEAL procedure can be flexibly adapted to the respective manufacturing situation of the customer, the design of the component to be sealed, and to the requirement profile of the sealing product system. Due to the combination of the injection moulding system with the mixing and dosing systems, space, time and energy, and thus costs, can be saved. However, the lower automation effort achieved through process integration not only results in reduced space requirements for production, it also results in savings in investment and personnel costs. The overall result enables higher manufacturing output, at lower cost per unit.

The Sonderhoff group of companies with its headquarters in Cologne / Germany is the leading system supplier and manufacturer of polymer sealing, gluing and potting formulations, dispensing machines and automation concepts as well as for contract gasket application services.

The sealing products from Sonderhoff are used for foam gasket, gluing and potting applications of various industrial components, for instance, from the switch board enclosure, electronics, automotive, air condition, filter, photovoltaic, packaging or household appliance industry.

The Sonderhoff System combines chemical and technical competence with creative engineering know-how in the fields of mixing and dosing of sealing material and process engineering provided with a comprehensive service entirely focused on satisfied customers.

Sonderhoff Chemicals GmbH (Cologne / Germany) develops, produces and distributes worldwide polymer sealing, gluing and potting systems on polyurethane, silicon and PVC basis. Their performance is based on the experience of more than thousand formulations. The sealing material is applied onto structural components and modules of OEMs and industrial suppliers by the FIPFG / FIP (Formed-In-Place Foam Gasket / Formed-In-Place) technology.

Sonderhoff Engineering GmbH in Hörbranz / Austria develops and distributes all over the world low pressure metering systems, from stand-alone dispensing machines to automation concepts according to customers' specifications for fully automated production lines of foam sealing, gluing and potting.

Sonderhoff Services GmbH (Cologne / Germany) and Sonderhoff Polymer-Services Austria GmbH (Dornbirn / Austria) have positioned themselves as toll manufacturers for foam gasket, gluing and potting applications with the highest precision. Their services comprehend individual sampling of prototypes as well as sealing, gluing and encapsulation of parts, from pilot application processes and small batches up to serial production for OEMs and industrial suppliers in Germany, Switzerland and Austria. Partner companies undertake the toll manufacturing of foam gasket and potting for the customers in England, India, Japan and Korea.

The sister companies of the Sonderhoff Group in Italy, Spain, the U.S.A and China offer the complete range of sales, technical and contract gasket application services to the OEMs in these countries as well as production and sales of chemicals for the sealing formulations and the distribution of dispensing machines from Sonderhoff."