Sensors from Germany on board again 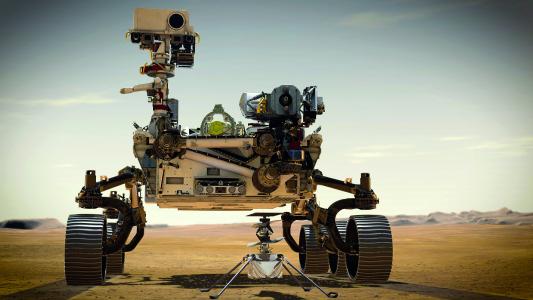 (PresseBox) ( Wetzlar, 01.03.21 )
On 30 July 2020, NASA once again launched one of the most complex projects in space travel. The super-modern Mars rover "Perseverance", the size of a small car, packed in a high-tech shell and crammed with motors, computers, instruments and sensors, was sent on its mission to Mars to search for traces of organic materials, the cornerstone of life on Mars. Once again, sensors from Hesse, manufactured by the Wetzlar-based company Sensitec, are on board.

The space capsule had to cover 472 million kilometres, but the last seven minutes are the crucial ones. The landing on 18 February at 21.43 CEST went according to plan, which pleased not only the NASA engineers but also the sensor supplier from Wetzlar.

During the landing, one of the largest supersonic parachutes was again used to slow down the capsule. At the moment of opening, the mountings had to withstand nine times the acceleration due to gravity. Then the heavy heat shield was dropped so that the radar could constantly measure the exact distance to the surface of Mars. The next step was for the capsule to release a platform with eight braking rockets, which ignited immediately. Only this slowly descending platform roped the rover down to the bottom of Mars. The rover's six legs with their wheels then had to unfold until the soft touchdown. The moment "Perseverance" touched the ground, the cables were still cut and the flying platform was steered away from the landing site until it fell to the bottom somewhere some distance away.

"We were cheering along in front of the TV during the live broadcast and hoping that the landing would be successful, just as it was with Curiosity in 2012, and when the rover sent the first images, we were very proud," explains Dr. Rolf Slatter, who as CEO of Sensitec has accompanied all previous projects with NASA.

On board are sophisticated scientific instruments. Similar to the Curiosity Mars mission, the miniaturised magnetoresistive (MR) sensors provide information on the angular position of the wheels, the steering, the camera and the communication antenna. Six Sensitec sensors are installed in the wheel drives and four in the steering drives. They ensure that the vehicle can be moved and steered. Perseverance can turn on the spot and reaches a top speed of 152 metres/hour. In the remote sensing mast, three sensors are used to position the 3D camera that will provide high-resolution images of the Martian surface. There are two sensors in the high-power antenna for direct communication with Earth, and five more sensors are operating in other instruments, for a total of about 20 MR sensors on board. Although these are designed for use under extreme temperature fluctuations and high radiation loads on the surface of Mars, which they have already successfully demonstrated in the Mars projects "Spirit and Opportunity" as well as "Curiosity", such projects also mean an exciting undertaking for the sensor manufacturer. Because if the sensors don't work, it means that "Perseverance" won't get far on Mars and communication with Earth will become impossible. The mission on Mars is a kind of supreme discipline for the sensors used. The vibrations during the rocket launch, the vacuum during the journey, the shocks during the landing and finally the harsh conditions on the Martian surface accompanied by temperatures between -125 and +20 degrees Celsius as well as the high radiation exposure are an absolute endurance test for every sensor. Since the MR sensors are particularly robust, they are now being used for the third time in space projects of this kind after the previous missions. For NASA, Sensitec is an important project partner, because sensors based on other functional principles are not suitable for the extreme environmental conditions. When it comes to angle sensor technology, Sensitec has a market share of 100 per cent on Mars, so to speak.

But apart from the extremely complex technology used in the realisation of the space projects, there is always another important task to be completed as soon as the next Mars rover is in the starting blocks: What should be the name of the vehicle that will soon roll over Mars? NASA is putting it to the vote. Among all Internet users. "Perseverance" means something like "staying power". Let's hope that the name says it all.

Perseverance data:
The Mars rover weighs about 1025 kg on Earth. This is equivalent to just under 400 kg on Mars. It is 3 m long x 2.70 m wide and 2.20 m high, roughly the dimensions of a Mini Cooper. The transmission of the radio signals takes about 11.5 minutes to reach Earth. NASA specifies a mission duration of one Mars year, which corresponds to just under two years on Earth, but presumably the duration will be extended here, too, because six months were originally planned for "Opportunity", which turned into almost 15 years from January 2004 to June 2018.