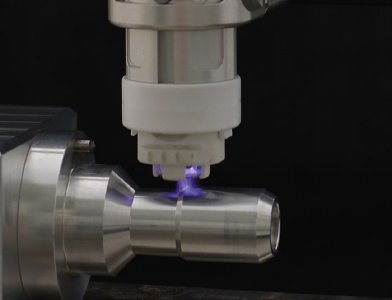 (PresseBox) ( Regensburg/Stuttgart, 06.09.21 )
Relyon plasma from Regensburg, a subsidiary of TDK Electronics AG, is presenting the innovative plasma system piezobrush® PZ3-i at Bondexpo in Stuttgart, the International Trade Show for Adhesive Bonding Technology. Based on PDD® technology, this compact integration solution is suitable for a wide range of surface applications.

Bondexpo opens its doors from October 5-8, 2021, after being cancelled last year. Relyon plasma will present the compact integration solution piezobrush® PZ3-i for the first time in hall 5 at booth 5505. Cold pressure plasma is used to optimally prepare hydrophobic surfaces for bonding by increasing the surface energy and to enable a stable adhesion process.

Piezobrush® PZ3-i – Plasma as the industry standard of the future

The highlight of this year’s trade show appearance is the presentation of the compact integration solution piezobrush® PZ3-i for the first time ever. The cold plasma device is designed for integration into existing production lines and is therefore compact, safe, and efficient. Thus, it is ideally suited for pre-treatment prior to gluing, printing, and laminating. Due to its compact and robust housing, it is easy and uncomplicated to implement the piezobrush® PZ3-i in inline systems. In addition, comprehensive process control is possible in automated production processes, ensuring traceability. The device is intuitive to operate and can be serviced without tools.

Flexible treatment widths due to modularity

Up to now, high-performance systems have been used for automated plasma processes. These are optimized for high process speeds, but this is associated with relatively high demands on process accuracy and control. Especially with temperature-sensitive substrates, overheating of the sample must be avoided. The piezobrush® PZ3-i, on the other hand, simplifies the use of plasma due to the low plasma temperature of less than 50 °C, the supply with low-voltage cables and an occupational safety due to contact safety and low emissions. This opens new application possibilities: With the piezobrush® PZ3-i, it is now possible to achieve optimal and reproducible adhesion results with little effort.

Use cases at the booth

Relyon plasma is looking forward to welcoming interested visitors at the booth. They can experience the new development piezobrush® PZ3-i, the handheld device piezobrush® PZ3 as well as the PAA® technology in action directly on-site and ask the experts application questions. In addition, trade show visitors can also bring their own substrates so that they can see the benefits of plasma treatment for themselves.