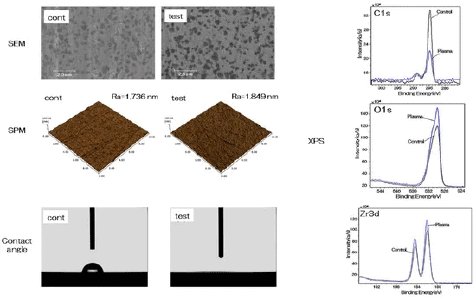 (PresseBox) ( Regensburg, 20.09.21 )
Zirconia ceramics such as ceria-stabilized zirconia/alumina nanocomposites (nano-ZR) are applied as implant materials due to their excellent mechanical properties. However, surface treatment is required to obtain sufficient biocompatibility. In the present study, the material surface functionalization with plasma was explored and the initial adhesion of rat bone marrow mesenchymal stem cells, their osteogenic differentiation, and production of hard tissue, on plasma-treated alkali-modified nano-ZR was assessed.

In this work the piezobrush® PZ2 from relyon plasma was applied for modifying the surface properties of nano-ZR probes with cold atmospheric plasma. The surface properties were assessed. Furthermore, in vitro and in vivo studies were performed. The surface structure of implants is well-defined. Therefore, it is immanent important that a pre-treatment of dental implants prior to immersion does only alter the biocompatibility, while keeping the mechanic properties, such as roughness, unchanged. The surface properties were investigated with scanning electron microscopy (SEM), scanning probe microscopy (SPM), contact angle measurement and x-ray photoelectron spectroscopy (XPS). No changes could be found between the reference and the plasma-treated probe with SEM and SPM. This showed that the surface roughness remains constant, and the macroscopic surface structure is not impacted. With contact angle measurement, however, a completely different picture emerges. The initial contact angle of 63° could be reduced to 0°, indicating superhydrophilicity. This can be explained by the XPS-data. The carbon amount on the surface is decreased, while the oxide and zirconia peak increases. This indicates a removal of carbonous impurities revealing the zirconia.

With fluorescence measurements the cell adhesion of rat bone marrow mesenchymal stem cells (rBMMSCs) and human umbilical vein endothelial cells (HUVECs) was analysed in vitro. The cell-substance interactions are one of the first events to occur between the implant material and the body when the implant is processed during implantation. Not only the number of cells adhered to the implant surface could be increased with the cold plasma treatment, furthermore an elongation of the cells could be observed. These results indicate that changes in surface structure are linked with initial adhesion and proliferation of various cells. Observation of the response of HUVECs to the material surface after implant surgery is important in wound healing considerations.

In vivo experiments were performed by implanting the plasma-treated and control implants in the rat femur. After eight weeks, further investigations were carried out. With three-dimensional macro-CT the increased amount of bone (green) around the zirconia implant (red) becomes obvious. Quantitatively, this was evaluated by the ratio of bone mass to total mass (BV/TV), the average trabecular number (Tb.N), the average trabecular thickness (Tb.Th), and the trabecular separation (Tb.Sp). Except for the last one, all these values were determined to be significantly higher for the plasma treated samples. All these measured parameters indicate a more stable integration of the implant eight weeks after implantation by the plasma treatment.

The new bone formation was further investigated by histological sections. Not only the bone area ratio (BA), but as well the bone-to-implant contact (BIC) was increased by the plasma treatment. Both of them are indications for the quality of osseointegration.

In this publication the effects of treating nano-ZR implants with cold atmospheric plasma were investigated. While the plasma treatment does not affect the roughness of the implant, superhydrophilicity could be achieved. In in vitro and in vivo studies, a faster and better protein, cell, and bone adhesion could be measured, from which can be concluded that atmospheric plasma treatment is useful as a prosthetic treatment option for patients allergic to metal.

You find the whole article here.