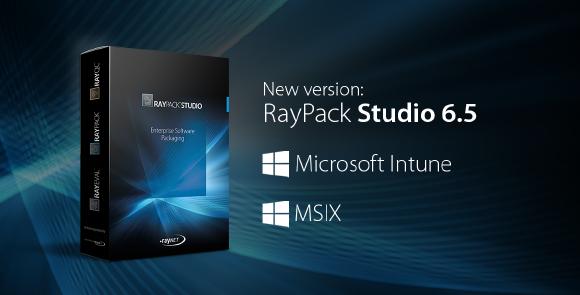 (PresseBox) ( Paderborn, 09.12.20 )
Raynet, Europe's leading provider of services and products for Application Lifecycle Management for Enterprises, is further expanding its pioneering path in the software packaging and virtualization industry with the release of RayPack Studio in the new version 6.5.

Due to the increasing demands on the IT infrastructure of companies, technologies such as Microsoft Intune and MSIX are becoming increasingly important. In the course of this market development Raynet provides new functions and features, which bring enormous added values for the entire industry. Comprehensive performance improvements, optimized usability and intelligent automatisms round off the release of RayPack Studio.

The new version of the software packaging and virtualization solution offers the following feature highlights:

Clear comparison of two MSI, MST or RPP projects including highlighting of differences
To see differences and changes in different versions of MSI, MST files and RPP projects at a glance, they can be easily compared in RayPack Studio. The clear overview of the differences is visually emphasized and brings an enormous reduction of the previous efforts.

New features and improvements for MSIX
The extended MSIX editor now allows applications in MSIX format to be provided with the autostart function. This feature can now be easily edited using the integrated editor.

MSIX still poses challenges for packagers today. The new version of RayPack Studio comes with many fixups that make converting applications to the MSIX format more successful than ever.

Time saving for software packaging documentation
With a new, intuitive wizard any image file (PNG/JPG) can now be selected from different sources and imported into RayEval. Furthermore, the importer supports other RayEval projects, so that already documented parts can be reused in a new documentation.

Checking the readiness of software packages for the latest Windows 10 versions
This release adds rule sets for the two new versions of the Windows client and server operating system families. The new rule sets for Windows 10 20H2 and Windows Server 2019 follow the same principles as the rule sets for earlier versions of Windows 10 and adapt locally to new insights and adjustments.

Raynet offers a 30-day free trial to all interested parties, in order to convince themselves of the new functions of the software packaging and virtualization solution RayPack Studio.

All other feature highlights and information about RayPack Studio 6.5 can be found here.

Raynet GmbH is a leading and innovative service and solution provider in information technology and specialized in the architecture, development, implementation and operation of all tasks within Application Lifecycle Management. Raynet's Headquarters is in Paderborn and presently has additional locations throughout Germany, the USA, Poland and UK.

For more than 20 years, Raynet has supported hundreds of customers and partners with its products and solutions for enterprise application management projects worldwide. These include license management, software packaging, software deployment, migrations, client engineering and much more. Additionally, Raynet maintains and cultivates strong partnerships with leading companies in Application Lifecycle Management.

Raynet products and solutions are unique in design and functionality. Their development is highly driven by our customers and partners which is a key reason why our products are always cutting edge. Whether you plan the introduction of a new deployment tool or start a SAM project; whether you plan a packaging factory or a migration - Raynet is the choice for best-of-breed practices in services, products, and solutions for Application Lifecycle Management. Find out more about Raynet under www.raynet.de/en