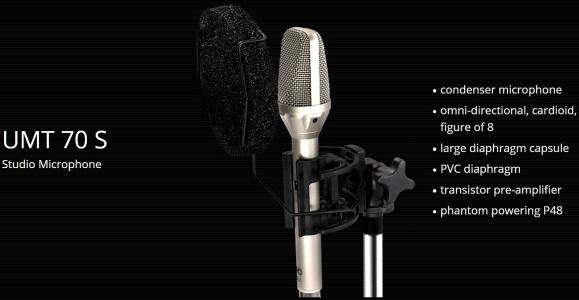 
It ideally combines a long tradition with a state-of-the-art microphone design.

Microtech Gefell`s 90-years of tradition is  the Handing on of Fire, which means especially the continuous development of the best inventions of the founder Georg Neumann.

In 1932, Georg Neumann introduced a transducer with a cardioid polar pattern, the legendary M7 capsule.

It is rightly considered a milestone in mic development, and at the same time, it established what is called the Neumann sound.

In close cooperation between Georg Neumann and his managing director Erich Kühnast, the M 7 continued to be developed even after the move to Gefell in 1943 due to the war.

From the 1960s to the 1980s, Gefell´s studio sector was mainly according to the broadcasting requirements. In close cooperation with the "Rundfunk und Fernsehtechnischen Zentralamt RFZ", under the technical supervision of Jochem Kühnast, Erich Kühnast’s son, a series of new mics with large diaphragm capsules were developed and produced until 1989.

Among them, the Studio mic system SMS 70 with impedance converter MV 690, MV 691 and MV 692 in transistor technology with the capsule modules was developed.

One of the capsules was the UM 70, based on the gold sputtered M7 PVC membrane, which was used in the UM 70 S studio mic since the 70`s.

The UM70 was a high stage of development of interchangeable capsule system, equipped with an M7-based,  large diaphragm capsule and switchable polar pattern.

After the fall of the Berlin Wall, mics from Gefell also became popular in the West. So, for example, in the early 90s, the  UM 70 S, UM 70 or the M 71, called the "Perestroika microphone" came to G–Prime’s/USA (after Sennheiser acquired Neumann Berlin in 1991, the Gotham company morphed into G-Prime and Gotham Service Lab. G–Prime’s primary business was distribution of Microtech Gefell mics).

Famous artists, such as Bruce Springsteen, used it for studio recordings.

So, for example, for a recording of the song "Across The Border", written by Springsteen. The song released on his 1995 album "The Ghost Of Tom Joad" and performed by Springsteen and accompanied by the band consisting of Danny Federici (keyboards), Jim Hanson (bass), Marty Rifkin (pedal steel) and Gary Mallaber (drums)1998 at Sony Music Studios in New York. The song was recorded for the TV-documentary Where It's At : The Rolling Stone State Of The Union, a celebrating special the 30th anniversary of Rolling Stone magazine, first broadcast on ABC (later on MTV and VH-1).

The Gefell UMT 70 S  is the UM 70 capsule, fixed to a newly developed preamplifier with a transformerless output.

The legendary Georg Neumann M7 capsule gives this mic its reputation for its legendary “presence”.

Today Microtech Gefell still produces the M7 capsule in exactly the same way Neumann taught Erich Kühnast in the 1940s, hand making the PVC membrane, and gluing it together by hand, just as Neumann specified. The M7 is currently used in the UM 92.1 S, the UMT 70 S, MT 71 S, CMV 563/ M 7 s and UM 900 mics.

The UMT 70 S M7 condenser mic, equipped with this legendary,  reliable large diaphragm capsule, features outstanding performance, high sensitivity, and improved signal-to-noise ratio. The mic guarantees particularly clean and colourless sound reproduction. It is well suited for instrumental and vocal soloists in radio and television broadcasting and any other kind of accurate production.

The pressure gradient transducer is a dual capacitor design that uses a single brass back plate and two large-diameter gold-plated plastic diaphragms.

A ring at the bottom of the microphone's head grille is used to select the pattern.

The circuit technology also achieves a wider dynamic range by lowering the self-noise floor and increasing the headroom for loud signals.

A 10 dB attenuator has been installed to reduce the sensitivity of the microphone when placed near very loud sound sources. A sensitivity reduction for low frequencies can be utilized to suppress the proximity effect when closemiking with the cardioid or figure 8 patterns.

These outstanding features are appreciated by customers and partners worldwide, so, for example, by the microphone specialist VINTAGE KING/Nashville/USA and its customers: „The Gefell UMT70S is a multi-pattern FET microphone that features the legendary M7 dual-membrane, gold evaporated capsule with a new, state-of-the-art low-noise capsule amplifier for exceptional transient response, wide bandwidth and a natural uncolored sound.

The ultra-slim design benefits the UMT70S with less acoustic field disruption around the microphone and greater placement ease when lose mic-ing instruments.  The UMT 70 S is ideal for recording, broadcast, voice-over and live sound reinforcement.“

Many end user VINTAGE KING application reviews on the UMT70S confirm their satisfaction with the UMT70S , e.g.:

Besides the company offers calibration and services for all manufactured products.