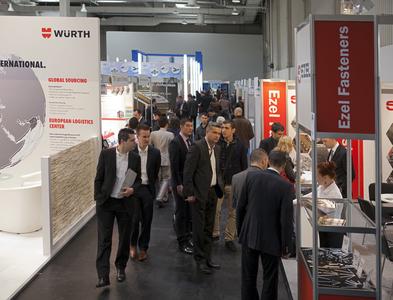 A total of 234 exhibitors from 29 countries put a wide range of industrial fasteners, construction fixings, assembly and installation systems as well as manufacturing technology on display.

Trade visitors came from all over the world to visit Fastener Fair Hannover in order to inform themselves about industry trends and new products. The most important visitor countries after Germany (69% of all visitors) were the Netherlands, Italy, China and Great Britain.

“The new Distributors’ Lounge at Fastener Fair Hannover 2014 was an important meeting place for our trade visitors from all over the world. Trade visitors from different technology fields came together here to make new contacts and exchange ideas,” says David Tellett.

The exhibitor survey shows that the vast majority of exhibitors were satisfied with the overall result of the show. Two thirds of exhibitors rated Fastener Fair Hannover 2014 as good or very good. 89% of exhibitors claimed to have reached their objectives and praised the highly qualified trade audience.

In the coming year, Fastener Fair Stuttgart will once again take place from 10-12th March 2015 at the exhibition grounds in Stuttgart, Germany. The Stuttgart edition of Fastener Fair is the world’s leading trade fair for the fastener and fixing industry and mainly focuses on a traditional trade and manufacturing audience; the show predominantly targets distributors, wholesalers and suppliers.

Further information about the Fastener Fair series of events is available on the website: www.fastenerfair.com.