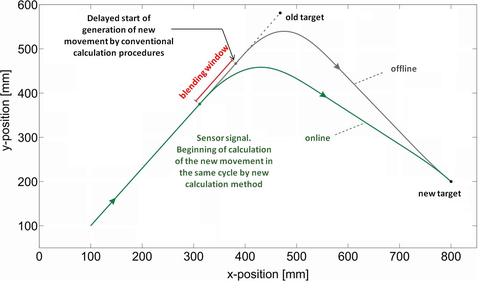 Fast, accurate and above all jerk-limited

KPA Motion for EtherCAT has been designed for users of multi-axes systems requesting prompt reactions to expected, unexpected, or sporadically occurring incidents. In the past, motion sequences have been calculated offline and combined via subsequent transition windows or intervals according to occurring incidents. This is an inflexible procedure delaying the reaction by a couple of control cycles. A more flexible solution regarding the online calculation always failed due to the severe calculation efforts.

Online, within one control cycle, without subsequent transition window

After ten years of research and development by KPA partner Reflexxes GmbH*), users may now calculate a new motion sequence online immediately after occurrences of incidents. Under consideration of the current state and the limits of the drives, KPA Motion calculates a just-in-time, synchronized, and jerk-limited motion online within only one single control cycle.

The immediate execution of the new motion - for example after contacting component work piece surface - allows for a significant improvement in accuracy and speed of drilling, turning, milling, and pressing applications. There is no more need for a reaction-delayed subsequent transition window in between two motion segments which had been calculated offline beforehand. In order to test applications even before a machine is available, programmers simulate machines with V-REP of Coppelia Robotics**). The programming interface is provided by KPA Motion.

"Motion on the Fly"

KPA Motion combines "on the fly" calculations with data transfer ("processing on the fly") via EtherCAT. The result is a "C" library - designed for large set of hardware platforms and vari-ous real-time operating systems like INtime from TenAsys, QNX, and Linux Xenomai.

KPA EtherCAT and KPA Motion at the SPS

The Reflexxes Motion Libraries contain online motion generation algorithms for CNC machines, robot motion controllers as well as single- and multi-axis control systems. Extremely short computations times of a few microseconds for coordinated, synchronized, jerk-limited motion trajectories allow new applications with highly reactive motion characteristics. Major European robotics manufacturers already use this technology. Reflexxes GmbH is a young hightech startup that has been founded as a spin-off of the Institute for Robotics and Process Control at Braunschweig University of Technology.

The robotics simulator V-REP with an integrated development environment is based on a peripheral architecture: Each object/model can be individually controlled via an embedded script, a plugin, a ROS Node, a Remote API or a user-defined solution. This makes V-REP very flexible and extremely suitable for multiple robotics applications. Control systemscan be written in C/C++, Python, Java, Lua, Matlab, or Urbi. V-REP of Coppelia Robotics is successfully used all over the world.

You will find further information on our website at www.koenig-pa.de

EtherCAT® is a registered trademark and patented technology, licensed by Beckhoff Automation GmbH

koenig-pa GmbH (KPA) offers world-wide high-quality automation technologies and integrated solutions. KPA joined the EtherCAT Technology Group (ETG) in 2004. Since then, KPA has been continuously developing and offering in EtherCAT® based software-, hardware, and motion products as well as services for different real-time systems. KPA delivers products and services for the production and testing industries. koenig-pa GmbH (KPA) was founded 1986 in Feucht near Nuremberg as KÖNIG Process Automation GmbH.