Jenoptik maintains good quality of earnings in a challenging environment

"Our business picked up at the end of 2014 following only a moderate development of revenue in the first nine months of the year. Thanks to our cost discipline and the successful implementation of our efficiency programs, we managed to maintain profitability despite a slight fall in revenue. The quality of earnings confirms our conviction: We are on the right strategic course and, in the light of our current business situation, will return to growth in 2015," says Jenoptik President & CEO Michael Mertin.

Up until autumn 2014, the Jenoptik Group's operating business was affected by the unexpected and tangible reluctance to invest shown by customers in the machine construction, automotive and semiconductor equipment markets, and by tightened export restrictions in Germany. On the back of strong revenue in the fourth quarter, however, Jenoptik tipped the upper end of its last communicated guidance. Group revenue in the fourth quarter of 2014 came to approximately 170 million euros, with an EBIT at over 13 million euros.

In the 2014 fiscal year, the Jenoptik Group received new orders totaling around 590 million euros. According to provisional calculations, the order intake was at the same level as revenue and slightly up on the prior year (prior year 575.3 million euros). Expected major orders in the Traffic Solutions and Defense & Civil Systems area have not yet been booked in the order intake of 2014. A major international project for defense technology originally scheduled for 2014 had to be shifted to the 2015 fiscal year due to customer delays. Orders received by Vysionics, the British company acquired in autumn, were included in Group order intake only for the months of November and December.

The order backlog of the Jenoptik Group at year-end 2014 came to over 420 million euros (31/12/2013: 411.4 million euros), thus creating the necessary conditions for the current fiscal year's growth forecast.

Information on the Jenoptik segments.

The Metrology segment was affected by a slow in demand due to the continuing reluctance to invest seen over the year and export restrictions in the area of industrial metrology. There were, however, positive effects from the acquisition of Vysionics, a British traffic safety specialist, in November 2014. At a provisional 185 million euros, the segment's revenue fell marginally in 2014 (prior year 187.4 million euros), but the EBIT, at around 22 million euros, was at the same level as in the prior year (prior year 22.6 million euros).

Revenue in the Defense & Civil Systems segment came to approximately 170 million euros in 2014 (prior year 185.1 million euros). This fall is primarily attributable to tighter armaments export restrictions imposed by the German Federal Government as well as the postponement and extended time frames of projects. The segment's EBIT reduced to around 2 million euros due to only moderate development of revenue, resulting in reduced fixed-cost coverage, and was thus considerably lower than the prior year's 11.6 million euros.

Working capital was built up in the past fiscal year, in part to generate revenue for the months ahead from the order backlog. Together with the Vysionics acquisition, this led to an expected increase in net debt as of December 31, 2014, to around 92 million euros (31/12/2013: 44.1 million euros).

"The good asset position and our financing situation give Jenoptik sufficient room for maneuver in terms of both future organic growth and new acquisitions," says CFO Rüdiger Andreas Günther in summary.

"The outlook for 2015 is bright," says Jenoptik President & CEO Michael Mertin. On the back of a solid order and project pipeline in conjunction with positive run-on effects from the acquisition in the traffic safety sector, the Executive Board is anticipating significant growth in 2015. Group revenue is thus expected to come in at between 650 and 690 million euros in the current fiscal year. Beyond this, outcomes from the continuing Group development projects will positively impact on the quality of earnings. The operating earnings margin (EBIT margin) is expected within the range of 8.5 to 9.5 percent. The Executive Board is forecasting a disproportionate increase in EBITDA (earnings before interest, taxes, depreciation and amortization). This is based on the prerequisite that the political and economic framework conditions will not deteriorate; this includes in particular export restrictions, regulations on the European level; the conflict between Russia and Ukraine as well as further turbulences in the euro zone.

Over the coming years, too, the Jenoptik Group expects to achieve profitable growth. Up to 2018, the Group aims to boost revenue to approximately 800 million euros and to achieve an average EBIT margin of around 9 to 10 percent over the course of the market cycles. Jenoptik will continue to pursue the revenue target on the basis of organic growth and value-adding acquisitions. The share of revenue in the focus regions of America and Asia/Pacific is expected to jointly rise to over 40 percent of Group revenue.

This announcement can contain forward-looking statements that are based on current expectations and certain assumptions of the management of the Jenoptik Group. A variety of known and unknown risks, uncertainties and other factors can cause the actual results, the financial situation, the development or the performance of the company to be materially different from the announced forward-looking statements. Such factors can be, among others, changes in currency exchange rates and interest rates, the introduction of competing products or the change of the business strategy. The company does not assume any obligation to update such forward-looking statements in the light of future developments. 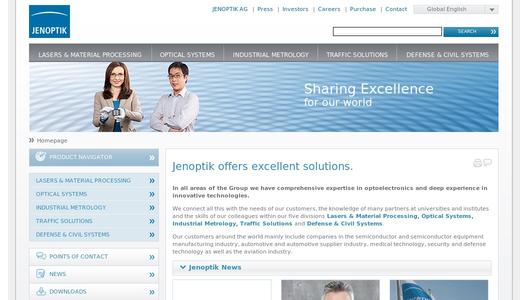 As an integrated photonics group, Jenoptik divides its activities into five divisions: Lasers & Material Processing, Optical Systems, Industrial Metrology, Traffic Solutions and Defense & Civil Systems. Its customers around the world mainly include companies in the semiconductor equipment manufacturing industry, automotive and automotive supplier industry, medical technology, security and defense technology as well as the aviation industry. The Jenoptik Group headquarters are in Jena (Thuringia). In addition to several major sites in Germany Jenoptik is represented in about 80 countries worldwide, for example in the USA, France, Great Britain, the Netherlands and Switzerland as well as in Singapore, India, China, Korea, Japan and Australia. JENOPTIK AG is listed on the Frankfurt Stock Exchange and included in the TecDax index.

Jenoptik remains on path for growth in 2019