Award: iTernity is one of the TOP 100 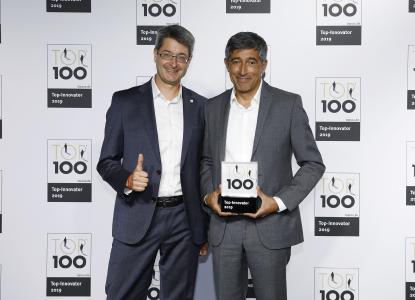 (PresseBox) ( Überlingen/Frankfurt am Main, 01.07.19 )
The innovation leaders in Germany’s SME sector have been announced. For the 26th time, small and medium-sized companies in Germany are being awarded the TOP 100 seal in recognition of their exemplary approach to managing innovation and their track record in bringing innovations to market. Innovation researcher Professor Nikolaus Franke has selected the TOP 100 on the basis of an independent and rigorous analysis. The competition is mentored by science journalist Ranga Yogeshwar, who will be presenting the companies with their awards on 28 June at Frankfurt’s Jahrhunderthalle events venue. iTernity is again among the top 100 medium-sized companies in Germany.

A total of 398 companies applied for a TOP 100 award this time around. The system developed by Professor Nikolaus Franke, coordinator of the TOP 100 project, takes into account the size of the company and ensures that manufacturing firms and businesses in the service sector have an equal chance of winning. Approximately 120 criteria were analysed by Professor Franke and his team (see www.top100-germany.com for further information). After the finalists had been split into three size categories, with a maximum of 100 companies in each, 262 were awarded the accolade.

“Innovation is all about disruption. The TOP 100 companies are constantly coming up with new products, new services, new business models and new processes. If you want to be an innovation leader, you have to consistently align the business as a whole with the innovation goal,” says Franke, commenting on the results.

Ranga Yogeshwar, who has mentored the competition since 2011, summarised the qualities of the TOP 100 as follows: “Openness to new ideas, acceptance of mistakes, a continuous drive to do things differently. These are the hallmarks of a strong culture of innovation – a culture that is firmly established in the SMEs we honour with TOP 100 seal. They are outstanding businesses whose strength in innovation has become part of their DNA. We are talking about far-sighted and hands-on entrepreneurs who put innovation first, each and every day.”

An evaluation of key TOP 100 criteria reveals the extent to which each company’s innovative capacities contribute to its success. The companies are planning to create around 18,000 additional jobs between 2018 and 2020. This is equivalent to a 19 per cent increase in the number of employees. Their recent revenue growth was an average of 24 percentage points above the industry benchmark. They generate 36.4 per cent of their revenue from market innovations or innovative improvements and have registered nearly 2,700 national and international patents in the past three years alone. 65 per cent of the companies are family-run businesses.

iTernity in Freiburg is a leading manufacturer of data management and archiving software. The company has made the leap among the best in the 26th edition of the TOP 100 innovation competition. In the independent selection process, iTernity, with its 40 employees, especially impressed with its innovation success. The top innovator belongs to the German innovation elite for the third time.

iTernity has developed iCAS, an archiving solution that acts as a software layer between the storage infrastructure of a company and its business applications. Thus, it does not matter if the hardware systems or the business applications in the company are changing - archiving will not be affected. The archive system fulfills all legal requirements for data security, encryption and retention periods and is certified accordingly.

Since 1993, compamedia has been awarding the TOP 100 seal of approval to SMEs with a particular ability to innovate and above-average success rates for innovations. Professor Nikolaus Franke has coordinated the project since 2002, He is the founder and director of the Institute for Entrepreneurship and Innovation at the Vienna University of Economics and Business Administration, and has worked as a visiting professor at the Massachusetts Institute of Technology (MIT). He is one of the world’s leading innovation researchers and has won 24 science awards and published over 200 articles. The TOP 100 is mentored by science journalist and television presenter Ranga Yogeshwar and organised in partnership with the Fraunhofer Society for the Promotion of Applied Research and the German Association for Small and Medium-Sized Businesses (BVMW). Media support for the company benchmarking competition is provided by manager magazin, Impulse, and W&V. Further information is available at www.top100-germany.com.

iTernity develops software solutions for the protection and long-term integrity of sensitive data of all kinds. The Software-Defined Archiving approach is the basis for future-proof data storage and legally compliant archiving and enables hardware independence, flexibility, and integrity protection at low cost. The iTernity Compliant Archive Software (iCAS) is a GDPR-compliant archive storage solution. iCAS protects the integrity and availability of critical data and manages retention policies at the storage level. For more information, please visit www.iternity.com

Pressemitteilung Award: iTernity is one of the TOP 100 weiterempfehlen