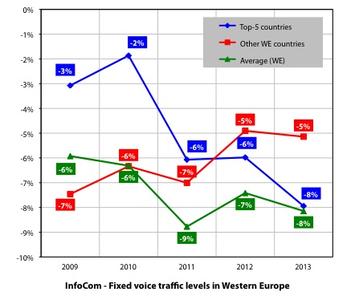 (PresseBox) ( Stuttgart, 07.07.14 )
Stuttgart, Germany — The majority of Western European countries demonstrates a constant erosion of total fixed voice traffic within the past five years, as customers migrate to other communication platforms such as mobile and Internet. Moreover, the rise in VoIP usage, es-pecially in some countries such as France, has not been enough to offset completely the de-cline.

However, in some countries carriers managed to slowdown the decline of or even to increase the fixed voice traffic, primarily thanks to the combined effect of market strategies such as bundling and flat rate offers. In Switzerland, for instance, the growth in fixed voice traffic since 2012 has been generated by the operators’ success in product bundling via aggressive pro-motion, rapid geographic service expansion and value-added features and options. Swisscom, for example, expanded its complimentary services in the entry-level Vivo Casa 1 triple-play package in 2013, especially in the fixed-line, with the introduction of residential un-limited fixed-to-fixed and fixed-to-mobile calls for all Swiss networks round-the-clock, unlike limited to evenings and weekends and to Swisscom networks only. Moreover, Swisscom SME Office 4 and 5 packages were extended with respectively 120 and 480 minutes of free inter-national calls, which was not offered before. As a result, the fixed telephony lines in bundles increased from 0.3m in 2010 to 0.8m in 2013 (+146%).

Additionally, policies on lower fixed and mobile termination rates as enforced by the regula-tors, in adherence to the termination rates set by the EU Commission, also played a role in mitigating the downtrend of the fixed traffic and even produced an encouraging growth in fixed calls, as in the case of Belgium and Portugal. In Belgium, the regulator previously al-lowed alternative operators to charge higher fixed termination rates than the incumbent, yet in 2012 it pushed its decision to normalise the fixed termination rates among all operators at an average of 0.71 eurocents per minute. As a consequence, fixed voice tariffs offered to customers were decreased and this produced a positive 4% growth in traffic in 2012, deviat-ing from the previous declining trend – an average of -3% since 2009.

In Portugal, the traffic trend had been increasing since 2009 yet it experienced 3% drop in 2012 as a negative effect of economic crisis and increasing consumer preference on mobile and Internet services. To partly counter these effects, the regulator implemented a cut of about 80% in fixed termination rates in October 2013. As a result, we can expect a positive impact on customer’s fixed voice tariffs and, as a consequence, an improvement in fixed voice traffic levels.

About this extract: These are some of the results of the most recent release of our Quarterly Fixed Traffic Monitoring service. Competitive pressures, market consolidation, new business models, market volatility, shifting customer demand. All these issues make the tracking of traditional as well as new markets more difficult than ever. Reliable and accurate information is crucial to achieve full market understanding. Our comprehensive service does not end with the delivery. We provide superior support to all products and services, free of charge. If you are interested to know more, do not hesitate to get in contact with us. Talk to us. We listen.

InfoCom is a market research and consultancy company with over 20 years experience providing strategic analyses and planning assistance to stakeholders in the telecommunications, IT and multimedia industries. InfoCom's independent and fact-based analyses highlight trends and opportunities, supporting decision makers to understand market dynamics in order to improve their competitive advantage.

Security issues, multi-screen access and proliferation of enterprise cloud apps fuel demand for Single Sign On (SSO) in the cloud