Off to bed and keep your eyes peeled for space medicine: Imedos technology for retinal vessel analysis is part of the latest bed rest study 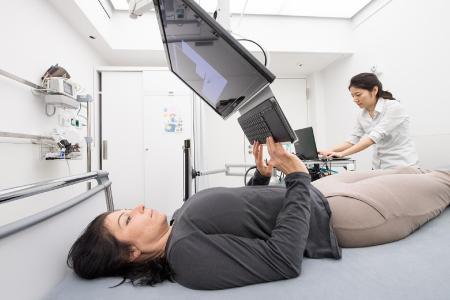 (PresseBox) ( Jena, 21.01.21 )
During space missions, astronauts regularly experience extreme situations that affect their health. In order to better prepare and improve the safety of future expeditions, NASA and the German Aerospace Center (DLR) are currently carrying out a number of bed rest studies to investigate the impact of weightlessness on the human body. The DVA 3.0, an innovative system for dynamic vessel analysis by the Jena-based medical technology manufacturer Imedos Systems GmbH, is also part of these studies to analyse the changes in the eye and the smallest vessels of the body, known as microcirculation.

Specifically developed for dynamic vessel analysis, the DVA 3.0 is a worldwide unique system, which enables the examination of both the function and regulation of vessels in a non-invasive manner. With a simple and painless look into the eye, the retinal vessels are analysed and important information about the quality of blood circulation as well as possible functional disorders and changes are collected.

Space missions are time-consuming – looking at research and preparation – expensive and dangerous for astronauts and their health. In addition to the high psychological strain, the elimination of gravity can lead to a number of physiological changes. For example, there may be a loss of muscle and bone mass, a shift of bodily fluids towards the head ("puffy head, bird-legs" syndrome), limitations of the cardiovascular system, but also changes in the eye and the body’s microcirculation may occur.

In order to make such effects visible and to prevent possible complications, so-called bed rest studies are carried out to simulate a stay in space. During these studies, volunteers spend several weeks lying in bed, which is slightly tilted backwards so that the legs of the test person are positioned higher than their head. In this position, they must eat, sleep, exercise, read and even shower, which will cause their bodies to adapt as if they were in space. The US and German scientists expect important findings for future missions in which astronauts have to survive long periods of time restricted in movement, for example due to staying in a spacecraft. Understanding the effects of living in space as well as related changes in the human body is vital for the preparation of future projects such as sending humans to Mars.

Imedos specializes in retinal microcirculation and develops medical device systems for microvascular research and functional diagnostics. Through decades of research and development, the company has established itself as a highly innovative manufacturer of analytical systems and software. These are used not only by ophthalmologists but also by specialists from other medical disciplines worldwide.

The retina of the eyes acts as a unique mirror of the entire human body. Thus, the retinal microcirculation that takes place here can be used to draw conclusions about the individual vascular condition, vascular functions and vascular risk factors. Early detection of these vascular risks facilitates the prevention of cardio- and cerebrovascular diseases in a targeted manner. This opens up a wide range of applications, far beyond ophthalmology.

Current study: Does the functional analysis of retinal vessels allow statements on the progression of COVID-19?

Pressemitteilung Off to bed and keep your eyes peeled for space medicine: Imedos technology for retinal vessel analysis is part of the latest bed rest study weiterempfehlen