The key to high volume application of high quality recyclates 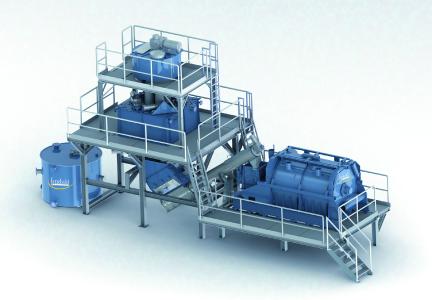 (PresseBox) ( Meckesheim, 11.04.19 )
Plastics can be reasonably seen as being irreplaceable in many areas of day to day life. The challenge is to be able to do something with this universally used material after its first use is behind it. Consumers, manufacturers and politicians are all agreed on this. The motivation for the circular economy is high. The previously deployed solution to plastic recycling problems – sending to landfill, incinerating it or exporting it to far-off countries – is not a solution at all, and is now a thing of the past.

As demand for recycled plastics increases, the quality demands increase alongside it. Quantity and quality must be just right, in order for the recyclate to be used in as many sectors of industry as possible. When planning and constructing recycling systems, Herbold consistently deploys the latest important research findings for optimising cleaning of the materials. The hot washer, which has undergone further development, should be emphasised here. Hand in hand with other measures, this
provides enormously improved recyclate results, representing an important step towards reuse.

Sustainable solutions for large-scale and small-scale users of plastics

Manufacturers of food products and other packaging-intensive goods require large quantities of uniformly reusable plastic granulates/flakes. All these sectors of industry are in the same boat: Because they want to produce sustainably, in order to bolster their image, and therefore require reliable replenishment of useable recyclates in standardised top high quality. Achim Ebel, Herbold’s department head for washing systems, outlines the engineering accomplishments thus: “As a solution to more demanding requirements from industry, Herbold adds customised process steps to existing systems. This enables both the quantity and also cleanliness of the recyclates to be increased efficiently.”

Hot washing represents an important process step for increasing quality. Herbold meets this challenge of producing high recycling quality in large quantities by integrating this process step, which originated in the recycling of PET bottles, into other areas of the plastic recycling process. Initially, this involved pre-washing used PET bottles, at the most. But in the meantime, the procedure is also used for other items, such as thermoformed foils, trays and foil used in the packaging industry, and has also been developed for PO foils. With optimum temperatures, a suitable dwell time and optimum use of additives, Herbold’s hot washing process yields excellent cleaning results.

The clear advantages of hot washing

The end result of the clean flakes speaks for itself: Fatty impurities from remnants of for example body lotion, cooking oil or suncream are dissolved and washed away, as are residues from labels and their adhesives. This clean flake material has reduced odour, is clear and does not yellow. Just how clean the material is demonstrated by the melt filter in the extrusion system. Whereas the industry standard for filtering out foreign particles in the melt filtration process is 80–110μm (micrometres), hot washed flake material achieves just 40μm. The origin of the material to be recycled – discarded items from normal domestic waste – is no longer detectable in the end result.

Different types of waste present different demands of the preparation stages. When quality is the main focus, Herbold’s customers rely on the hot washing system’s recommended process integration, in a discontinuous process. The reason for this is the recyclate’s
important and more controllable dwell time in separate tanks with agitators. If using multiple tanks in alternating operation, the process step becomes more or less continuous, and can be integrated into continuously running machinery.

Other parameters at a glance

In PET recycling, the improvements to the recyclate and the resulting large-scale industrial quantities deriving from the hot washing system form a crucial upstream stage in the production of food-safe material for preforms or thermoformed foils. “We are also monitoring other opportunities to improve quality in plastics recycling. As well as optimal integration of hot washing systems, we also offer solutions for water treatment as well as for reducing operational costs. Herbold sees itself as a part of the chain of process steps for optimising plastics recycling. Working together with specialist manufacturers for upstream or downstream process steps plays a pioneering role in the improvement of quality,” explains Werner Herbold, providing a glimpse of the sustainable manner in which the recycling process is viewed. Herbold Meckesheim GmbH is a recycling specialist for the plastics industry. The company's machinery helps reduce and reuse plastic waste worldwide. Herbold's machines are in use all over the world. They treat the 'clean' waste from the plastics processing industry, as well as used, mixed and contaminated plastics. The machines are used for pulverising plastic granulates and waste, as well as in countless other applications in waste treatment, raw materials recovery and material preparation for a range of industrial processes. Today, Herbold is managed in the fourth generation by Karlheinz and Werner, and develops and tests its systems in its own technology centre. More than 150 employees in Meckesheim, along with employees of the company's international agents, take care of the custom-made machines in accordance with customers' stated requirements, from the planning stage via commissioning and through to the end of the machines' operational life. www.herbold.com