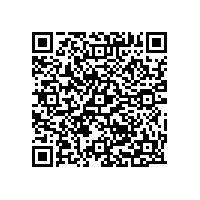 Black plastics are not detectable with conventional separation processes. Hamos developed a process with which sorting of black plastic from different applications into pure single material has been achieved.

Large amounts of mixed plastics arise during recycling of household refuse and electronic waste, automotive vehicles, etc. High-grade black plastics in particular cause problems in subsequent sorting, aimed at obtaining clean, reusable and pure fractions of single types of plastic. They are not detectable with conventional separation processes, so that the purity of the separated products is low, due to a lack of suitable separation processes.

Black is a trendy and modern colour and is therefore used as the plastic surface of many pieces of technical equipment such as telephones and laptops. Furthermore, many plastic parts are made only in black colour material for cost reasons. The “coloured surface” is then produced by painting or metallization. Bumpers for cars are, for example, produced exclusively in black or dark grey colour. Matching to the applicable body colour then takes place by painting in the desired colour. Part colour hardly plays an aesthetic role however with examples such as photocopiers, computers, but also with functional parts in automotive engineering, such as for ventilation. For this reason, the latter are usually produced in black colour. This makes production and storage easier – but makes recycling more difficult.

So in, e.g. recycling of electrical and electronic equipment, large amounts of high grade engineering plastics such as ABS, PS, etc. arise, of which approximately 50 – 70% are thorough-coloured black. The share of black particles within the plastic fraction is also very high in recycling of automotive vehicles. Hamos, today one of the worldwide leading companies in the area of electrostatic separation technology, has developed a process with which sorting of black plastic from different applications into pure single material has been achieved.

Different processes are commonly used to sort coloured plastics. Mixtures of plastics from domestic refuse (such as post-consumer packaging waste, as obtained in Germany from the DSD Duales System Deutschland yellow bags or wheelie bins) are mostly separated into single fractions in sorting plants, mostly with the aid of fully automatic sorting equipment. The camera systems utilised here use so-called NIR Near InfraRed technology, with which the near infrared spectrum reflected by the plastics is evaluated. Each type of plastic has here its own characteristic spectrum, which serves to identify the material. The problem with this is however that as black plastics do not reflect the radiation, no spectrum can be recognised – they cannot therefore be sorted this way.

Work is presently being conducted intensively on new optical sorting processes with which the mentioned drawbacks should be eliminated. But one is confronted here with the limits of physics. In addition to this, the plastic parts available are mainly in small pieces, due to the preceding mechanical treatment, having to some extent particle size < 50 mm. On top of this, there is severe surface contamination caused by painting, as well as adhered organic or inorganic soiling. This has the consequence that there is presently no practical optical sorting equipment for plastic identification available in the market. A number of sorting systems, each following another, are required in order to obtain clean fractions from a mixed plastics material stream.

Black plastics can be easily separated with separators working on the basis of electrostatics, as this equipment works irrespective of the colour of a product. Electrostatic separators use here the effect that mixed plastics take on different electrical charges, positive or negative, depending on the type of plastic. With a mixture of PA and ABS, for example, the PS takes on a negative charge, the ABS a positive charge. Charged differently in this way, the particles are subsequently separated by an electrode system. The voltage used amounts to approx. 35,000 Volt. Positively charged ABS is attracted to a negative electrode, negatively charged PS to a positive electrode. Purity of individual plastic fractions can be optimised by using a separation sheet. Depending on the composition of the plastics, either a single or two-stage separation process is useful.

Separators working on the electrostatic principle are used with great success in recycling of window profile off-cuts (separation of rubber from PVC), beverage bottles (separation of PVC from PET), electronic waste (separation of PS and ABS) and in many other applications. Typical throughput rates for a plastic separator amount to approx. 750 – 1,200 kg/h. Higher throughput rates can be easily realised by combination of a number of single pieces of equipment operating in parallel to each other, so that also large material amounts of several tonnes per hour can be separated.

But as only dry plastics can be electrostatically charged, a drying stage has to be brought into use beforehand. Mechanical shredding in cutting mills (granulators) or similar equipment is however often adequate in order to achieve sufficiently successful separation.

Typical electronic waste (excluding televisions and monitors) consists of a predominant share of metals. But an average of approx. 15 % arises however as mixed plastics. With the large quantities of equipment recycled in Germany, this amounts to finally several 100,000 t of plastics. Mixed plastics from electronic waste consist of many different types of plastics, which arise in different amounts. If the “undesired plastics” (e.g. flame retardant plastics, PVC) are taken out of the equation, a good product share of approx. 55% is obtained. Practice has shown that this “good fraction” consists of approximately 70% of black plastics.

A combination of dry and wet separation processes is used for processing mixed plastics from electronic waste. Undesired foils, fibres, dust, etc. are first separated by sieving and air classification. A PS/ABS concentrate and a polyolefin fraction are then recovered by swim/sink separation in fluids of different density.

The mixture of PS and ABS is “selectively dried” in a subsequent shredding process from e.g. 30 to 40mm particles down to a particle size of < 10 mm. This means that the large amount of wood present in electronic waste remains moist, while the plastic on the surface is already dry. It is thereby possible to separate the troublesome wood fraction and other conductive products with the “corona roll separator” type of electrostatic separator.

Highly concentrated PS and ABS fractions with purity above 98.5% are produced in the subsequent electrostatic plastic-from-plastic separation process. This separation takes place irrespective of the colour of the plastic. Black through-coloured constituents play no role here. An additional effect of this separation stage is that filled polypropylene, which has the same specific weight of approx. 1.05 kg/dm³ as for PS and ABS, can be separated as a separate fraction. Electrostatic separators for ABS/PS separation are used by different companies with great success for separation of mixed plastics from electronic waste .

Up to 20 % waste arises just in production of cockpits and instrument panels for automotive vehicles. It involves primarily highly rigid solid construction materials such as, for example, glass fibre reinforced SMA clad with PU foam and an “outer skin” of, e.g. PVC or PU. SMA in particular is a very high-grade and expensive plastic, which should be recycled even if only for reasons of economy, so that this valuable plastic is not lost. The problem here is however that, in most cases all of the three plastics, SMA, PU foam and outer skin, are through-coloured black.

The production waste is shredded and ground in a cutting mill (granulator). The PU is almost entirely separated in the mill (granulator) and can be subsequently completely separated by air classification. The mixture of black SMA with black PVC is then separated. The achievable purity of the SMA amounts here to more than 99.5 %. This purity is so high that this product can be processed directly again into new dashboards. Also the flexible (plasticized) PVC can be easily processed into new products, on account of its high purity.

Ventilation and air conditioning parts in cars that are not directly in view of the passengers are produced almost 100% in black plastics. Different engineering plastics are used, depending on the function. Composite materials are also often used, such as for example a two-component ventilation flap in glass fibre reinforced PP, onto which an elastic sealing strip in TPU or EPDM has been injection moulded. When recycling production waste, the contamination brought about by the presence of the rubber strip gives rise to large problems and prevents the recyclate from being capable of being used again.

When the materials are shredded in a cutting mill (granulator), the rubber strip is almost entirely released through friction within the mill. Dust is then removed from the ground material and it is subsequently separated electrostatically. A highly concentrated PP fraction is obtained. The black colour of both the functional part, as well as its EPDM seal, plays no role here.

Virgin plastics are repeatedly mixed with other plastics, with lack of attention leading to pure but different types of plastics of the same colour becoming mixed together. The resulting mixture of several components of the same colour can mostly not be processed, as the plastics are invariably not compatible with each other. The mixed plastics are charged in an electrostatic separator and thereafter separated into pure single products. The materials recovered from such faulty lots are so clean after separation that they can be easily processed in production as virgin materials.

Plastic window profiles consist of rigid (unplasticised) PVC. Seals in rubber or flexible PVC are used to seal both the glass glazing to the window frame profile, as well as to seal off the complete window wings, and are mainly in black or dark grey colour. As the window profile is often also in dark PVC, clean separation of the undesired rubber seals is problematic. Rigid PVC from window profiles is an ideal thermoplastic material that can be easily reworked into new profiles – as long as the material is free of rubber. As is known, rubber is a crosslinked (thermosetting) material that does not melt in extruders and so this makes it impossible to use such contaminated PVC waste.

Window profile off-cuts are ground and dust removed from the regrind. The rubber and flexible PVC seals are than separated fully automatically by electrostatic separation. The highest possible purity obtained with the PVC fraction enables it to be processed into the inner core layer of new multilayer window profiles. As a complete line for processing waste PVC window profiles separates mainly white profiles, downline colour sorting equipment is used after electrostatic separation, so that the achievable purity in the ready processed PVC amounts to more than 99.99%.

Empty toner cartridges from photocopiers or fax equipment arise in huge quantities. They are partially taken back by the producers and recycled. They consist of largely different black plastics with or without flame retardants, sealing foam, silicone rubber strips and much more. As the valuable plastics should be used again in production of new toner cassettes, separation of “foreign plastics” and in particular, separation of seal materials, rubber, etc. is absolutely essential.

After going through different initial process stages, a black regrind material is obtained that has a high degree of contamination by foreign plastics and rubber. The mainly black rubber fraction is conductive and can be separated with the aid of the corona-roll type conductive/non-conductive separators. Other foreign plastics that may possibly still be present are separated in a further tribo-electric separation stage.
The result is a clean plastic that can be easily used again in production of new toner cartridges.

He studied mechanical engineering at the University of Stuttgart and work afterwards for a several years for Fraunhofer Gesellschaft, where he received his engineering doctorate.

He acquired hamos GmbH in 1987. The first KWS electrostatic metal separator was sold by hamos in 1992. hamos was able to present the first electrostatic separator for separation of black plastics in 2001.

hamos is today one of the worldwide leading companies in the area of electrostatic separation technology. 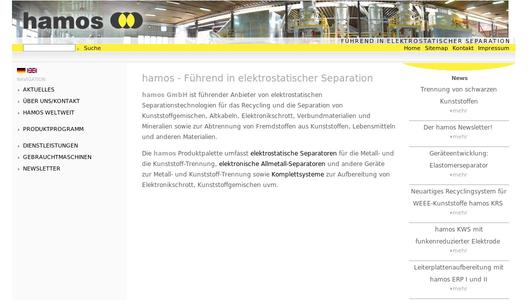