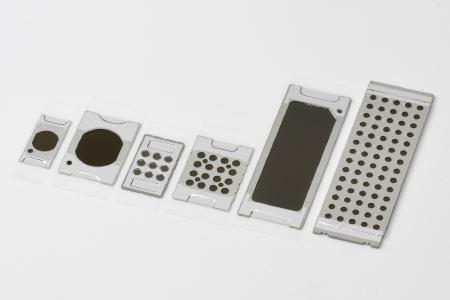 (PresseBox) ( Herrsching am Ammersee, 22.10.20 )
Hamamatsu Photonics have added 4 new products to our "DIUTHAME (Desorption Ionization Using Through Hole Alumina MEmbrane)" series ionization-assisting substrates, that drastically cut the pretreatment time needed to ionize samples by laser in mass spectrometry. These new products include a miniature type, ideal for mass spectrometry imaging of small samples and a glass-slide size type for mass spectrum measurement that can be directly set into spectrometer holders. Our expanded lineup for the DIUTHAME series now includes a total of 9 types, allowing users to select the DIUTHAME that best matches the size of samples to measure with a MALDI-TOF MS that works by a combination of MALDI(*1) and TOF MS(*2) techniques. Sales of these new products will begin on October 20, 2020, mainly for researchers at domestic and overseas business organizations and universities who use MALDI-TOF MS in various fields such as drug discovery, biochemistry, food industry, and cosmetics.

*1: MALDI or matrix-assisted laser desorption/ionization is a major ionization technique used in mass spectrometry, in which a sample is pre-mixed with low-molecular-weight organic compound (called a matrix) and ionized by laser irradiation.

*2: TOF MS or time-of-flight mass spectrometry is a technique that determines the mass of atoms and molecules by measuring the time-of-flight of the ions.

A brief look at mass spectrometry

Mass spectrometry is a high-precision analytical technique for determining the type and quantity of atoms and molecules contained in a sample, and their molecular structures. The operation principle of Mass spectrometry is that the atoms and molecules in the sample are ionized by several ionization methods such as an electron beam or laser, and then the mass of each ion is measured. Analysis results are obtained as mass spectrum data that shows the mass-to-charge ratio on the horizontal axis and the ion signal intensity on the vertical axis. Another major analytical technique called 'mass spectrometry imaging', visualizes the spatial distribution of molecules while simultaneously obtaining a mass spectrum.

DIUTHAME is an ionization-assisting substrate consisting of extremely fine through-holes of about 200 nanometers (1 nanometer equals one billionth of a meter) in diameter developed for MALDI-TOF MS.

In mass spectrometry imaging using MALDI, a pretreatment time of roughly 30 minutes is usually required to select and prepare a matrix, apply it to the sliced sample, and wait until it dries. These problems show the need for a different ionization technique not requiring any matrix. We developed DIUTHAME for quick and easy pretreatment that only takes approximately 3 minutes after just placing it on a sliced sample. DIUTHAME also eliminates noise generated from the matrix and delivers high-quality mass spectrometry images with high measurement reproducibility. Our first DIUTHAME product was put on the market in 2018.

Since the release of our first DIUTHAME product, we have been developing other types of DIUTHAME substrates to respond to customer needs. For example, we provide types with a larger effective area optimized for mass spectrometry imaging dealing with large samples and also types compatible with the blotting technique(*3) often used with mass spectrometry imaging when it is difficult to slice samples into thin sections.

To meet current market needs, we have now added a new product to our DIUTHAME lineup that has an effective area optimized for measuring small samples by mass spectrometry imaging such as foreign matter contained in plant tissues or industrial materials. At the same time, we are also releasing a same-size product compatible with blotting. Moreover, our new lineup includes a 16-channel type that simultaneously measures more samples compared to the currently available 9-channel type, as well as a glass-slide size 70-channel type for mass spectrum measurement.

Adding these 4 new products to the DIUTHAME series expands our current lineup to a total of 9 product types that allow users to select the DIUTHAME that best matches their sample sizes in mass spectrometry imaging using MALDI-TOF MS. Our DIUTHAME lineup also allows simultaneous mass spectrum measurements of many samples to help streamline the R&D process and lower the analysis cost.

We will continue to develop more and more novel products in response to market needs.

*3: Blotting is a technique for transferring the components of a sample onto another object.

MALDI mass spectrometry imaging requires a pretreatment process that takes about 30 minutes to select and prepare an optimal matrix for the sample, apply it to the sample, and wait until it dries. It is also difficult to uniformly apply a matrix to the sample with an air brush, posing the problem of poor measurement result reproducibility. Devices for uniformly applying a matrix are also available but these are expensive and this task is usually carried out by hand. DIUTHAME, however, offers easy and quick pretreatment that takes approximately 3 minutes after just placing it on a sample. It also eliminates variations in measurement results that may occur depending on the worker's skill level.

3. DIUTHAME substrate can be used with the blotting technique to expand applications of mass spectrometry imaging