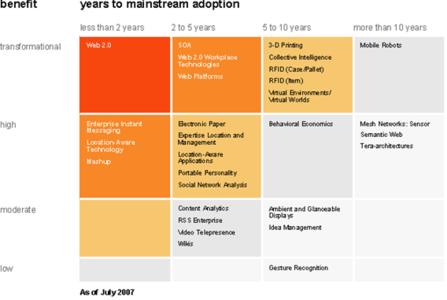 (PresseBox) ( München, 06.08.07 )
Major themes in Gartner’s hype-cycle report, Hype Cycle for Emerging Technologies, 2007, include Web 2.0 innovations, the commercialisation of user interaction techniques and mobile technologies and applications. Of the 36 key emerging technologies examined in this year’s hype cycle, ten have been designated as having a transformational business impact and should be strongly considered for adoption by technology planners in the next ten years.

“Web 2.0 continues to be a major area of activity in the enterprise this year. We will see companies steadily gain more experience and success with Web 2.0,” said Jackie Fenn, Gartner research fellow. “We are also seeing radical user interface innovations, such as gesture recognition, from major vendors like Nintendo and Microsoft, while mobile technologies and location services remain a staple topic for evaluation within emerging technology roles.”

The three key technology themes identified by Gartner are:

• Web 2.0: The community, technology and business innovations of the web continue to evolve. Specific approaches and technologies have progressed since last year's edition, including wikis, mashups, enterprise RSS, social network analysis and collective intelligence. The product and platform underpinnings have been more tightly defined in the 2007 hype cycle, with entries for web platforms and Web 2.0 workplace technologies.

• User Interfaces: After many years of stagnation, a number of emerging user interface technologies are entering serious commercialisation, including electronic paper (for mobile devices and signage), gesture recognition (as incorporated in the Nintendo Wii and Microsoft Surface) and virtual environments/virtual worlds (such as Second Life). Other interface technologies, such as ambient and glanceable displays, are still being used experimentally to establish their role and utility.

• Mobile: Mobile and wireless technologies, devices, and services continue to be an active area for emerging technology groups. Areas such as RFID, sensor networks, and location-aware technologies and applications continue to mature slowly, but still offer both near-term and long-term promise as high-impact technologies.

Jackie Fenn has been authoring the hype cycle for emerging technologies for 12 years. She said: “The hype cycle should be used along with a planning model such as the priority matrix [see below], which highlights the technologies we believe are worth adopting early because of their potentially high impact. However the actual benefit will vary significantly across industries so planners need to ascertain which of these individual opportunities relate most closely to their organisational requirements.”

Ms Fenn explained that although this year’s hype cycle includes a number of newcomers, it does not necessarily follow that they are new technologies; rather it is how those technologies are being applied that will lead to real innovation and business impact. “The technology for 3-D printing has been around for two decades but its appeal and business impact were limited to the field of rapid prototyping for industrial design,” she added. “In recent years printer costs have come down while printing capabilities have increased, broadening the appeal of 3-D printing. We predict that this will cause the market to expand to on-demand and on-site printing of models and spare parts, as well as the hobbyist and consumer markets, where the technology might be used to create models of avatars or even children and pets.

Behavioural economics also makes its debut on this year’s hype cycle. This established academic discipline aims to understand how people actually make decisions instead of assuming ‘rational behaviour’. Although it originated in the context of financial markets it is now applied more broadly to understanding customer motivations and decision making and is consequently beginning to enter the radar screen of leading-edge enterprises. According to Ms Fenn, “An understanding of behavioural economics has the potential to dramatically improve product and service design, e-commerce business models, sales and marketing effect, website design and the general quality of management decision making. For this reason, we have included it in this year’s hype cycle and are predicting that it will have a high business impact in the next five to ten years.”