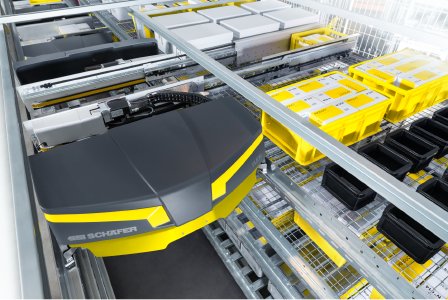 (PresseBox) ( Neunkirchen / Siegerland, 25.08.21 )
The supermarket chain tegut... based in Fulda, Germany, has commissioned SSI Schaefer to build a new logistics center in Hünfeld-Michelsrombach, Hesse, Germany. With approximately 290 supermarkets in Hesse, Thuringia and Bavaria as well as in Göttingen, Mainz, Stuttgart and Ludwigsburg, tegut... is becoming more and more popular and is on a path of steady growth. The new distribution center will be built in the logistics park “Hessisches Kegelspiel (Hessian Skittles)” in the heart of the tegut… trading area, with a perfect connection to the A7 motorway. From there, the increasing number of tegut… supermarkets can be supplied efficiently and reliably thanks to the intralogistics automation technology by SSI Schaefer. tegut…’s product range, which has been expanded over the years, will be accommodated in the new logistics center with a footprint of 90,000 m². Capacity for future growth has also been considered. In the future, around 17,000 products will be stocked, handled and made available for shipping at up to 130 shipping gates.

SSI Schaefer will construct an 8-aisle automated high bay warehouse to accommodate approx. 38,000 Euro pallets for tegut... The rack layout is based on the product range of tegut… with regard to storage capacity and performance, and is divided into single and double-deep racks. tegut... focuses on sustainability and for this reason, the energy-efficient SSI Exyz storage-retrieval machines will be deployed. If required, individual aisles can be switched off.

The automated miniload system has a storage capacity of 85,000 bins. The system will have 15 lifts and 130 SSI Flexi shuttles responsible for picking in five aisles and on 26 levels. The SSI Schaefer scope of delivery also includes 73,000 storage bins to store products in the shuttle warehouse. These bins are used to transport the items to and from the picking locations.

A corresponding conveying system for large and small load carriers connects the automatic storage areas to the seven picking work stations with state-of-the-art ergonomic standards. In order to ensure that processes in the logistics center run smoothly and efficiently, WAMAS® logistics software is used. The system layout already considers future growth so that extensions of the high bay warehouse, shuttle warehouse and work stations are possible at a later date.

Building construction will start in summer 2021 and go-live is scheduled for 2023.

The SSI Schaefer Group is the world's leading provider of modular warehousing and logistics solutions. With headquarters located in Neunkirchen (Germany), SSI Schaefer employs approximately 10,500 associates globally, along with seven domestic and international production sites, and approximately 70 worldwide operating subsidiaries. Across six continents, SSI Schaefer develops and implements innovative industry-specific answers to its customers' unique challenges. As a result, it plays a key role in shaping the future of materials handling.

SSI Schaefer designs, develops and manufactures systems for warehouses and industrial plants. Its portfolio includes manual and automated solutions for warehousing, conveying, picking and sorting, plus technologies for waste management and recycling. In addition, SSI Schaefer is now a leading provider of modular, regularly updated software for in-house material flows. Its IT team, with a headcount in excess of 1,100, develops high-performance applications, and provides customers with in-depth advice on the intelligent combination of software with intralogistics equipment. The SSI Schaefer IT offering, including its own WAMAS® and SAP products, delivers seamless support for all warehouse and material flow management processes. Solutions from SSI Schaefer improve the productivity and efficiency of customer organizations - not least through the highly precise monitoring, visualization, and analysis of operational metrics for proactive intralogistics management.

SSI Schaefer offers highly sophisticated, turnkey systems. As an international player, it can deliver one-stop solutions to all four corners of the earth. Its comprehensive portfolio encompasses design, planning, consulting, and customer-specific aftersales services and maintenance.

The Supreme Discipline of E-Commerce: Intralogistics Solutions for Food Retail