On show at LogiMAT 2013 - The future of intralogistics

(PresseBox) ( Munich, 19.02.13 )
Intralogistics is facing sustained and radical change. The range of exhibitors at LogiMAT 2013 shows the trends shaping the future of the industry and the products and solutions manufacturers in the various segments of the industry are offering to meet the demands in intralogistics.

For the highly diverse industry of intralogistics, LogiMAT, the International Trade Fair for Distribution, Materials Handling and Information Flow, has established itself as "the most important logistics trade fair in Germany" (Bertram Salzinger, Chairman of inconso AG). As a "marketplace for information and products covering the world of intralogistics from which operators, manufacturers and service providers derive equal benefit" (Christian Baerwolff, Director of STILL Marketing), for exhibitors it is "one of the leading logistics trade fairs in the world" (Matthias Kramm, CEO of Vanderlande Industries GmbH).

"I see this positive feedback from the industry as a compliment to the organisation and the concept of LogiMAT," explains Exhibition Director Peter Kazander. "I would really like to combine this with a very personal thank you to the Stuttgart Exhibition Centre, which actively assists us with all our needs, and to the many helpers who, over the years and with their enormous commitment, have contributed behind the scenes of the event to the success and extraordinary growth of LogiMAT. Without them, it would be impossible to achieve the ongoing success of LogiMAT in this form."

Particularly in the last few years, said Kazander, it had been necessary to put a great deal of effort into organisation to maintain the balance between the continuous growth of LogiMAT and its reputation as an efficient, compact forum for doing business. This year, more than 1,000 international exhibitors, among them over 130 exhibiting for the first time, will be present in Stuttgart. In terms of exhibition space alone, by filling six halls in the north and south wings of the Exhibition Centre for the first time - a total of 74,000 square metres of exhibition space - LogiMAT 2013 has posted an increase of 16.5 percent compared with the record year of 2012. "Under the slogan 'Intralogistics - direct. Market place for innovations', the 11th International Trade Fair for Distribution, Materials Handling and Information Flow is again setting new standards right at the start of the 2013 exhibition year," says Kazander contentedly. "At the same time, the products and solutions being presented by the exhibitors in Stuttgart reflect current trends in the individual segments of intralogistics. They demonstrate that intralogistics is facing sustained and radical change - within the industry and among users."

According to the Exhibition Director's analysis, this change is being characterised by an increasing consolidation across all segments of the range of products and services offered. Whereas, for example, the manufacturers of ground conveyors with driverless transport systems (DTS) and shuttle solutions were extending their product and service offering ever deeper into the area of conventional storage and materials handling technology, the materials handling technology manufacturers, alongside new developments in the area of dynamic order picking and automation systems, were focusing on new business areas in the segment of information technology. "The materials handling technology manufacturers are also positioning themselves with increasing frequency as software suppliers and partners in the implementation of SAP solutions for warehousing", explains Kazander. "They are offering their customers their own storage management systems and tailored individual versions of SAP-based storage software, so-called customising. In many cases, with their own special applications, they are thus deepening the range of functions and the depth of application of the standard software." Alongside this, the pure software suppliers would be concentrating increasingly heavily on the development of IT solutions to increase the flexibility and competitiveness of users, on the widest variety of levels and with a focus on the broadest range of issues. "In functional terms, the main emphasis is on reducing throughput times, decreasing stocks and increasing delivery reliability," according to Kazander. "Strategically, the developments are aimed at the inclusion of prospective ratios for comprehensive cost control, in order to open up further optimisation potential and generate sustainable and resilient scenarios for strategic network planning."

On the product side too, as shown by the solutions being presented at LogiMAT, in all segments the conventional system boundaries have been overcome, he continued. These range from the increasing number of offerings in the area of multisite-capable, cross-site software functionalities and systems, cloud solutions and mobile warehousing in the IT segment, via the increasing automation of intralogistic goods transport using new shuttle and DTS systems moving freely in the warehouse being shown both by the forklift truck and materials handling technology manufacturers, through to the networking of forklift truck and storage technology equipment with the production and logistics processes and the data streams associated with them.

Kazander sees as the driver of these developments the increasing globalisation of procurement and distribution networks and the growing e-commerce market. "According to a BDD [Federal Direct Marketing Association of Germany] study, online business is now the most important purchasing channel for virtually all everyday products," says the Exhibition Director. "The continuing boom in e-commerce, with a market volume in 2012 of 25.4 billion euros and 12 percent growth in Germany alone compared with the previous year, demands flexibly scaleable solutions for the storage processes behind the online shop. In parallel with this, companies operating on an international level in particular are endeavouring to optimise their logistics networks and control them in an integrated way. With their products and new developments, as demonstrated by the innovations of exhibitors on show at LogiMAT 2013, the software suppliers as well as the manufacturers of materials handling, storage and ground conveyor technology are meeting the relevant challenges to intralogistics and network design."

Accordingly, the main emphasis in the three halls in the north wing of the Exhibition Centre occupied during LogiMAT this year - Halls 1, 3 and 5 - is on materials handling technology, its control and the IT systems overlying it. Whereas the exhibitors of materials handling technology in Halls 1 and 3 are presenting intelligent, ergonomically mature order-picking solutions for high throughputs and fatigue-proof working following the "product to person" principle, in Hall 5 the software suppliers - from industry leader SAP through to the software divisions of the materials handling technology manufacturers - are demonstrating the current approaches with which potential for optimisation in terms of resource efficiency is being opened up, for instance through the linking of systems and equipment from the area of information technology with those from communications technology. "If you are seeking the hardware components for efficient material flows, you can take a close look at the innovations the industry has to offer in Halls 1 and 3 at the Stuttgart Exhibition Centre," says Kazander. "If you are interested in the software solutions of these manufacturers, you can compare their offerings in Hall 5 directly with the products of the software developers."

The dynamic in Halls 4, 6 and 8 opposite is characterised by automation systems for labelling and packaging and by innovations in loading and ground conveyor technology. "The market segment, in which every year alone around 960,000 forklift trucks are ordered from manufacturers worldwide, is characterised by a high degree of competitive pressure," explains Kazander. "With its range of exhibitors, LogiMAT 2013 reflects the forklift truck market almost entirely - thus offering trade visitors a high degree of transparency for comparing and selecting the right ground conveyors."

A particular focus for exhibitors and trade visitors: alternative energy storage. With increasing frequency, manufacturers and users are putting their faith in the new lithium-ion technology. The advantage of lithium-ion storage batteries compared with traditional lead-acid batteries: they are one hundred percent maintenance-free, can be boost-charged and interim-charged in a few minutes, produce no waste gases and offer significantly longer life expectancy. Above all, however, they exhibit 15 percent higher energy availability and approximately 20 percent higher system efficiency. At the same time, lithium-ion storage batteries have a considerably lower battery volume and only around a tenth of the weight of traditional, lead-acid storage batteries weighing around 150 kilograms. "Especially when it comes to storage technology equipment, as proven by exhibitors' products on show at LogiMAT 2013, the new energy storage technology is being used increasingly often," says Kazander. "Manufacturers as well as users are focusing on resource efficiency."

The Exhibition Director sees a further product focus at LogiMAT 2013 in the significantly increased presence of manufacturers of driverless transport systems (DTS). "Currently this technology, which has already been in use in Germany for more than 50 years, is manifestly experiencing a renaissance in intralogistics, under the name of automated guided vehicles (AGV)," is Kazander's verdict. "At LogiMAT 2013, fifteen well-known manufacturers, i.e. a reflection of the entire industry segment, will be showing the latest options these systems offer users."

In the 70s and 80s of the last century an initial major surge in demand for DTS was triggered by the car industry. After this, the equipment fell somewhat into oblivion in intralogistics. Supported by the rapid changes in communications technologies and in sensor, safety and information technology, since then the opportunities for implementing and using DTS have increased considerably - while system prices have been progressively falling. "Now these automatically controlled assistants are taking on a multitude of common forklift truck functions," says Kazander. "With their attractive cost-performance ratio, as demonstrated by the equipment on show at LogiMAT 2013, DTS have also become economically appealing for applications in small to medium-sized businesses."

In addition to being the industry's trade fair, the concept behind LogiMAT involves an interesting accompanying programme involving a comprehensive range of information offerings. Besides a wealth of exhibitor presentations and four live events, this year around 90 top-class speakers from business, science and international trade media will be discussing current topics from the world of intralogistics, presenting solutions and deriving guidelines for action across six forum areas and in 24 presentation blocks.

As shown by the above examples, LogiMAT 2013 is in equal measure a reflection of economic development and a barometer of trends, a contact medium for creating new networks and a forum for exchanging information at conference level - on an interdisciplinary as well as an international basis. "At the same time we are particularly proud that, despite the striking growth, with the new hall layout we have been able to preserve the concept of LogiMAT, i.e. that of offering an efficient, compact forum for doing business," sums up Kazander. "LogiMAT shows what is moving the industry and what will be shaping the future of intralogistics." 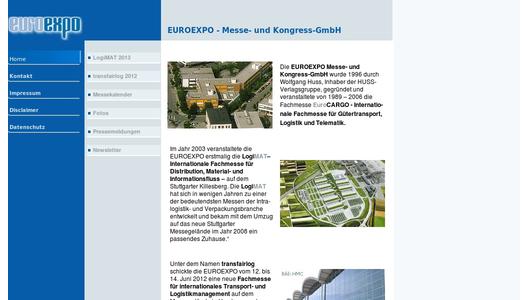 Pressemitteilung On show at LogiMAT 2013 - The future of intralogistics weiterempfehlen