Plug-and-play for the world of agriculture

(PresseBox) ( Friedberg, 19.02.20 )
Simpler, faster, more efficient—that’s how experts get to the heart of a matter. The ISOBUS standard is a big thing. But it would be even bigger if more manufacturers jumped on board with it. After all, it isn’t just farmers who benefit from it—the environment does, too. This is the credo of many users.

Modern agriculture has a growing number of electronic and digitized functions in all machine components, from accessory equipment to towing vehicles, and all of them are generating data streams—which creates a need for uniform standards and interfaces. In particular, the changeover times for connecting tractors to other accessory equipment—seed spreaders, fertilizer spreaders, bale trailers, or baling presses—pose problems for machine operators. A different cable, various plugs, a new terminal: Proprietary isolated solutions make for annoying and inefficient downtime on the farm.

What has long been in effect for peripheral devices on the PC or laptop—namely plug-and-play together with compatible interfaces—is also making vital advances in agricultural processes in the age of precision farming. It makes daily operations simpler, minimizes changeover times, and so ensures a bona fide increase in efficiency. Precise seed placement on headlands or the geo-referenced fertilizer and crop protection applications are possible only with a highly efficient overall unit consisting of a tractor, a terminal, and device functions. The compatibility and conformity of all components—right down to the last detail—are what’s required. (Fig. 1)

The ISOBUS standard (defined in the ISO 11783 standard series) has ensured manufacturer-independent compatibility between tractors, accessory equipment, and agricultural software on office PCs since 1991. Founded in 2008, the Agricultural Industry Electronics Foundation (AEF) is actively promoting this topic in order to further develop this common international standard at all levels—and to optimize communication and data exchange. It brings together different manufacturers of agricultural machinery and components. The compatibility of new components is checked, their conformity tested, and new standards are thus defined. These concern all relevant components of the supply and communication chain—from common interfaces and transmission protocols to uniform hardware. The AEF thus defines the basis for the products’ certification according to the ISOBUS standard and enables compatibility between different manufacturers’ components. Connector specialist Erich Jaeger is an AEF member. As part of a subgroup that focuses on developing and standardizing connectors, it works to consistently push ISOBUS development along.

ISOBUS is tucked away in many components and various functions. These can therefore also be used across devices. And this is the only way the desired plug-and-play works. With its plug sets, components, and accessories, Erich Jaeger covers the entire spectrum of the ISOBUS Breakaway Connector (IBBC). In developing the connector system, the company was guided by the specifications of several well-known agricultural machinery manufacturers. The system thus meets very high requirements in terms of temperature resistance (from -40 °C to +95 °C), environmental and medium-based influences, electromagnetic interference, and short-circuit protection. This guarantees functionality even in extreme situations. All components comply with the ISO 11783-2 standard. The various model variants include, for example, active and passive sockets as described in the standard. (Fig. 2)

In accordance with ISO 117 83-2, active (master) is usually installed at the rear of the tractor. The socket has an internal connection between ECU_PWR (ECU = Electronic Control Unit) and TBC_PWR (TBC = Terminating Bias Circuit), and thus ensures the terminator circuit’s electrical supply. It supplies the terminator circuit of all sockets in the bus segment. With this configuration, no more than one master socket may be installed on a towing vehicle.

Passive (slave), on the other hand, is used on accessory equipment and possibly at the front of the tractor. ECU_PWR and TBC_PWR are not connected for slave sockets. Here, the supply must be external; otherwise, the TBC remains unable to function. This also means that if the terminator circuits of all sockets on the towing vehicle end are supplied via the tractor, only slave sockets (i.e. no master sockets) can be used. (Fig. 3)

Erich Jaeger has also optimized the existing plug connectors of the ISOBUS system according to customer specifications for Fendt, the globally active agricultural machinery manufacturer. Here, the electrical supply for the TBC is also provided by the towing vehicle. For this reason, only slave sockets are used. Wolfgang Wiese, Managing Director at Erich Jaeger, reports: “Erich Jaeger can look back on a long partnership with Fendt. With regard to the ISOBUS socket, the agricultural machinery manufacturer wanted to optimize the existing system. With the conventional ISOBUS connection, there was a risk that a short circuit in the accessory equipment—caused, for example, by a defective cable—could damage the electrical system of the tractor or trailer. A special circuit should prevent this from happening.” The company’s development department therefore reworked the ISOBUS socket’s electronics and implemented a corresponding protection circuit within the TBC_PWR circuit. If the current at terminal TBC_PWR rises above 2A due to a short circuit, the protective circuit registers this and cuts off the current. This eliminates the risk of damage to the electrical system. The result of this development is the passive socket with current monitoring (CM). The CM socket has a green insert to differentiate it from the other ISOBUS sockets. (Fig. 4)

As an AEF member, Erich Jaeger is also actively involved in further developing the ISOBUS standard. The development of the socket for twisted-pair physical layer (TPPL) as described in the current edition of ISO 11783-2:2019 is an example of what’s currently in the pipeline. This connector is a more cost-effective system intended for use in smaller tractors and accessory equipment. TBC_PWR and TBC_RTN are not used here; there is no differentiation between active and passive. However, the system offers full backward compatibility with current ISOBUS accessory equipment. This development can be found in the third edition of ISO 11783-2, published in April 2019.

An impending developmental step comes in the form of realizing HSI connectors for high-speed data transmission. This future generation of connectors is geared to manufacturers’ and farmers’ desires for even higher data transmission rates, such as those required for M2M communication, for electronic support and for diagnostic functions, or for real-time video systems. Data transmission rates of up to 1 Gbit/s—otherwise known only from high-performance Ethernet networks—are required here.

Moving forward, the continuous development of ISOBUS will make agricultural equipment, components and processes safer, more precise, and more efficient. Erich Jaeger will continue to accompany this development as the worldwide market leader for connectors between towing vehicles and trailers within the framework of the AEF. Because ISOBUS-compliant plug connectors are a functional part of a vehicle’s overall system networking. This is the only way to effectively support and expand digitization in the agricultural machinery and commercial vehicle sectors. Furthermore, it’s only with increasingly intelligent and efficient processes that modern agriculture will be prepared for the challenges of the future. 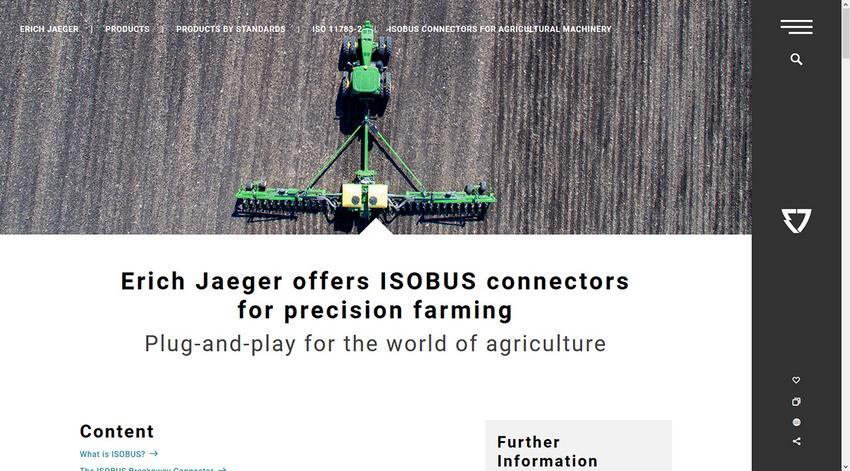 For more than 90 years, ERICH JAEGER has been developing and manufacturing high-quality connector systems for different branches of industry, particularly the light and commercial vehicle sector. Considering the digitalization, the global market leader for connections between towing vehicle and trailer increasingly develops smart components which play an important functional role to interconnect all automotive systems.

Pressemitteilung Plug-and-play for the world of agriculture weiterempfehlen