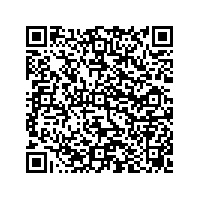 3.7 per cent less private insolvencies – strong increase in the case of young adults

(PresseBox) ( Hamburg, 26.06.12 )
During 1st quarter 2012 32,760 German citizens filed for private insolvency. In comparison with the reference quarter 2011 this corresponds to a decline by 3.7 per cent. The current survey “Debt Barometer 1st Quarter 2012”, carried out by the Hamburg financial information agency Bürgel, arrives at this result. According to this, last year’s trend towards decreasing case figures with regard to private insolvency is also persisting in 2012.

“The situation has recovered particularly as a result of the improved development in the economic and employment markets,” according to Dr. Norbert Sellin, managing director of Bürgel, in explanation of the decreasing number of private insolvencies. For the current year Bürgel expects 132,000 private insolvencies in Gemany. However, there are some less positive aspects: “Due to the fall in the unemployment rate – unemployment is regarded as the main reason for private insolvency – the decline should have been greater,“ Dr. Sellin explains. “Furthermore, the rising insolvency figures among young adults and older citizens from the age of 60 upwards are giving cause for concern.“

Firstly, the number of private insolvencies in the age group of German citizens over the age of 60 has risen by plus 1.7 per cent. Those affected in this case are mainly men: In comparison with the reference quarter of 2011, the number of male debtors has soared up by 5.9 per cent whereas the share of female debtors in this age group has fallen by 4.1 per cent. Particularly endangered in this age group are employees with low income, those with marginal or limited employment contracts or part­time jobs. A regressive pension level, unemployment and low salaries tend to threaten more and more people with old­age poverty.

Secondly, in a comparison of the quarters the insolvency rate among young adults between 18 and 25 years of age has risen dramatically: by more than a third (35.6 per cent) to 2,980 cases. This group can be distinguished by uneconomical housekeeping and little experience in handling money.

In addition, income and consumer behaviour of those affected are often not compatible. For instance, in particular those in the group of 18-­ to 25­-year-­olds often invest large sums in mobile communication, electrical goods, cars and in instalment buying and credit card purchases. In addition, the young adults have no or insufficient reserves for times of crisis.

“An inadequate financial overview and financial planning that is not in keeping with one’s budget play a key role in the causes of overindebtedness in this age group,“ is how Bürgel managing director Dr. Norbert Sellin explains the rise in private insolvencies among the 18-­ to 25-­year­-olds. In this age group even debts below 10,000 euro are sufficient grounds for having to file for private insolvency. This means that the debt size among the 18-­ to 25­-year­-olds lies below the federal average of approx. 32,000 euro.

According to absolute figures during the first quarter 2012 North Rhine­-Westphalia was the federal state with the most insolvent private persons (7,297 cases). Also the states with a high population density, Lower Saxony (4,338), Bavaria (3,780) and Baden­-Wuerttemberg (3,360) come off badly. With regard to relative figures – private insolvencies per 100,000 head of population – there is a definite north­south decline. Most insolvencies were recorded in Bremen (74 cases per 100,000 head of population), followed by Lower Saxony and Schleswig­-Holstein (both 55). Whereas the proportion in Mecklenburg-­West Pomerania (40 cases per 100,000 head of population) lies within the level of the federal average, the rate in Bavaria (30) and Baden­-Wuerttemberg as well as Thuringia (both 31) was the lowest.

During the first quarter 2012 the number of cases in 14 federal states showed a downwards tendency – only in Berlin (plus 2.7 per cent) and Bavaria (plus 0.8 per cent) did the values increase slightly in comparison with the same quarter of the previous year. Meanwhile Bremen with minus 15.6 per cent can claim the greatest decline in private insolvencies, followed by the Rhineland­-Palatinate (minus 12.1 per cent) and Thuringia (minus 11.2 per cent).

57.8 per cent of all cases of overindebtedness are caused by men. This male dominance is apparent in almost all age groups. The imbalance is particularly distinguishable among the 36-­ to 45-­year-­old debtors with a male proportion of 60.7 per cent. The only exception is the group of 18- to 25-year-olds. Here, the women filing for insolvency were in the majo­ rity during the period examined with a share of 52.8 per cent. 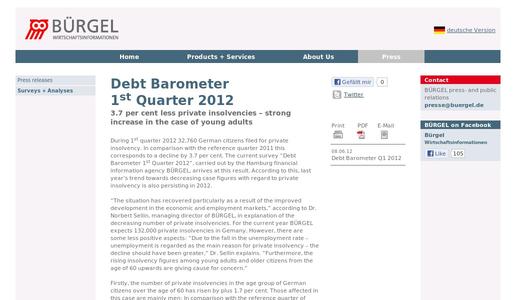 With 60 offices in Germany Bürgel Wirtschaftsinformationen GmbH & Co. KG is one of the
leading agencies for financial and solvency-relevant information as well as debt collection
services. BÜRGEL is a subsidiary of the Euler Hermes Deutschland AG (Allianz Group) and
the KG EOS Holding GmbH & Co. KG (Otto Group).