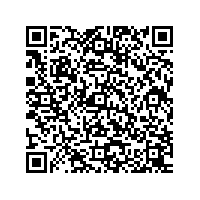 (PresseBox) ( Hamburg, 26.06.12 )
The number of corporate insolvencies falls during 1st quarter 2012 by 0.2 per cent to 7,405 cases, compared with the reference quarter of the previous year. The current survey “Corporate Insolvencies 1st Quarter 2012“, carried out by the Hamburg financial information agency Bürgel, foresees between 29,000 and 30,000 insolvent companies in Germany over the whole year 2012. “With regard to the corporate insolvency figures this means that the pre-crisis level has been reached”, was the comment by Bürgel’s Managing Director Dr. Norbert Sellin on the current statistics. As the German economy is currently experiencing an upwards trend despite the European debt crisis, the leading economic institutes reckon with an increase in the real GDP by 0.9 per cent in 2012. This optimism is not even slowed down by the unsolved debt and confidence crisis in the eurozone although it is still threatening the economy in Germany. Bürgel expects the decline in corporate insolvencies to persist in 2012 – by minus one to minus four per cent.

In addition, statistically speaking, newly founded companies that are not older than two years are wound up before the bankruptcy courts more frequently than established companies. In comparison with the 1st quarter 2011, the number of insolvencies in this age group has risen by four per cent to 1,957 cases. Altogether 26.4 per cent of all corporate insolvencies during the survey period fall on young companies. “Dynamic company-founding activity is on the one hand of great significance for Germany. But on the other hand it claims its victims, as the rising insolvency figures in the case of young companies go to prove,” are Dr. Sellin’s comments. In the start-up phase it is particularly a lack of capital backing that causes financial problems. Besides this, newly founded companies often fail as a result of business ideas that are not in line with the market. Also, changes in the market, strategic wrong decisions and the lack of internal entrepreneurial competence are especially detrimental to them.

In 12 out of 16 federal states, the insolvency values have decreased during 1st quarter 2012. Here, Bremen (minus 31.6 per cent) ahead of Saxony-Anhalt (minus 30 per cent) and Brandenburg (minus 27 per cent) score best. Meanwhile, in particular North Rhine-Westphalia (plus 25.3 per cent), Bavaria (plus 7.2 per cent) and Baden-Wuerttemberg (plus 6.3 per cent) are having to cope with growing case figures.

The largest share of 44.3 per cent in the corporate insolvencies according to their legal form is held by the independent business people and sole proprietorships with 3,281 cases. Also numerous GmbHs (German limited liability companies) with a share of 25.2 per cent end up in front of the bankruptcy judges. Whereas the insolvency rate is on the increase in the case of the newly founded companies, the share held by companies with at least 50 years of market activity has fallen by 19.2 to 2.2 per cent in comparison with 1st quarter 2011. The most important reasons for corporate insolvencies are firstly the lack of new orders, or the cancellation or postponement of already placed orders. Secondly, domino effects cause insolvent companies to drag other companies with them into bankruptcy. Thirdly, internal mistakes, for instance in the management, and the lack of equity capital often increase the insolvency risk.
http://www.buergel.de/... 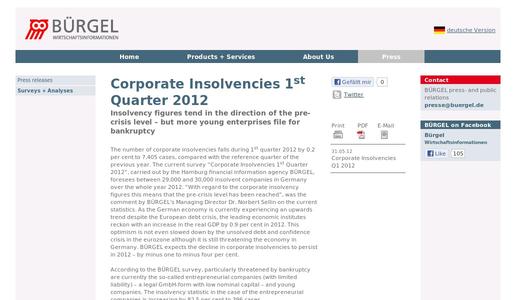 With 60 offices in Germany Bürgel Wirtschaftsinformationen GmbH & Co. KG is one of the leading agencies for financial and solvency-relevant information as well as debt collection services. BÜRGEL is a subsidiary of the Euler Hermes Deutschland AG (Allianz Group) and the KG EOS Holding GmbH & Co. KG (Otto Group).