asknet Reports Strong Sales Performance for 2017 and Returns to Profitability

News abonnieren
(PresseBox) ( Karlsruhe, 13.04.18 )
asknet AG, part of the Swiss-listed international technology and media company The Native SA (www.thenative.ch), significantly improved its business situation in 2017 and returned to profitability. The entry of the new majority shareholder, The Native SA, in November 2017 and the related capital increase further strengthened asknet's financial position, reflected in the high cash flow. Furthermore, the company remained without financial liabilities as of the balance sheet date.

Operationally, the asknet group achieved major sales successes in the reporting period. In the Academics Business Unit, the expansion of the cooperation with long-standing partner IBM to the Scandinavian market deserves special mention. The cooperation with ANSYS Inc. the world’s leading manufacturer of simulation software, which was announced in December 2017, is another great achievement. The eCommerce Solutions Business Unit was also able to continue the successful sales performance of the previous year and won a total of nine new customers in 2017. Investments in technical and structural improvements represented another focus in the past financial year. Based on the continuously strong sales performance, and with a new partner at its side, asknet’s business situation will continue to gain momentum in 2018 and beyond.

“Over the past years, we have implemented a number of measures and programs to generate new growth. The entry of our new majority shareholder, The Native SA, in November 2017 is another key element for successfully shaping the future of our company and opens up additional opportunities. The entry has been well received by our customers and partners and has strengthened our position in the market. Operationally, we are also experiencing a clear tailwind, as can be seen from a large number of new customers and sales partnerships,” commented Tobias Kaulfuss, CEO of asknet AG.

“The cooperation with The Native SA holds considerable synergy potential for the eCommerce Solutions Business Unit, where we not only want to share resources but also win new customers together adding content marketing and other competences to an already very competitive eCommerce Services suite of asknet AG. In the Academics Business Unit, we aim to further consolidate our market share in the core German-language markets and to expand our business in carefully chosen new European markets. Both Business Units had a promising start to the new year, enjoy full business and financial support of The Native SA and are now at the core of The Native SA business strategy,” commented Sergey Skaterschikov, Chairman of the Board of Directors of The Native SA and CFO of asknet AG.

The Executive Board of asknet AG projects a strong increase in consolidated gross profits for the full year 2018. Against the background of further investments in the technological basis and additional human resources, earnings before taxes (EBT) are expected to remain positive.

The full Annual Report for 2017 is available on the company’s website at www.asknet.com. 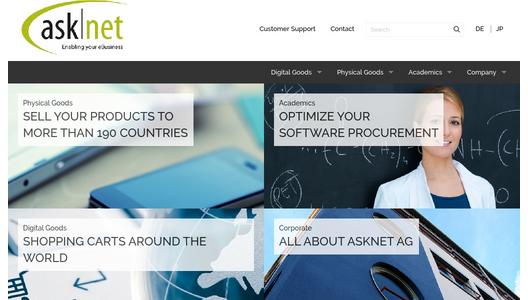 asknet Group is an innovative supplier of e-business technologies and solutions for the global distribution and management of digital and physical goods. Founded in 1995 as a spin-off of the Karlsruhe Institute of Technology (KIT), the company is a pioneer of modern e-commerce with over 20 years’ experience in the field. asknet’s eCommerce Solutions Business Unit (previously Digital Goods and Physical Goods Business Unit) enables international manufacturers to successfully market their products in over 190 countries. The core product, asknet eCommerceSuite, covers the complete sales process and is suitable for manufacturers of both digital and physical goods. In addition, the company offers stand-alone services and solutions along the value chain. asknet’s Academics Business Unit assists customers from the research and education sector in purchasing and managing software and hardware. Thanks to its close relations with over 80% of Germany’s universities and research institutions, asknet is intimately familiar with their needs and requirements and can offer them specific solutions. asknet is part of The Native SA, the Swiss-listed content marketing, technology and e-commerce services group. For more information, visit www.asknet.com and https://investor.thenative.ch.

About The Native SA
The Native SA is the Swiss-listed (NTIV: SWX) international technology and media company that enables corporate clients around the world with the best-in-class e-commerce, data analytics and blockchain technologies, payment services, customer support, and content & digital marketing.