ANNOVA and S4M join forces for this year's NAB Schow 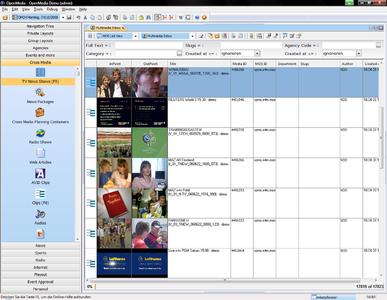 (PresseBox) ( Munich, 24.03.09 )
ANNOVA Systems, developer of the advanced solution for professional news management, OpenMedia, will be partnering with Cologne based S4M – Solutions for Media for a joint presence at the NAB Show 2009 to be held from April 20 to 23 in Las Vegas, Nevada. ANNOVA will showcase the new version 3.6 of OpenMedia in two variants: the Open MEDIABOX, a standard package for midmarket customers, and a highly configurable enterprise version. As a special highlight, ANNOVA will launch 4MORE, a new, independent video management module for OpenMedia, based on S4M’s Video Production Management System (VPMS) and offering professional ingest, editing, and playout capabilities. Visitors to the NAB Show will find ANNOVA and S4M in hall 4, booth no. SU10224A/F.

For the first time, the new version 3.6 of ANNOVA’s flagship product, OpenMedia, will be on show in Las Vegas. It comes in two variants: The Open MEDIABOX takes the form of a virtual rack enclosing components from Quantum, Omneon, Chyron, and ANNOVA’s Open Media 4MORE independent video management modul, all seamlessly integrated and tuned to each other. 4MORE provides browsing, retrieving, and editing of texts and associated video footage as well as adding voice-overs.
Open MEDIABOX the preconfigured solution is provided for customers in the midsize market segment in search for a turnkey solution, with enterprise level equipment but affordable within a limited investment budget.

The enterprise OpenMedia version 3.6 solution now features an enhanced planning container. This module serves to track the planning of news items and its capabilities to share data and media across multiple production units such as radio, TV, or Web departments have been greatly improved. The Event Calendar, a new planning module for OpenMedia, offers daily, weekly, and monthly views, and appointments and events can be automatically entered from agency sources. This module is particularly useful for large projects and coverage of major events, allowing journalists to identify, locate, and access all contacts, sources, reference files, research, video, and other data related to a particular event.

ANNOVA and S4M will be partnering for a joint appearance at this year’s NAB Show. S4M – Solutions for Media will showcase its integrated broadcast management systems as well as software solutions for the professional management of digital video assets. S4M’s enterprise solutions managing individual stations, station groups and networks include systems covering license and rights management, program planning and scheduling, traffic, ad sales and optimisation as well as video content management. Amongst others, S4M presents the latest member of its product family: ClipJOCKEY – a studio production tool tailored to the needs of TV broadcasters and production companies.

ClipJOCKEY supports the daily processes carried out in control rooms. At the same time, it enables migration into a file-based environment. The tool corresponds to a scope of features that amongst many others is provided by VPMS, S4M’s video production management system. The difference: ClipJOCKEY focuses on core workflows in control rooms and covers the special needs of TV broadcasters and (post)production companies regarding ingest and playout functionalities. For instance, MOS-enabled news formats can be carried out tapeless. Likewise, the pre-production of TV magazines may be accomplished without tapes. Especially to that end, S4M has developed the “add-on mode” allowing the same comfort that hitherto was only possible in a tape-based context. In doing so, a “multi-channel link feature” supports key-fill applications and multi camera productions.

“We are most excited about the upcoming launch of Open MEDIABOX and 4MORE in Las Vegas, and extremely pleased to be able to exhibit jointly with S4M at this year’s NAB Show,” says Michael Schueller, CEO, ANNOVA Systems GmbH. “The 4MORE module is an exceedingly valuable addition to OpenMedia for TV newsroom solutions and it helps deliver maximum productivity solutions at highly competitive price tags.”

ANNOVA’s presence at the NAB Show in Las Vegas is part of its long-term strategic move to globalize its sales and marketing scope. Presently, the company is extending its reach to the North American market and is seeking partnerships for product sales and support in this region.

ANNOVA Systems GmbH provides software, development, consulting, and implementation services for the broadcast industry. With over 10,000 users, its flagship OpenMedia solution is considered to be one of central Europe's leading enterprise newsroom systems on the market today. ANNOVA was formed in early 2008 by top executives of the German subsidiary of New York based Dalet Digital Media Systems. ANNOVA subsequently acquired Dalet's OpenMedia activities, which had hitherto been limited to Germany, and have since commenced to expand them on a wordwide basis. Additional information is available upon request or from our website at www.annova-systems.com.

ANNOVA to demo OpenMedia at CABSAT 2009