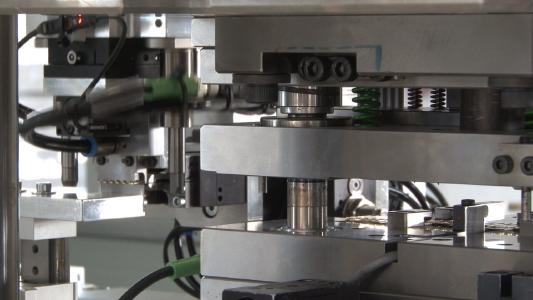 A housing consists mostly of contacts and bushings which are overmoulded with thermoplastics such as PA, PBT or, more rarely, PPS. Stamped parts are supplied on a rolled-up strip. These are then bent and separated directly ahead of the injection moulding machine. To prevent any contamination of the plastic hybrids this is, of course, carried out without the addition of oils, fats or other such lubricants which could infiltrate the machinery.

Additional inserts such as retaining pins with no electrical function and membranes for pressure equalization are also processed. Loose parts supplied as bulk material are, for example, fed into the handling unit via a vibrating spiral conveyor. In principle, any method of supplying the parts which transfers them to the pick-up point in the correct position can be integrated. Particular care must be taken here to ensure the prevention of any kind of contamination. In special cases it is also necessary to check the geometrical characteristics of an insert in order, for instance, to be able to determine whether any abrasive medium has remained in the surface finished parts.

For the large quantities usually required for these applications it is not sufficient, in the case of a conventional injection mould, to increase the number of cavities. This would mean that unnecessarily high clamping forces and therefore extremely large injection moulding machines would be required. The risk of an insertion error increases exponentially with the number of cavities to be simultaneously fitted. This can result in damage to the tool, which in turn leads to an increase in rejects as well as unintentional downtime of the expensive machinery. Furthermore, the insertion time, as a rule the bottleneck with such products, must be added to the actual injection time. To some extent this significantly reduces the productivity of the machine.

So how is it possible to separate the injection moulding process from up and downstream processes? And is there a possibility of subdividing the injection moulding process consisting of “closure of slider and mould”, “injection”, “ build-up of dwell pressure ”, “residual cooling time”, and finally “ opening of slider and mould”? For this task there really are varying solutions.

At 2E mechatronic two different fully automated solutions on several machines are at present in operation. We should take a closer look at one of these, namely efficient automation using a turntable injection moulding machine.

In this process the whole ejector side of an injection mould is produced several times and each time is rotated under the injector side for the overmoulding process. The demands placed on the toolmaker are higher than for a comparable standard tool as several lower moulds have to be designed to be compatible with a single upper mould. He must, however, take the greatest of care to ensure that the duplicated parts are identical. Consequently, any adjustments made in one cavity must always be considered in relation to the results from the corresponding cavities in the other ejector sides. The injection moulding process is also of particular importance as any variation in the balancing of the cavities in the lower moulds can lead to dimensional variations which could then not be corrected. This must already be taken into account when designing the tools.

2E mechatronic uses turntable injection moulding machines with 120° divisions, namely three ejector sides and one injector side. The first position is used to deposit the inserts and close the sliders via the handling system. The advantage here is that the inserts are accurately secured by the placement head until the slider has closed. The grippers are equipped to immediately detect whether a component has been lost. This will in turn stop the machine, thereby preventing tool damage and downtimes. The lower mould is subsequently rotated under the injection unit, injected and dwell pressure applied. The process pauses for approximately 1/3 of the residual cooling time after which the mould continues to rotate. The remaining 2/3 of the cooling time can be spent outside the injection unit. The sliders are opened and the component can be transferred to the downstream testing and finishing processes. As the residual cooling time accounts for by far the largest proportion of the injection process, it is possible to achieve a cycle time reduction of 40-50% compared to a conventional injection process. The insertion and ejection processes do not affect the cycle time. Only the rotating process must be added on.

After completion of the injection moulding, the downstream processes such as the attachment and welding of a pressure equalization element or something similar are carried out prior to the automated inspection of the components. Continuity, short-circuit and fill tests are completed by means of an automated visual inspection. Following successful inspection the components are marked and subsequently packaged automatically.

2E mechatronic GmbH & Co. KG produce plastic hybrids of the highest standards using automated processes. Complex technical measures are required to achieve the high level of dimensional accuracy and cleanliness demanded. Scaling up conventional processes very quickly leads to technical difficulties and does not allow for cost-effective production. Using a turntable injection moulding machine makes it possible to decouple the placement of inserts and the ejection from the injection moulding process. Even the latter can be shortened by 40-50% by separating the process. In particular for the production of large quantities this results in sustainable advantages of time and cost which can be used to achieve highly cost-effective production.

Hybrid components for the highest demands